For full decades, the probability of the existence of life outside our planet has been theorized, which have tried to be supported through photographs and videos, many blurred, others clearer, but all with the intention of convincing people that they are authentic and that we are not alone in the universe.

Even this topic has become so much a part of popular culture that movies and video games have even been made based on this probable extraterrestrial experience.

And again this topic causes a stir again after a photograph of a UFO (Unidentified Flying Object) taken in 1990 in the United Kingdom was recently shared on social networks. This image has become the latest proof that intelligent and extraterrestrial life is a reality, as well as being part of the Calvine case.

It was on August 12 when the UAP Media portal shared the photograph declassified by the UK government that would reveal another clue to what happened on August 4, 1990 on the Scottish hillside.

For many years, the Calvine UFO (unidentified flying object) case was kept completely secret while theories circulated that “Dark Projects” were being carried out near Calvine, in the United Kingdom. 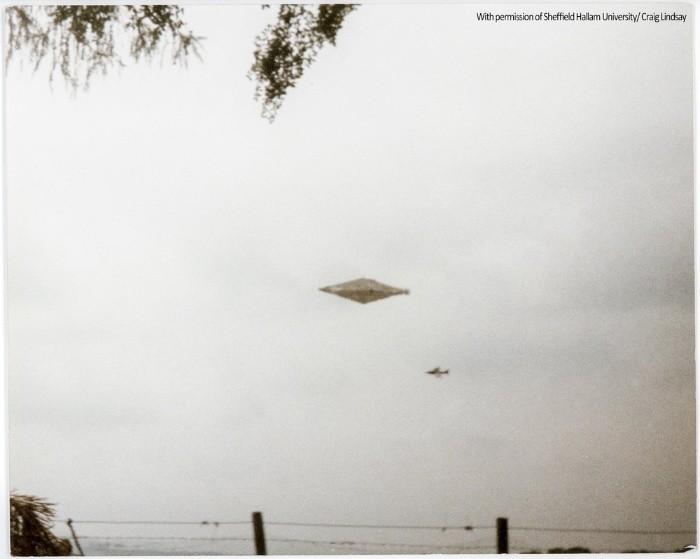 This photograph was captured by two young British men from Calvine, and was kept hidden for more than 30 years by the UK government. Photo: UAP Media

What is the Calvin case?

‘Calvine’ is the name that the United Kingdom Ministry of Defense gave to this particular “event”, when on August 4, 1990, two young people managed to photograph a strange 30-meter-long flying object in Calvine on the Scottish Slope.

The story goes that it was around 9 p.m. on Saturday, August 4, 1990, when two men who were on the side of a hill near Calvine, a small town located just off the main road northwest of Perth, Scotland, managed to capture six color photographs of a large diamond-shaped ship in the twilight of a summer day.

The boys managed to observe how this ship approached their position for about ten minutes, and then shot vertically at a relatively high speed.

The Calvine UFO case is probably the most enigmatic and famous case of the last 35 years, as this British ‘UFO’ took place on a remote Scottish hillside one night in August 1990, but it was for decades that this event left those who witnessed it stunned. they investigated, and not only because of the mysterious nature of the craft that managed to be observed.

The simple and mysterious fact that the local press never reported on the story of that August night baffled many, in addition to the fact that in recent years information has been found that suggests that the terrestrial “black projects” are completely related to him.

However, the case gained strength again after it is taken into account that the Ministry of Defense (MOD) decided to hide certain details of the Calvine case until 2076, as well as the suggestive participation of a former civil official of this same Ministry exactly 32 years after the month in which it occurred.

Here we leave you a video that better explains this mysterious case that has been theorized for decades:

For his part, the ufologist and journalist Jaime Maussan retweeted said photograph of a user on Twitter, in which the flying object can be clearly observed.

“Last minute: the original photograph of which the United Kingdom Ministry of Defense is aware has been revealed, and with this its veracity is confirmed, and it may be the best image to date of a 100% real UFO,” the expert tweeted. Mexican.

Last minute: the original photograph of which the United Kingdom Ministry of Defense is aware has been revealed, and with this its veracity is confirmed, and it may be the best image to date of a 100% real UFO.