Rubén Pérez takes Route C125 every day. He points out that once a week, the electronic payment system does not work. “The driver tells you: ‘The card doesn’t work.’ But it is better to use it because sometimes there is no change to pay in cash”. As he waits for a unit, he remembers that on a few occasions he has lost 50 cents for paying cash with 10 pesos. The machine keeps the remainder.

According to the Ministry of Transportation (Setran), Fines for not using or failing to operate the prepayment system installed in trucks are on the rise. In 2020, when the electronic payment equipment was installed, 1,035 sanctions were lifted, but last year they increased to 1,739 and during the first half of the current year, 1,325 have already been issued.

The agency reports that Route C125, which has two routes to Tlajomulco, as well as T17 (before 632), are the ones with the highest number of fines in the last two years.

Karina González adds that on several occasions she has not been able to pay with the card. “Sometimes the little machine doesn’t work and you have to give the trucker the money, or you deposit it in a little box they have. Sometimes it doesn’t even recognize your currency and you have to pay another ticket.”

“This Route T17 unit did not allow me to deposit the ticket in the piggy bank. The driver told me that I had to hand it over to him,” denounces Luis Cruz.

Another user reports that this route was not allowing the payment to be deposited in the piggy bank, so Setran responded through its social networks that the unit had been violated “for applying conditions other than those authorized.”

“It gets very complicated with that card”

Silvia Maricela Meza refuses to acquire the Mi Movilidad card to pay for public transport trips, because she considers that she spends more money, although she regularly pays 10 pesos for each trip; that is, she loses 50 cents on each move.

“My husband is the one who uses it. You put 100 pesos and suddenly six or seven tickets and he no longer has anything. It does get very complicated with that card.”

He insists that he prefers to “load loose” and thus cover his expenses on the trucks. “I deposit it in the machine to avoid that kind of thing… like him who sometimes said that he did have a balance on the card, he put it in and he no longer had anything; I walked by with him. I don’t know what happens in the little machine that is overcharged or I don’t know”.

The problem is that Maricela almost always pays with 10 pesos. “Many times also small 50-cent coins, the little machines do not accept them, you fight them.”

Sometimes he gives the driver the 50 cent coin, if he agrees to have the payment made this way. “You put the money in and only the little coin is what you give to the driver because the machine rejects them. It doesn’t seem like it to me because 50 cents at a time… for example, right now I’m going to take four trucks and they are two pesos that can be used for another truck”.

In July 2020, the Federation of University Students (FEU) filed a complaint with the Specialized Prosecutor for the Fight against Corruption to investigate the case of the piggy banks installed in public transport, which do not give change for 50 cents, pointing out that they keep around 1.1 million pesos a day.

Three months later, the Anti-Corruption Prosecutor, Gerardo de la Cruz, reported that there were two open investigations: one based on the recommendation issued by the Jalisco State Human Rights Commission (CEDHJ) on the subject, and the second that of the FEU.

These complaints were shelved. Via Transparency, the Prosecutor’s Office responded that In the last four years, 12 complaints were filed for alleged acts of corruption involving collective transport, of which five were sent to temporary archive and another five were refrained from investigating.

The above correspond to the complaints filed between 2018 and 2021. Only two are under initial investigation, filed last year and in the current year.

Therefore, the agency clarified that to date there are no people linked to the process or sentences.

The defendants or probable defendants in the complaints filed work or worked in the Secretary of Transportation (Setran) and the Court of Administrative Justice. The latter is pointed out in only one investigation.

According to the dependency, there is no particular indicated. The businessmen identified in the middle of this year are part of an investigation by the State Prosecutor’s Office.

Last July, this last dependency reported that it was linked to the process against Hugo Maximiliano H. and Óscar Leonel H., allegedly responsible for the crime of specific fraud to the detriment of a concessionaire company of the extinct route 380.

The businessmen were hired to install equipment in the transport units, “without actually doing it.”

The events occurred in 2018, “when they were forced to install video surveillance cameras, electronic payment equipment, passenger counters and information screens; however, and despite the fact that those affected covered the amount of the equipment, these were never placed in the units, for which they filed the corresponding complaint.”

Genesis Hernandez, head of the Mobility Observatory, proposes that an area be included that has the power to communicate to the user what is happening with the 50 cents. 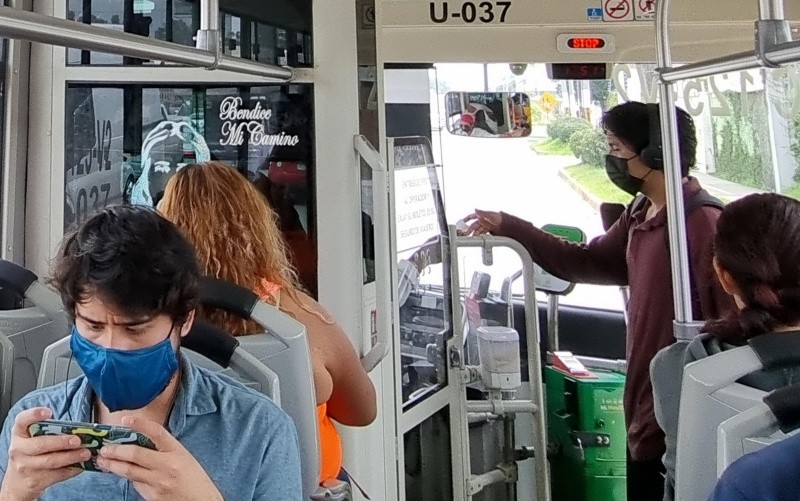 Although prepayment is one of the main elements of the new public transport system, it has not been enough and people complain about failures when paying. THE INFORMER. camacho

“It’s a big debt. To date, no clear data has been given on what has happened to that money,” highlighted the coordinator of the Mobility Observatory, in relation to the 50 cents that many users deposit as surplus in the public transport piggy banks that do not give change.

He points out that practically the rate is 10 pesos when the Mi Mobility card cannot be used due to system failures. “Sometimes they force users to pay in cash or the technology doesn’t work.”

Hernández Díaz comments that many people do not file a complaint because “sometimes the information is not at hand to generate the report. There is misinformation, people don’t know.”

He insists that despite the investigations that have been initiated into what are known as “thief piggy banks”, the authorities have not informed who is responsible for giving the information on the resources collected as surplus through them. “That they inform us for transparency. What’s going on? Who is keeping them? What are they using them for?

He underlines that the man-truck model no longer operates, but there are still ways to generate this type of collection process that affects users’ pockets.

Another of the pending, he says, is the recharging system, which should be more agile for the user, because sometimes, convenience stores do not have systems to carry them out. “In the sense that it can be generated with a bank transfer, for example.”

They point out the units for speeding

“It has touched me that truckers go super fast. She touched me in ’59 (T04-B3). The truck was going super fast, she braked and an already grown-up woman who was in the yellow seats fell and hurt her knee, ”recalls Karina González.

The user comments that the above happened less than a month ago. “The good thing that I was in the seats at the back and next to another person; I didn’t manage to fall, but other people went all the way forward because of how hard I braked.”

The young woman who uses public transport to go to her university and her workplace considers that there is not enough progress in restructuring public transport. “The trucks are very old, for example, the ones on that route; They don’t even have cleanliness”.

Last Thursday, The Secretary of Transportation (Setran) announced that the International Association of Chiefs of Police donated a team to measure speed in public transport.

This, within the framework of the initiative Bloomberg Philanthropies for road safety, which aims to reduce deaths and injuries resulting from traffic accidents.

The equipment will be used in transportation supervision operations in the Guadalajara Metropolitan Area.

“The radars that Setran received are Stalker LidarCam with speed control and capture laser precision photos; the field software works on laptops or tablets with Windows and in combination with a high-resolution digital camera, it is a tool that allows recording evidence of infractions in images or video, because through a camera shot it is possible to time a vehicle at high speed, as well as obtain data from it, ”the agency detailed in a statement.

Alma Chávez Gutt, from the Víctimas de Violencia Vial collective, highlighted that the use of technology has saved lives. The installation of speed radars in the ring road, he said, has made deaths from road accidents drop by 40 percent. 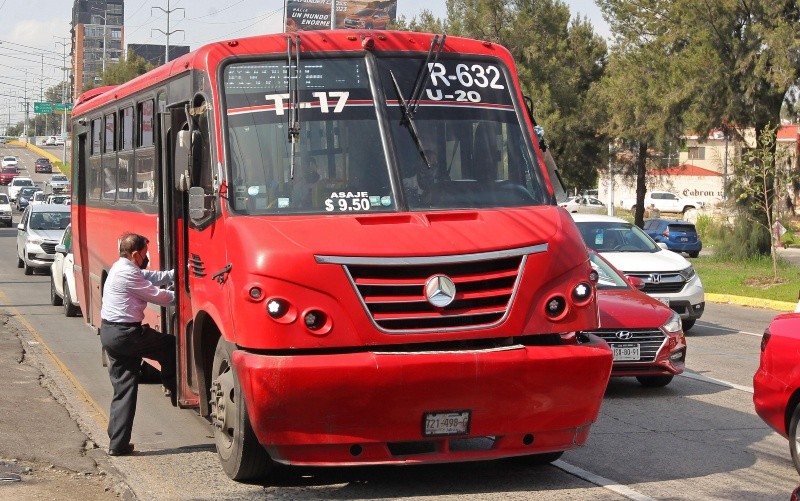 Route 632 is one of the routes with the most fines. THE INFORMER. camacho

Until last April, the state government had yet to renew 767 units out of a total of 1,953 that operated outside the norm. A thousand 465 were detected at the beginning of the current administration, the rest corresponds to trucks that already fulfilled their useful life last year and those that will be added in the current one. The commitment is that the pending vehicles be renewed in the remainder of the current six-year term. In 2020, 984 units were renovated with an investment of 480 million pesos. Last year 202 were added with a purse of 100 million pesos. For this year there is a budget of 197 million pesos to renew more than 350 trucks, pending the resource to allocate for next year, according to data from Setran.

They will regularize the motorcycle taxi service

Almost four years after the current state administration began, the authorities reported that motorcycle taxis will be able to continue operating in the city, as long as they accept the proposed regulation, provide the service only within subdivisions and do not circulate on main avenues.

To date, it has not been possible to solve the problem of the lack of public transport service in the new developments located on the outskirts of the city, so the regulation of motorcycle taxis is an alternative to cover this type of areas such as Santa Fe and Chulavista in Tlajomulco.

“Motorcycle taxis are a service that can work as long as it stays within housing developments. What cannot exist is the disorder that exists, what we have to do is order and establish that this service can work within those subdivisions, but motorcycle taxis cannot be circulating on main roads because they put users and drivers at risk ” argued the governor.

Another project to expand transportation coverage is to consider the start-up of Van-type trucks, through the service basin model that has been pending since the last administration.

These units could provide the service as feeders for Line 4 of the Light Rail to Tlajomulco. Similar trucks currently circulate irregularly in some metropolitan municipalities, mainly in Zapopan.

What do you think of the truck service?