Devastated by a fire, the forest of Brocéliande finds its visitors

On the Val Sans Retour circuit, domain of the fairy Morgane, their elf ears do not go unnoticed. “If we don’t wear them here, where are we going to wear them? exclaim the two creatures. Originally from Lyon and passionate about Arthurian legends, Aurélia and Arnaud go to the Brocéliande forest every year. “It’s a bit like a pilgrimage,” says the young woman. We love recharging our batteries in this very special forest. » 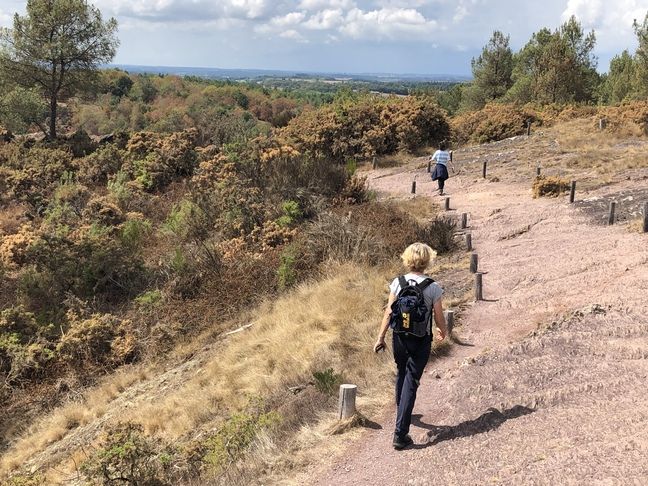 Banned for a week, access to the Brocéliande forest is again authorized. – J. Gicquel / 20 Minutes

Mythical heart of Brittany, the forest of Paimpont, better known under the name of Brocéliande, and which extends over nearly 9,000 hectares, has nevertheless known hell in recent days. During the night of Thursday to Friday, a violent fire broke out in the town of Campénéac, on the border between Morbihan and Ille-et-Vilaine. For two days, nearly 300 firefighters helped by two Swedish water bombers took turns on the spot to fight the flames.

Controlled since Sunday, the fire covered 630 hectares and destroyed nearly 400 hectares of vegetation. “It was very violent but fortunately the fire did not spread too much”, underlines a resident, evacuated like 150 other inhabitants of the sector as a precaution. The damage is however very important in the forest, already bruised in 1990 by a violent fire which had ravaged nearly 450 hectares.

Show of desolation in the forest of Brocéliande where nearly 400 hectares went up in smoke after the fire which broke out on the night of Thursday to Friday @20Minutes pic.twitter.com/lLwpOtMmro

The famous Golden Tree, a sculpture installed near the Mirror of Fairies, commemorates this terrible disaster which lasted nearly five days. This mythical site was spared this time, as were the Tomb of Merlin, the Fountain of Barenton, the Round Table of the Knights and the Hotié de Viviane. “But the fire still damaged some sites like The Tomb of the Giants,” regrets Maëva, an employee at the Brocéliande tourist office in Paimpont.

Brittany is not immune to the fires

In the small town, the flow of tourists resumed a little less than a week after the fire. “There was hardly anyone this weekend, apart from a few foreigners who hadn’t followed the news,” says this guide, who offers storytelling rides in a horse-drawn carriage. Access to the forest had also been prohibited since August 10 because of the risk of fire. “And unfortunately that happened,” sighs a cafe owner.

Since this Wednesday, the legendary forest can be visited again. To the delight of Virginie, who came from Lorraine with her two daughters to “look for fairies, goblins and goblins”. Behind her good humor, this mother does not hide her concern either. “It’s still dramatic what’s happening this summer, it’s burning everywhere,” she says. Even in Brittany, a region that is thought to have been spared by the fires. »

Last month, the Monts d’Arrée, another emblematic site of Brittany, had already been ravaged by a fire with more than 2,850 hectares which have gone up in smoke since July 18.