Angelina Jolie and Brad Pitt are still not done with each other six years after they split. Although the two have been officially separated for three years, they are still arguing about the children and their joint possessions. More and more is coming out in that process. Newly released FBI papers now show that the actress has charged her ex-husband for an attack on their private plane. It is the first time since the alleged incident in 2016 that more is becoming clear.

The story is not new: Shortly after Jolie filed for divorce in 2016, stories about the alleged incident have already surfaced. At the time, much was written about an alleged altercation between Pitt and one of the couple’s children, Maddox. In addition, the actor would have lashed out at the then fifteen-year-old boy and Jolie would have intervened. However, these stories were never confirmed.

In 2016, it was not officially announced that it was Jolie and Pitt. The FBI prepared an anonymous report about a fight on a private jet and wrote about a ‘Jane Doe’ who allegedly happened. (In America, “Jane Doe” is used as an anonymous name in lawsuits or when a body cannot be identified.) This led to an indictment, which the FBI subsequently did not pursue.

Jolie has indicated that she wanted to see her own testimony. She also made this request anonymously, as can be read in the documents in the hands of Puck News. “Mrs. Doe has still not been allowed to see the withheld information after years of trying. While this is about the safety of her children. The FBI has withheld evidence of suffering.”

Pitt allegedly shook Jolie and grabbed her by the head. In addition, he would have called her names and lashed out at their son Maddox. In front of the children, the actor would have shouted that Jolie “destroyed the family”. The now 47-year-old actress is said to have suffered an injury to her elbow, among other things. And Pitt (now 58) is said to have caused $25,000 in damages from spilling red wine because he was so drunk.

The appearance of the details in the FBI papers is part of the settlement of the divorce. The world-famous actors have already officially split up: in 2019 their marriage came to an end. But because they are the parents of six children and also have a joint vineyard, the divorce is not yet complete. The vineyard has been arguing for years and Jolie sold her shares to get rid of Pitt. Another lawsuit is now pending.

Pitt and Jolie in 2014 with their children Pax, Maddox, Shiloh, Vivienne and Knox. 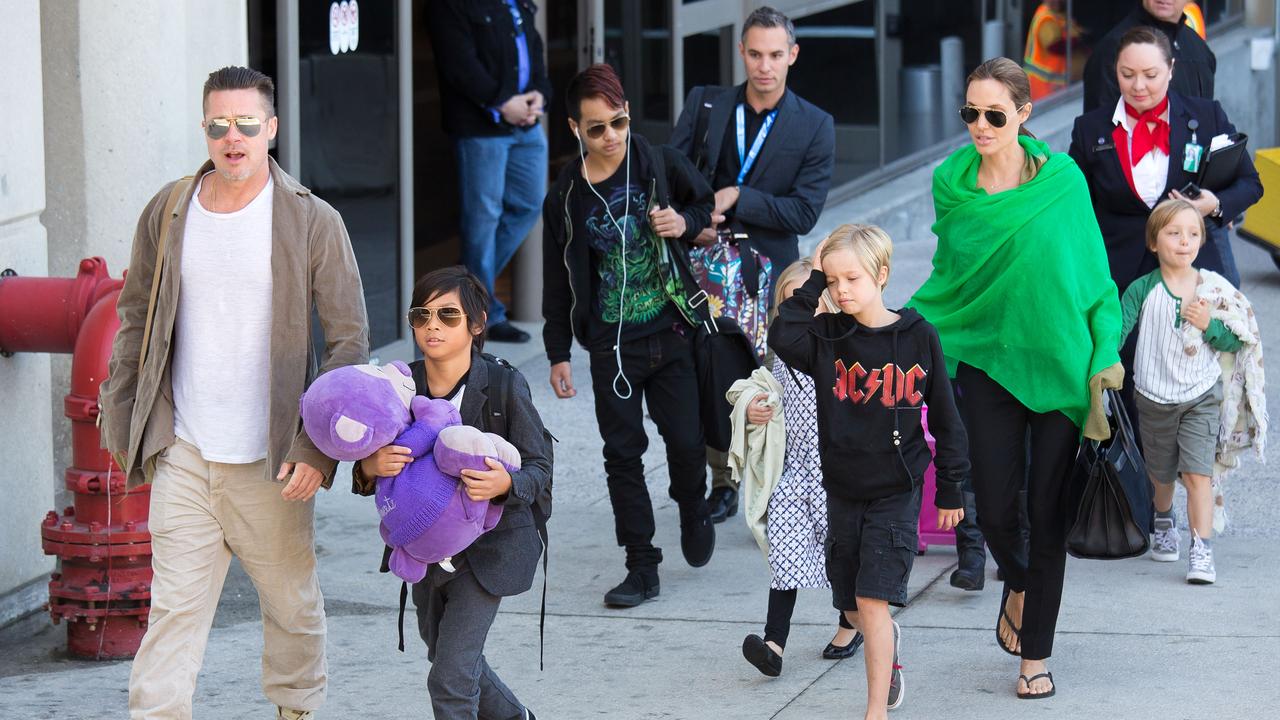 Pitt and Jolie in 2014 with their children Pax, Maddox, Shiloh, Vivienne and Knox.

The couple’s children are an important part of the feud between the two. Jolie wants full custody of the couple’s five more minor children, while Pitt is thinking of an equal division. The fact that the data about the flight is now coming out also has to do with this case: Jolie has been trying for years to prove that Pitt is not a suitable father.

Pitt and Jolie had been married for two years, but had been together for much longer: when the divorce was announced in 2016, they had been a couple for 12 years. Jolie was already mother to son Maddox and daughter Sahara when she started a relationship with Pitt. He adopted the two children a year later. The actor couple had four more children together: Pax, Shiloh and twins Vivienne and Knox.