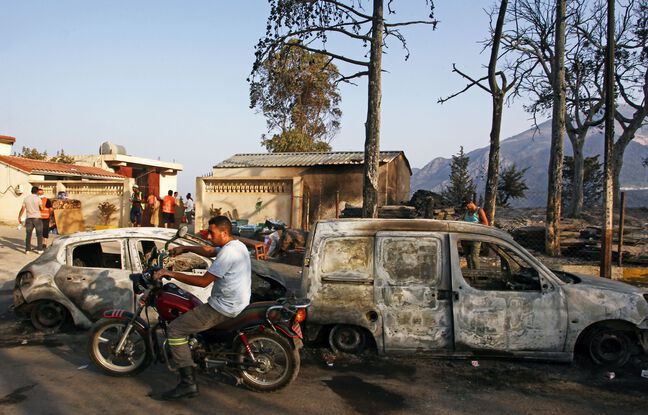 “Twenty-six people died: two in Sétif and 24 in El Tarf”, near the border with Tunisia, Beldjoud announced during the 8 p.m. television news. Several people suffer from burns or breathing difficulties but no new figures have been given on the number of injured.

A previous civil protection report reported four people burned to varying degrees and 41 others suffering from breathing difficulties in Souk Ahras, another town bordering Tunisia. Impressive images show residents of this city fleeing their homes in the face of flames. According to local media, more than 350 families have fled their homes in Souk Ahras. The gendarmerie closed several roads because of the fires.

“Thirty-nine fires in 14 wilayas (prefectures) are in progress”, indicated the civil protection by specifying that the wilaya of El Tarf records the greatest number of fires with 16 fires including a good number still in progress.

Water bomber helicopters intervened in three prefectures including Souk Ahras. Since the beginning of August, 106 fires have broken out destroying 800 hectares of forest and 1,800 hectares of coppice, said the Minister of the Interior. “Some of these fires are caused,” Beldjoud said. With the 26 dead on Wednesday, the balance sheet for the summer of 2022 climbs to 30 dead.

The largest country in Africa, Algeria has only 4.1 million hectares of forest, with a meager reforestation rate of 1.76%. Each year, the north of the country is affected by forest fires, but this phenomenon is accentuated from year to year under the effect also of climate change.

The summer of 2021 has been the deadliest. At least 90 people died in forest fires that ravaged the north of the country where more than 100,000 hectares of copses went up in smoke. Climate warming increases the likelihood of heat waves and droughts and, in turn, fires.