Vehicle verification: They call to comply to improve the environment and avoid fines

Four and a half months after the fines for not verifying the cars began (January 2023), Emanuel Carrillo, manager of the 0010 Verification Center, located on Cristóbal Colón Avenue, in Balcones de Santa María, asked citizens to do so in order to avoid sanctions, but also to be rewarded with discounts, “because that lowers a percentage of the endorsement.”

Although it had been announced that the punishments would begin last July, after acknowledging various flaws faced by the appointment system of the verification program in Jalisco, they were scheduled for January of next year. This, highlighted Emanuel, caused the number of drivers interested in checking to decrease because they are confident: “It decreased by 50% (since the extension of the term was announced), but we invite citizens to be responsible because it is for our benefit, to reduce pollution and the impact on health.

currently already There are more than 400 thousand verified vehicles.

To the drivers who come to verify, he recommended checking the tires, exhausts and that they do not have liquid spills, such as antifreeze and oil. He recalled that, if they do not pass, they are given 30 days to re-verify at no cost. While, in case of passing, the badge will be pasted on the upper right. 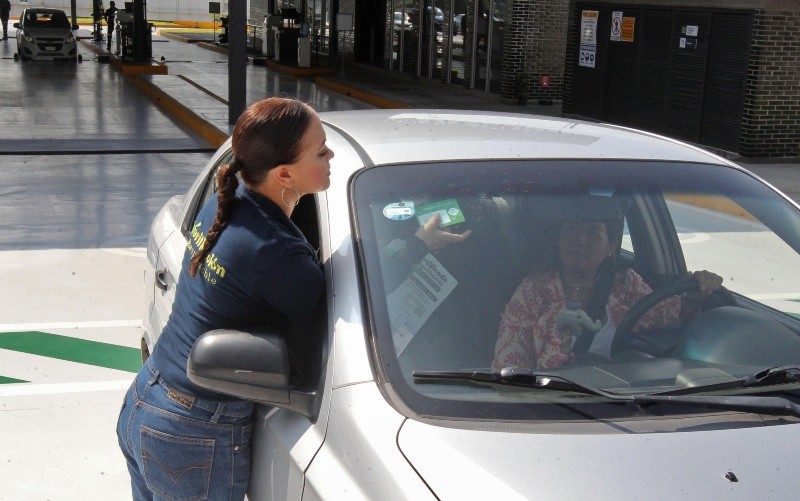 Although the fines were postponed, there are people who come to check their cars. THE INFORMER. camacho

For those who comply with the vehicle verification on time, the Ministry of Environment and Territorial Development (Semadet) reported that There will be economic incentives: 10% discount in the 2023 endorsement and 20% less for those who have foreign license plates and wish to exchange them for Jalisco plates.

These benefits are cumulative with others such as those granted to people with disabilities, older adults or those made by advance payments.

In the State, more than 400 thousand verifications have been carried out, taking into account that the calendar for citizenship in general began on August 1, 2021. From that day to date, the approval percentage is 82%, reported Semadet. This means that only 43% of the cars scheduled to be verified in the first year carried out that action.

Despite the fact that the fines were postponed until January 2023, the state agency recalled that the Responsible Verification Program (PVR) is mandatory for vehicles that circulate permanently (including those with license plates from other states) in the municipalities that comprise the Metropolitan Area of ​​Guadalajara (AMG) and medium-sized cities such as Ocotlán, Tepatitlán de Morelos and Puerto Vallarta, and is applied according to the official calendar and license plates.

One of the conditions to start fining is that at least 80 verification lines are registered. However, although there are currently around 60 in 12 centers, Semadet affirmed that they have the capacity to serve the vehicle registry that is obliged to verify by license plate number, since 4,176 tests can be carried out daily.

The 80 lines are expected to be ready by December 31.

Another condition was the proper functioning of the page for appointments and payment. After the adjustments, the Secretariat assured that today the platform is in conditions so that the user can check the availability of spaces through a traffic light calendar.

To do this, it is necessary to verify within the corresponding calendar (month-plate) and it is recommended that the appointment be scheduled in time.

“The main objective of this program is to help improve the quality of the air we breathe. It is essential that there is co-responsibility between society and government to guarantee the human right to a healthy environment, and that those who have a motor vehicle are empathic with those who do not have that privilege, “said Semadet.

Proceeds will go to the environmental fund

It is expected that by the end of the fiscal year, 110 million pesos will have been obtained from verifications, that will be used in an environmental fund.

Of the total, 20 million pesos will be to strengthen the Air Quality Monitoring system that needs to be renewed.

Another 42 will be allocated to the application of a renewal and scrapping program, in search of those people who have vehicles of very delayed models, that “no matter how much they fix them” they do not manage to pass the verification, can access a resource that allow you to exchange your vehicles for a newer one.

Three million more will be injected into environmental conservation, while the remaining 45 million will go to a water resilience program for the sanitation of the Lagos de Moreno river and in Capilla de Guadalupe, in Tepatitlán. 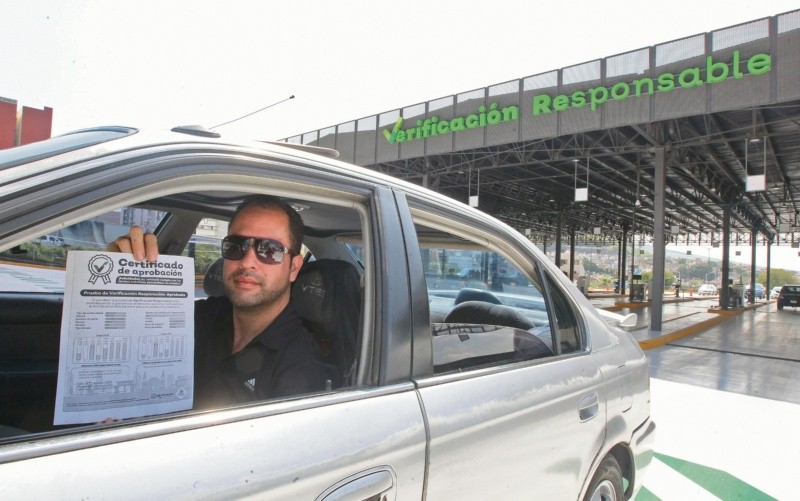 Rafael Durán complied with the obligation and had his 1997 model car checked. https://www.paudal.com//A. camacho

Although there is a myth that old cars do not pass inspection, the reality is that they have different emission limits that are considered acceptable, unlike late model vehicles.

An example is Rafael Durán’s 1997 Honda Civic, which was verified at the Vehicle Verification Center 0010, located on Cristóbal Colón Avenue, in Balcones de Santa María.

After having passed the test, the motorist shared: “If you bring it in good condition, you have no problems. There’s my decal. You just have to make their tunings in a timely manner”.

Blanca Gómez, who also went to check her car, stressed that with this type of program the environment is taken care of: “We have to be careful with our cars, it is not long and it is practical.”

Johan Ulises agreed that the process was fast and effective, but also that it helps to not pollute so much.

“It took about 20 minutes to do the verification. I recommend that you arrive on time for your appointment and with that they do not take you long, ”he added.

Myths and facts of verification

Cost. Although it is said that vehicle verification in Jalisco is one of the most expensive in Mexico, the reality is that the price is below that applied in CDMX and other states. In the rest of the Entities it is paid twice a year, which exceeds the cost in Jalisco.

Chance. By failing verification on the first try, a second chance is offered at no cost. In case of not approving the second time, you have one year to make the necessary repairs.

Old. Older cars have different emission limits that are considered acceptable as opposed to newer cars which have stricter limits.

Online Dating: To schedule an appointment, citizens must enter the website verificacionresponsable.jalisco.gob.mxfollow the steps indicated to carry it out (all the information requested is on the circulation card) and proceed to payment.

Arrive on time: When attending the test, it is requested to arrive on time and to attend only one person per vehicle, in addition to adhering to the safety and health protocols that exist in all Verification Centers to prevent accidents, as well as infections due to the COVID-19 virus. .

Recommendations: It is suggested that before taking the vehicle to check, it is given quality physical-mechanical maintenance in your preferred auto shop; the tires must be in good condition, there must be no fluid leaks, the engine must be clean and the vehicle must not have missing parts such as gas, oil or antifreeze caps, oil dipstick, etc. In addition, for health reasons, it is recommended that the vehicle in general be clean and that personal objects are not left inside, since during the test the user will not be able to approach the unit. 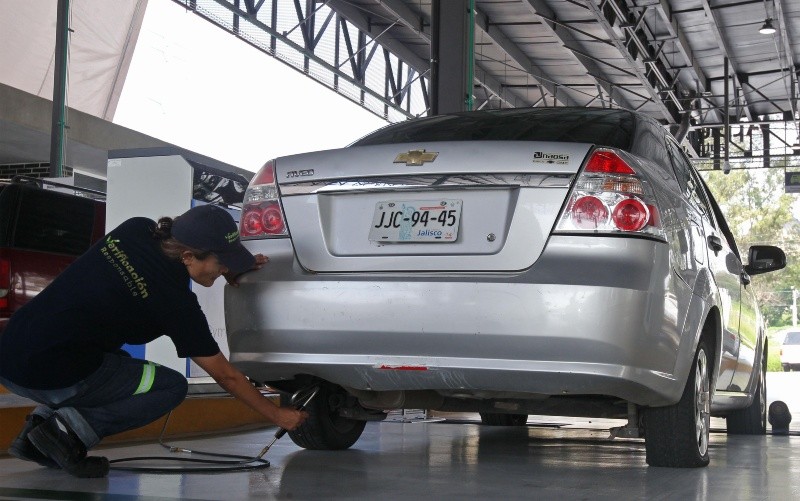 It is expected that by December 31 of this year, 80 verification lines will be ready. THE INFORMER. camacho

Fines for not verifying

How much does vehicle verification cost?

Responsible Verification: 500 pesos on the date established in the calendar.
Extemporaneous verification: 550 pesos outside the corresponding period.

Atmospheric contingencies are reduced in the city

However, it was in 2020, the year in which the health emergency due to COVID-19 began in Mexico, when the Government of Jalisco registered the lowest number: 18 atmospheric contingencies and pre-contingencies.

Have you checked your car yet?