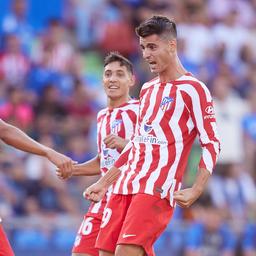 Atlético Madrid started the season on Monday with a convincing victory. The team of coach Diego Simeone won 0-3 on a visit to Getafe.

Álvaro Morata put Atlético Madrid on the right track with a visit to Getafe. The Spaniard has been loaned to Juventus for the last two years and is linked with a departure, but he immediately showed his value. Morata opened the score after fifteen minutes after a combination with João Félix.

Half an hour before the end, Morata again signed on a pass from Félix for the 0-2, after which substitute Antoine Griezmann took care of the third goal and the final chord fifteen minutes before time.

With the convincing victory, Atlético start the season without defeat for the thirteenth time in a row. The Madrid club, which became national champion for the last time in the 2020/2021 season, finished in third place last season, fifteen points behind national champions Real Madrid.

With the victory, Atlético follows the example of fellow townsman Real Madrid, which started the season in La Liga on Sunday evening with a 1-2 win over Almeria. FC Barcelona in the first game direct loss of points (0-0 against Rayo Vallecano).