They murdered Alejandra Zárate, head of pathology at the Spanish Hospital in the Miguel Hidalgo mayor’s office 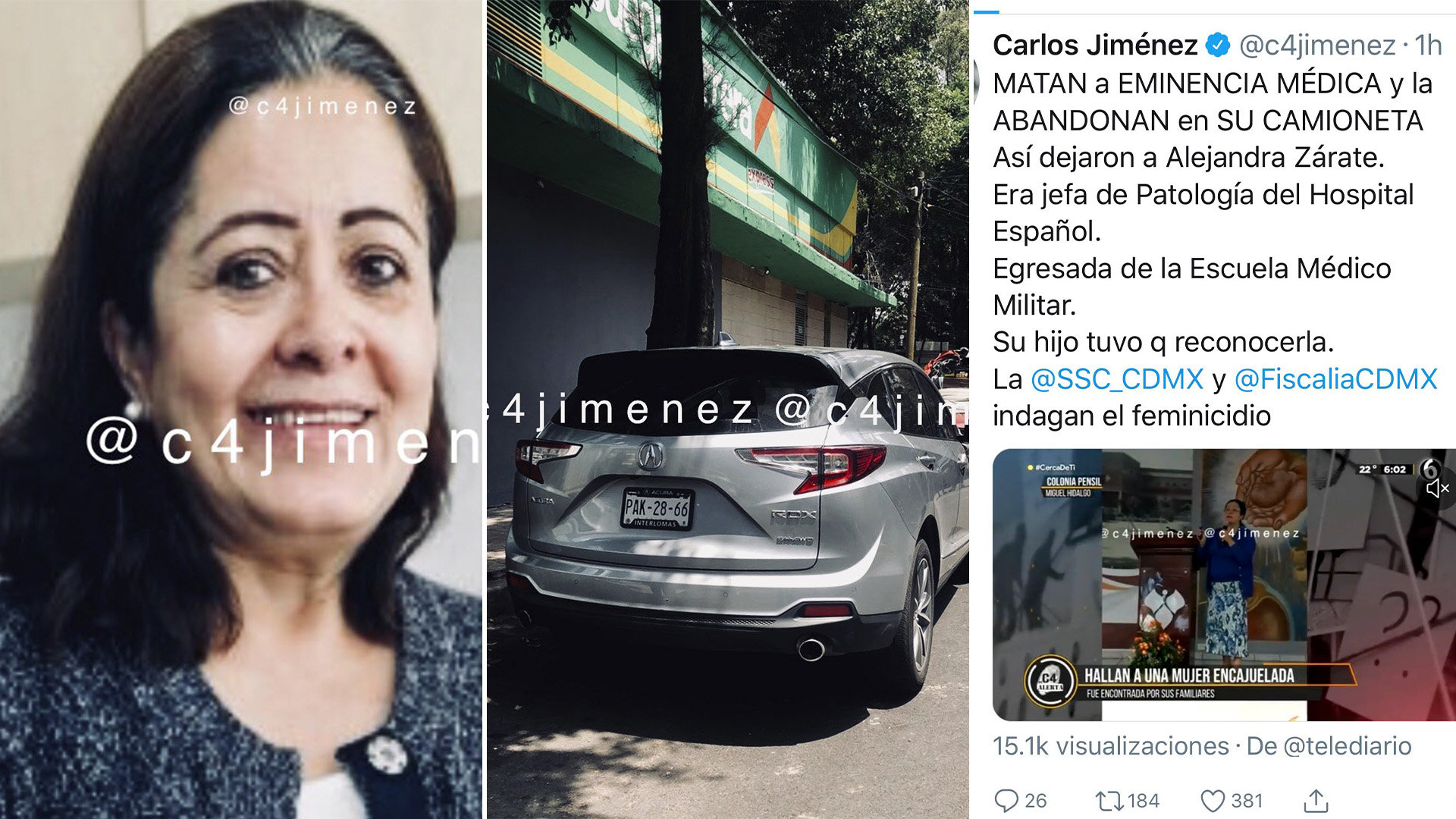 Last Saturday, August 13, it was reported that the head of the pathology area of ​​the Spanish Hospital, Alejandra Zárate Osorno, was found dead in the trunk of her truck after being murdered in the Pensil neighborhood of the Miguel Hidalgo mayor’s office in Mexico City. . The specialist owned a medical laboratory.

The fact was reported by the journalist Carlos Jiménez who through his Twitter gave the information of the femicide. The 63-year-old doctor, graduated from the Military Medical School with a specialty in anatomy, was killed by presumably strangulation, her body had to be recognized by her son, this was around 12:00.

According to the first investigations, the Doctor left the place where she worked the night before, the vehicle was abandoned at midnight, the Mexico City Prosecutor’s Office is investigating the femicide. The fact was cause for indignation on the part of the citizens, who did not take long to demand justice in the face of such an act. 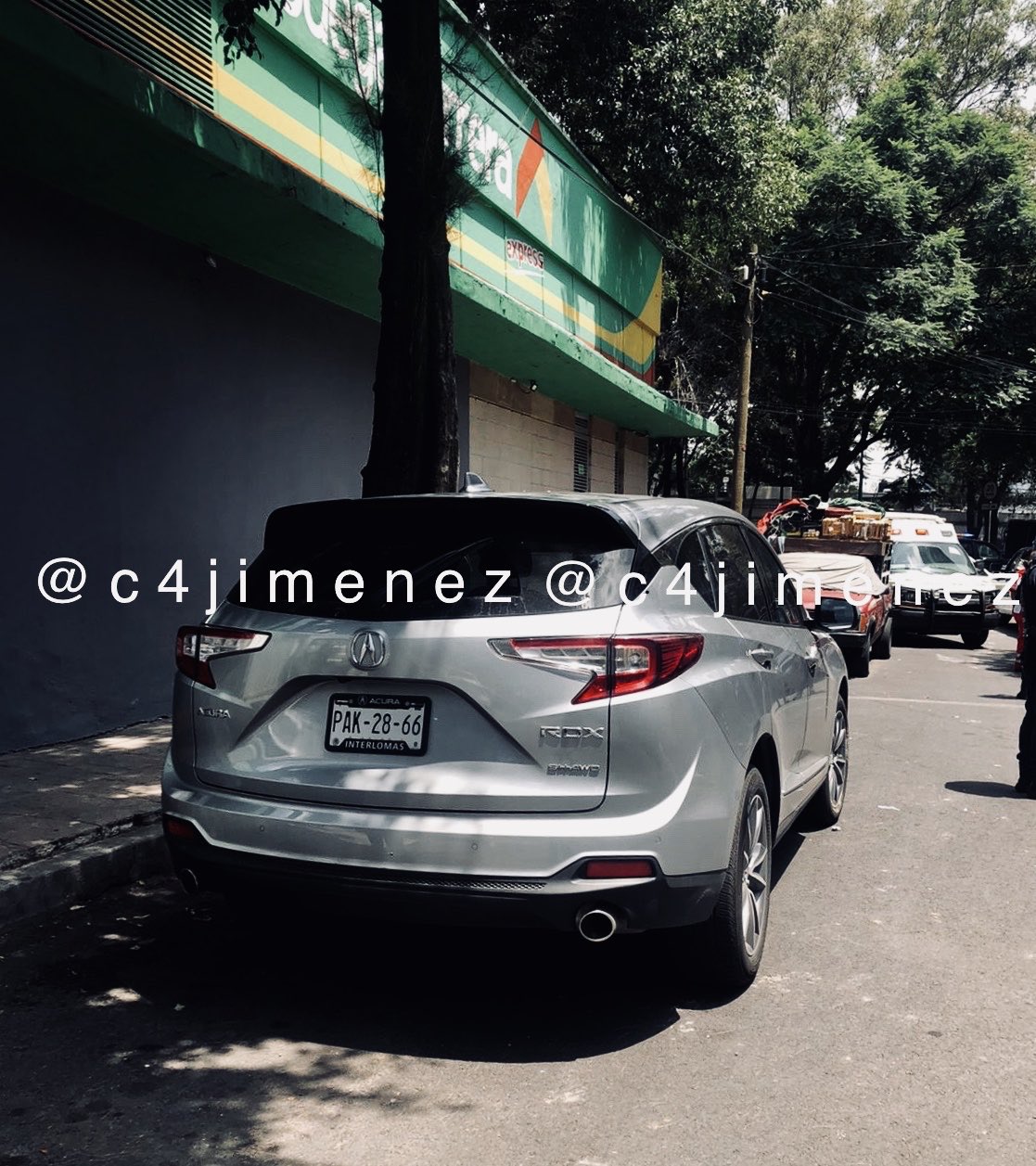 The doctor was abandoned in her truck (Photo: Twitter/@c4jimenez)

“The Spanish Hospital regrets the irreparable loss of Dr. Alejandra Zárate Osorno. We sympathize with her family, friends and collaborators at this painful time. Rest in peace”, wrote the official Twitter account of the Spanish Hospital.

In the statement you can read: “The College and Association of Pathologists AC, regrets and condemns the death of our colleague, friend and companion, Dr. Alejandra Zárate Osorno, according to the facts reported on August 12 of this year in Mexico City”. 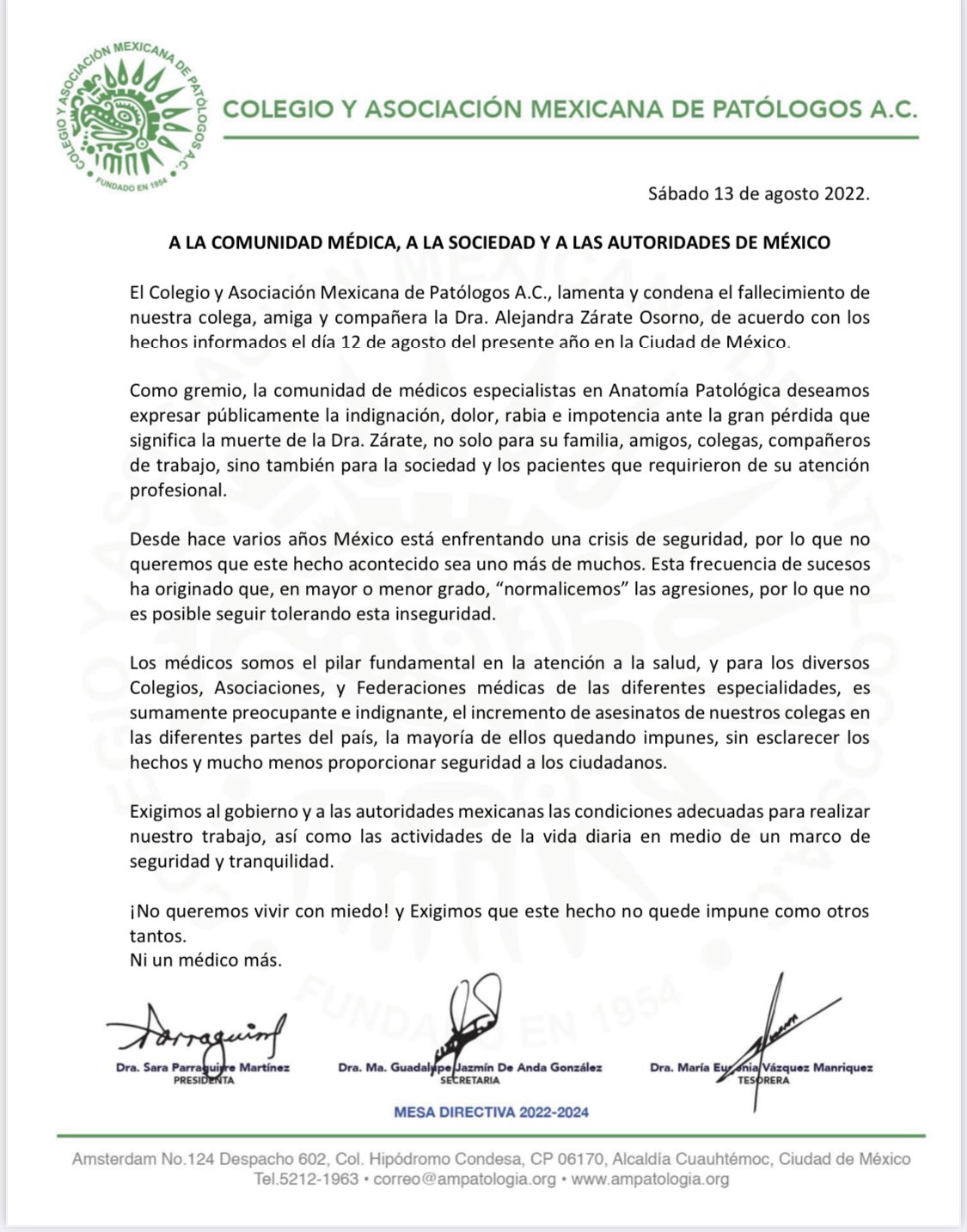 Likewise, it was indicated that the community of medical specialists wishes to publicly express “the indignation, pain, rage and impotence in the face of the great loss that the death of Dr. Zárate means, not only for her family, friends, colleagues, co-workers, but also for society and the patients who required his professional care.

On the other hand, they pointed out the security crisis that has been seen in Mexico, for which they asked the authorities that this event be one of them. “This frequency of events has caused that, to a greater or lesser degree, we ‘normalize’ the attacks, so it is not possible to continue tolerating this insecurity,” he said.

They also reaffirmed that doctors are the fundamental pillar in health care and the increase in murders of colleagues in different parts of the country is extremely worrying and outrageous. They also pointed out that most cases go unpunished without clarifying the facts, much less providing security to citizens.

KILL EMINENCE MEDICAL and LEAVE her in HER TRUCK
This is how they left Alejandra Zárate.
She was head of Pathology at the Spanish Hospital.
Graduated from the Military Medical School.
Her son had to recognize her.
The @SSC_CDMX y @FiscaliaCDMX they investigate the femicide pic.twitter.com/3FuadLsO3U

Finally, it was written: “We demand from the Mexican government and authorities adequate conditions to carry out our work, as well as the activities of daily life in the midst of a framework of security and tranquility. We don’t want to live in fear! and we demand that this fact not go unpunished like so many others. Not another doctor.”

In that sense a petition was created to demand justice For Dr. Alejandra, the goal is 7,500 signatures, so far more than 6,000 have been collected. This was launched by Raquel Valencia Cedillo.

Party in Iztapalapa ended with a fight, shooting and three deaths in a parking lot They gave preventive detention to a man who ran over four police officers in Tlalpan, CDMX Cofepris closed irregular clinics of the “surgeon to the stars” in CDMX and Edomex