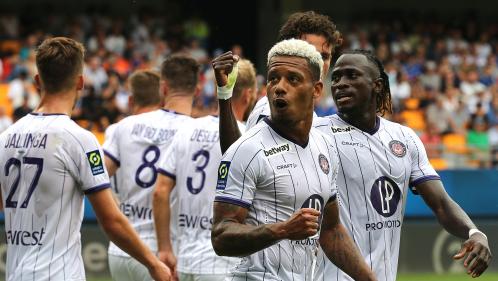 The day after PSG’s resounding victory over Montpellier (5-2), the second day of Ligue 1 continues on the lawns. While the 1 p.m. meeting between Lorient and Lyon was postponed because of the poor condition of the Moustoir lawn, the multiplex offered entertainment. Toulouse and Clermont won two great victories against Troyes (3-0) and Reims (4-2), Lens came up against the Ajaccio defense (0-0), and Auxerre took their first point thanks to the outcome of a frustrating draw against Angers (2-2). Back to the highlights of the afternoon.

Performance: the promoted Toulouse and Ajaccio in the game

Toulouse continues to impress. A week after their convincing draw against Nice, Téfécé signed their first success of the season on the lawn of Troyes (3-0). Put into orbit by an own goal from Troyen Yasser Larouci, the Hauts-Garonnais played their football to add two other achievements and win with authority. With four points on the clock, they temporarily climb to third place.

First trip, first clean sheet… but above all first victory of the season!

After its inaugural defeat in Lyon, Ajaccio showed another face to hang Lens at the François-Coty stadium (0-0). Well in place defensively, the Corsicans stifled the attacks of the Northerners. An encouraging result for the Ajacciens, for the moment stuck in the second part of the table (15th).

The match: Auxerre misses the mark

Auxerre came very close to their first victory. After leading 2-0, the Burgundians conceded a frustrating draw against Angers (2-2). In front of their audience at Abbé-Deschamps, Jean-Marc Furlan’s men thought they had done the hardest part with two goals in ten minutes at the start of the game. But they paid for the exclusion of Lassine Sinayoko on the hour mark.

At ten against eleven, they held out for a long time, and even had the luxury of scoring a third goal, which was refused for a foul at the start of the action. The Auxerrois ended up cracking, Angers equalizing a quarter of an hour from the final whistle. The Burgundians console themselves all the same with their first point of the season. They are 17th, six ranks behind their opponent of the day. For the Angevins, this is the second draw in a row, after a 0-0 against Nantes on the first day.

The comeback: led at the break, Clermont overthrows Reims

Clermont has heart. First dominated by opportunistic Rémois, two goals behind at half-time, the Auvergnats found a second wind to offer themselves a stunning victory (4-2) in 45 minutes. Komnen Andric scored twice to revive his team, before Muhammed-Cham Saracevic and Jérémie Bela went there with their achievement, against Rémois in distress. Thanks to this victory, their first this season, the Clermontois go back to 10th place.

For the Rémois, everything changed in a few minutes after returning from the locker room. They found themselves at ten after the exclusion of Emmanuel Agbadou, before conceding a penalty three minutes later on a hand in the box. Beaten by Marseille in their first match, Reims fell to last place in the standings with 0 points.