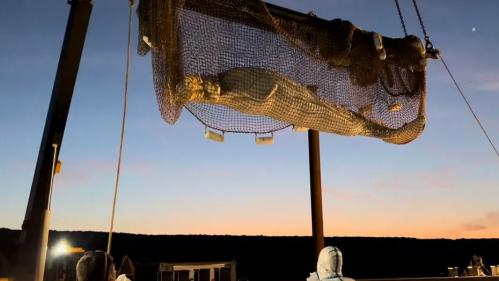 Call it “Lily”, this is the posthumous name that was chosen for the beluga trapped in the Seine. The militant NGO Sea Shepherd engaged in the rescue mission with the authorities wants to continue to make an impression on the reality of the oceans.

Thus the NGO Sea Shepherd had already pre-chosen the name. It is an organized baptism that took place on social networks this Saturday, August 13. A communication orchestrated by Sea Sheperd who masters the tool perfectly: the story of the beluga should not stop when it dies. The popular enthusiasm must not go down again. For the association, it is a way to continue to mobilize on the great animal cause and the state of the oceans in 2022.

We therefore chose the posthumous name Lys to make him the ambassador of a strong cause. “It means light in Norwegian, a country where the beluga sometimes ventures. Because this beluga challenges us and enlightens us on the fate of the ocean.” Sea Shepherd wants to link our destiny to that of the peoples of the seas.

Internet users therefore said yes and thousands of votes were recorded on the NGO’s Twitter page:

And 21,283 votes chose Lys, 826 voted against. The Orc who died in the Seine a few weeks earlier had suffered the same fate, so we learn that he is now called Sedna.

“May they inspire a change in our society, our consumption patterns to protect the marine ecosystem and guarantee the survival of their populations”, wishes the NGO.

That they inspire a change in our society, our consumption patterns to protect the marine ecosystem and guarantee the survival of their populations

On social networks, children have drawn their memory of the Beluga whose story has been looped on all television channels:

The story will not end there. Sea Shepperd is preparing a video to answer all the questions and critics about this animal rescue that ended badly: did they wait too long? should a net be used? Shouldn’t he be left to fend for himself? The association promises educational answers…while another story has already invaded his newsfeed : that of a walrus, named Freya, killed in Oslo when he had been, for some time, the star of the port by letting himself be photographed during his long naps on the boats.