Werner scores on return for Leipzig, Leverkusen down again | NOW 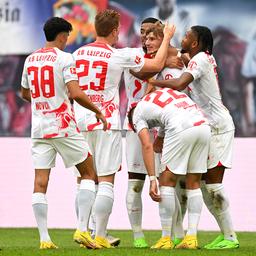 Timo Werner graced his return for RB Leipzig in the Bundesliga with a goal on Saturday. The attacker opened the score in the home game against 1. FC Köln: 2-2. Bayer Leverkusen suffered another defeat.

Werner gave Leipzig the lead nine minutes before half-time. Köln goalkeeper Marvin Schwäbe misjudged a shot from the striker. Werner was brought back by Leipzig for 20 million euros, after he made the switch to Chelsea two years ago for 55 million euros.

In the ninth minute, Dani Olmo also scored for Leipzig, but Dani Olmo’s goal was rejected after intervention by the VAR due to hands. Köln, where Kingsley Ehizibue had a starting spot, was tied five minutes before half time via Florian Dietz.

On the stroke of half-time, Leipzig had to continue with ten men through a red card for Dominik Szoboszlai. Nevertheless, Christopher Nkunku gave the home side the lead again early in the second half. Just under twenty minutes before the end, Köln came alongside again thanks to an own goal by Josko Gvardiol.

Bayer Leverkusen also lost at home to FC Augsburg after last week’s defeat at Borussia Dortmund (1-0). Former FC Twente midfielder opened the score for the visitors after fifteen minutes. Charles Aranguiz signed for the equalizer shortly before half-time, after which André Hahn Augsburg gave the win in the final phase.

Mitchel Bakker and Jeremie Frimpong both had a starting place at Leverkusen. Daley Sinkgraven stayed on the bench with the visitors and Timothy Fosu-Mensah was absent due to an injury. Jeffrey Gouweleeuw completed the ninety minutes at Augsburg.