It was the first days of 1974. Just four months earlier, Juan Domingo Perón had been elected president, in a plebiscite with more than 62 percent of the votes. Despite this, the guerrillas did not cease their attacks and on January 19 the People’s Revolutionary Army (ERP) carried out one of its most audacious coups: the attack on the Azul regiment, in whose barracks two units were based, the Armored Artillery Group 1 and the Armored Cavalry Regiment of Shooters 10 “Húsares de Pueyrredón”.

Around 8:00 p.m., the guerrillas took a house near the barracks to carry out the previous concentration and then, minutes before midnight, between 80 and 100 members of the Trotskyist group began the attack. This was facilitated by a soldier, something recurrent in these violent episodes that occurred in the 1970s. “We had information about the barracks through a soldier who was doing military service there,” recalled Enrique Gorriarán Merlo, who commanded the cupping attempt. 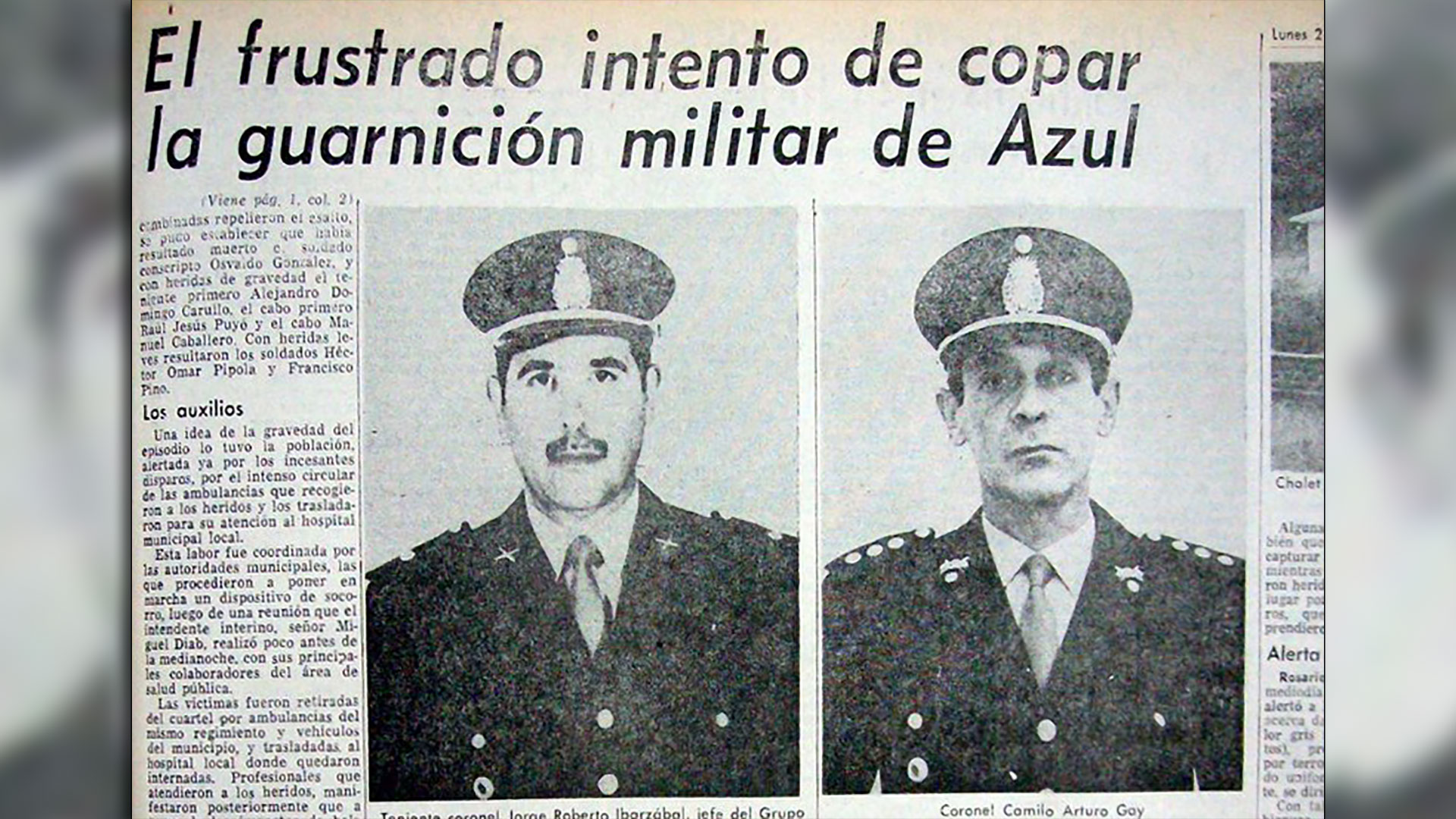 The guerrillas kidnapped Colonel Ibarzábal and assassinated Camilo Gay, head of the regiment.

The objectives of the armed action were to steal weapons for the future rural guerrilla that the ERP would install in Tucumán and to pose an open challenge to the Armed Forces and the constitutional president, none other than Perón, whom the majority of the people had trusted to order a country mired in political and economic chaos.

The attack failed and caused a breakdown in public opinion and in the vision that some people had of the insurgent groups, whom they viewed with some sympathy, especially in times of dictatorship. The episode showed the true face of the guerrilla, who assassinated the head of the barracks, Camilo Gay, and his wife, Hilda Irma Caseaux, and kidnapped Colonel Jorge Ibarzábal, whom he shot to death 10 months later, when the erpians who were transporting him from one “people’s prison” to another they were surrounded in a police clamp. 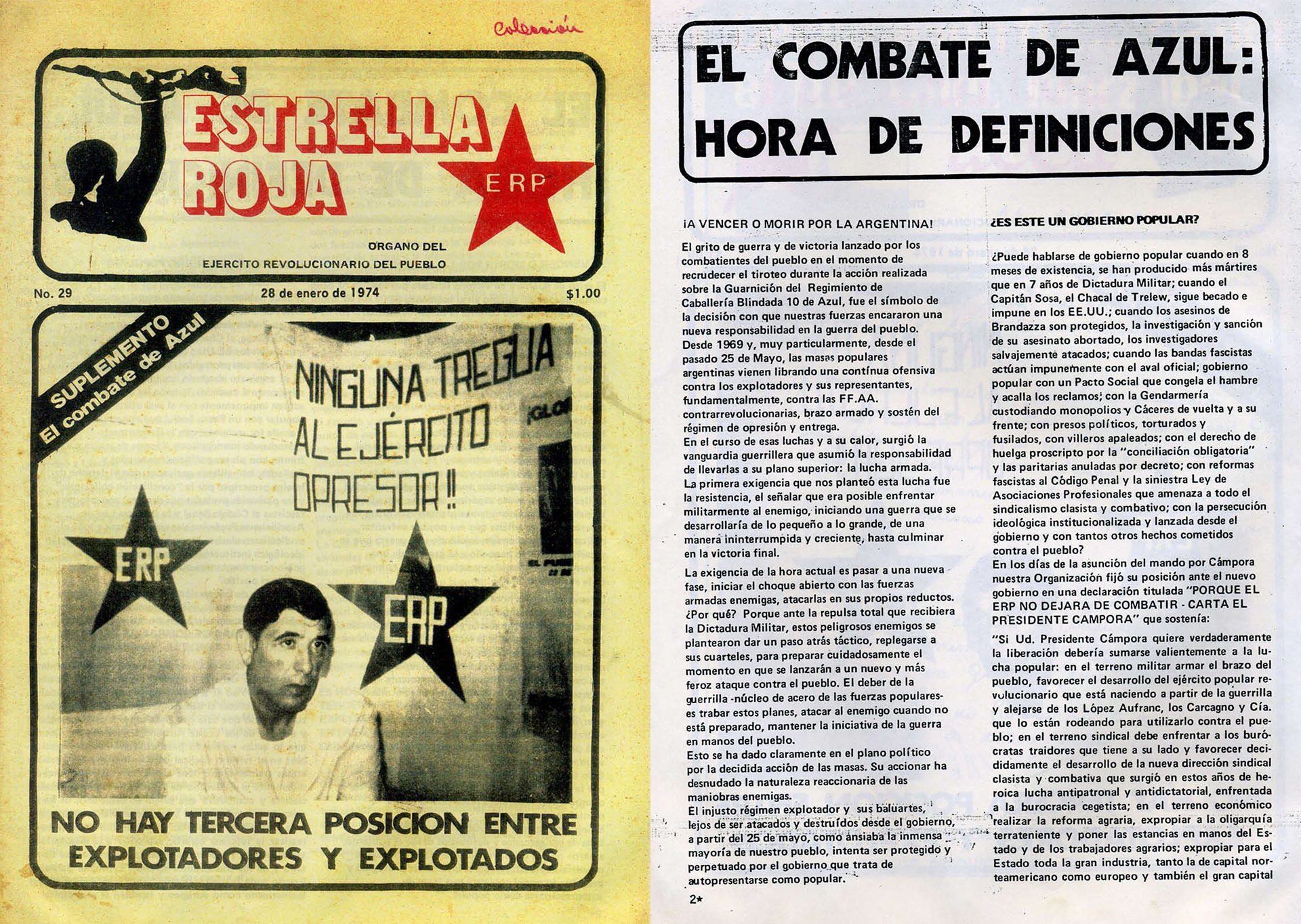 Red Star, the ERP dissemination body. In the photo, Colonel Ibarzábal, kidnapped in a “people’s jail.” He was assassinated 10 months later

Perón assimilated the thrust, which he felt was a true challenge to his authority, from that action he hardened his public expressions to condemn terrorism and accelerated the approval of a bill to modify the Penal Code, with harsher penalties for those who undermine the institutions. 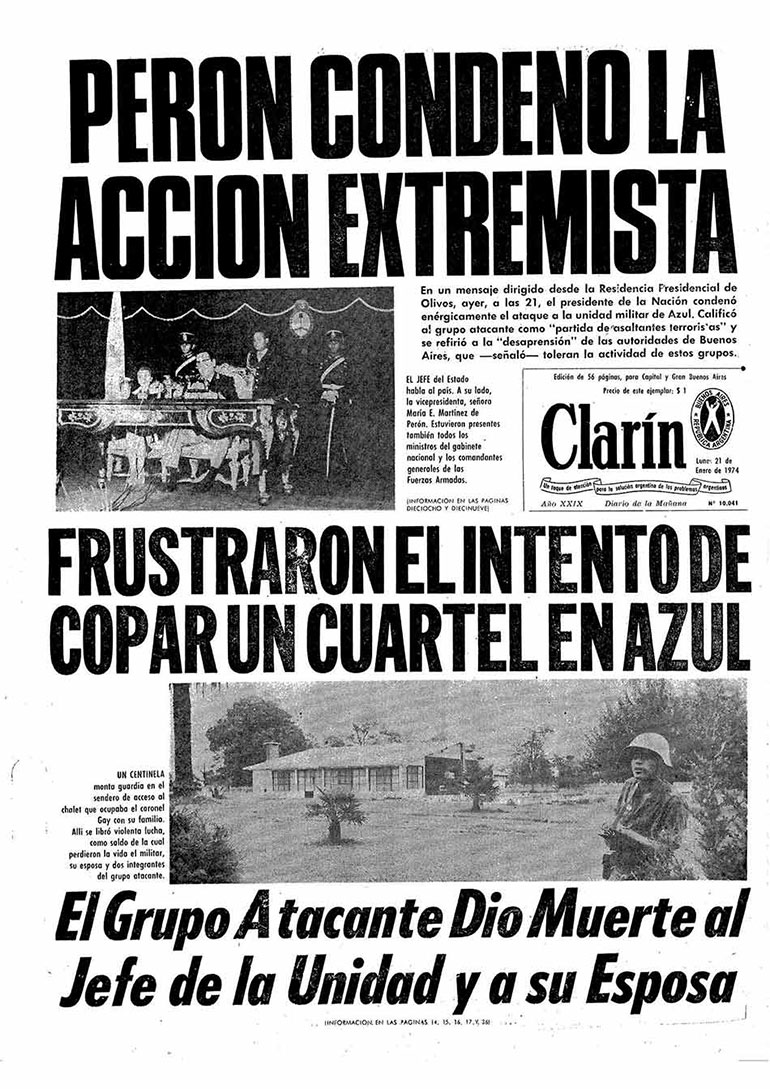 In addition, the Azul episode accelerated Perón’s break with Montoneros, who on September 25, 1973, just two days after the elections that consecrated the Justicialist leader as president, José Ignacio Rucci, a bishop in his political army, was assassinated. Although the Peronist guerrillas were not involved in the attack on Azul, for Perón the limits between the insurgents who invoked his name and those who shared Trotskyism or Guevarism had already been erased. In fact, Perón considered that the attempted takeover of Azul took place in the province of Buenos Aires due to the “obvious misapprehension of his authorities.” A direct blow to Governor Oscar Bidegain, close to the Peronist Revolutionary Tendency, who had to leave his post. 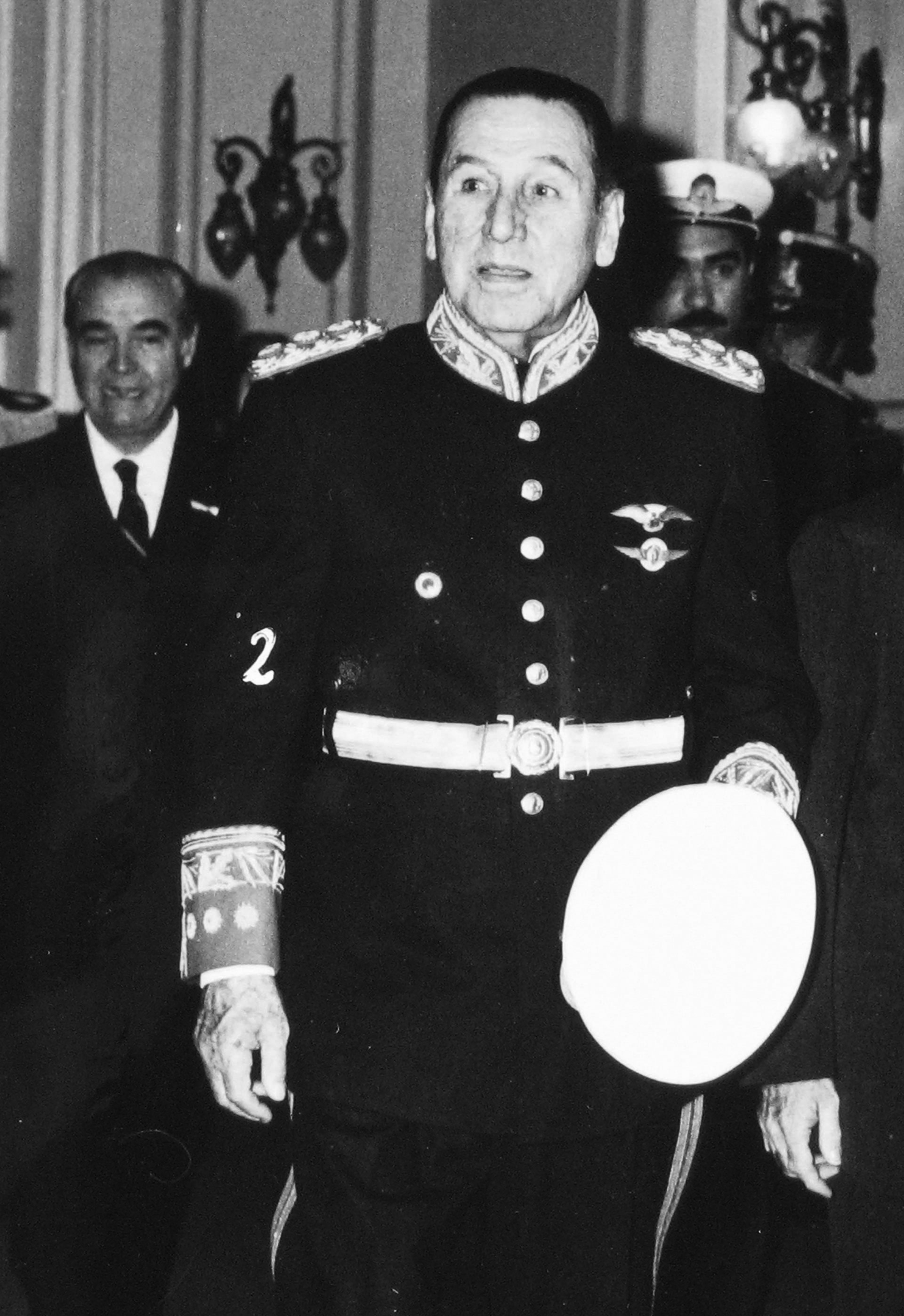 Perón, in uniform, during an official activity in his third presidency

“Annihilate this criminal terrorism as soon as possible”

On January 20, 1974, minutes after 9:00 p.m., Perón, wearing his lieutenant general uniform, delivered a harsh message on national television from the presidential residence in Olivos, condemning the attack on Azul.

The head of state was accompanied by the vice president, María Estela Martínez de Perón, the military aide-de-camp, Lieutenant Colonel Alfredo Díaz, and flanked by two soldiers from the Horse Grenadier Regiment. This scenery and the tone of the message left no room for speculation. Perón highlighted “the degree of danger and audacity of the terrorist groups”, described them as “enemies of the Homeland”, warned that patience had run out and called on “all the political forces and the People in general to take an active part in the defense of the Republic.

The speech that Perón gave on the national network

He charged, without naming him, against the Buenos Aires governor Bidegain: “It is not by chance that these actions occur in certain jurisdictions. There is no doubt that they obey an impunity in which lack of apprehension and incapacity make it possible, or, what would still be worse, if mediated, as suspected, guilty tolerance.

And in the final part of his speech he left a forceful phrase destined to be marked in history. It was when he called to “annihilate this criminal terrorism as soon as possible”, summoning all sectors to “the fight that gives rise”. Likewise, he warned that if the people did not accompany him in that challenge, he was willing to step aside. 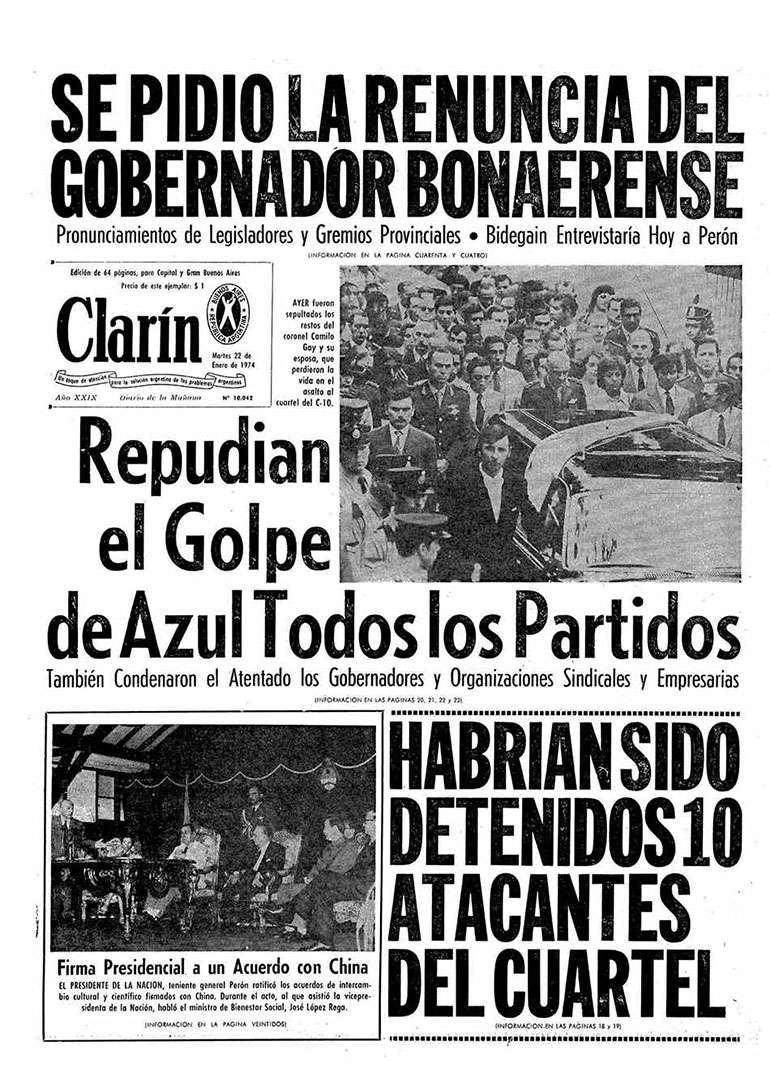 The departure of the deputies of the JP

The attack on Azul accelerated Perón’s break with Montoneros and an example of this was what happened with the national deputies who responded to the Peronist Youth. They opposed part of the reforms that the PJ government wanted to make in the Penal Code, modifications that aimed to more effectively punish terrorist actions. JP legislators believed that the new law was excessively repressive and that its scope was vague.

Seeking to avoid more rudeness, the deputies requested a meeting with Perón to clarify their differences, trying to get closer. On January 22, three days after the attack on Azul, the president received them in Olivos, but to his surprise, he did so with all the media and television cameras turned on, accompanied by the head of the Frejuli bloc, Ferdinando Pedrini, the Minister of the Interior, Benito Llambí, the Minister of Social Welfare, José López Rega, the Secretary General of the Presidency, Vicente Solano Lima, and the Press Secretary, Emilio Abras.

“Very well, gentlemen, you asked to speak with me. What is it about, I listen to you”, were the first words of a Perón with a face of few friends, before the incredulous look of the deputies of the Tendency, who tried to be conciliatory. In the round trip, Perón did not loosen, despite the fact that the legislators gave him a statement repudiating the acts of Azul. The President made it clear that the reform was necessary and issued several warnings, which went beyond the ERP and clearly reached Montoneros. Perón told them that the differences regarding the reform of the Code should have been clarified within the ruling bloc and he did not miss an opportunity to speak to them in harsh terms, in line with his speech on January 20.

“Our weakness will be what produces the country’s own misfortune, which is what we want to avoid,” he explained about the need for reform. And he added: “Unfortunately, we have to act within the law (…) and in order not to get out of it, we need the law to be strong enough to prevent these evils.” 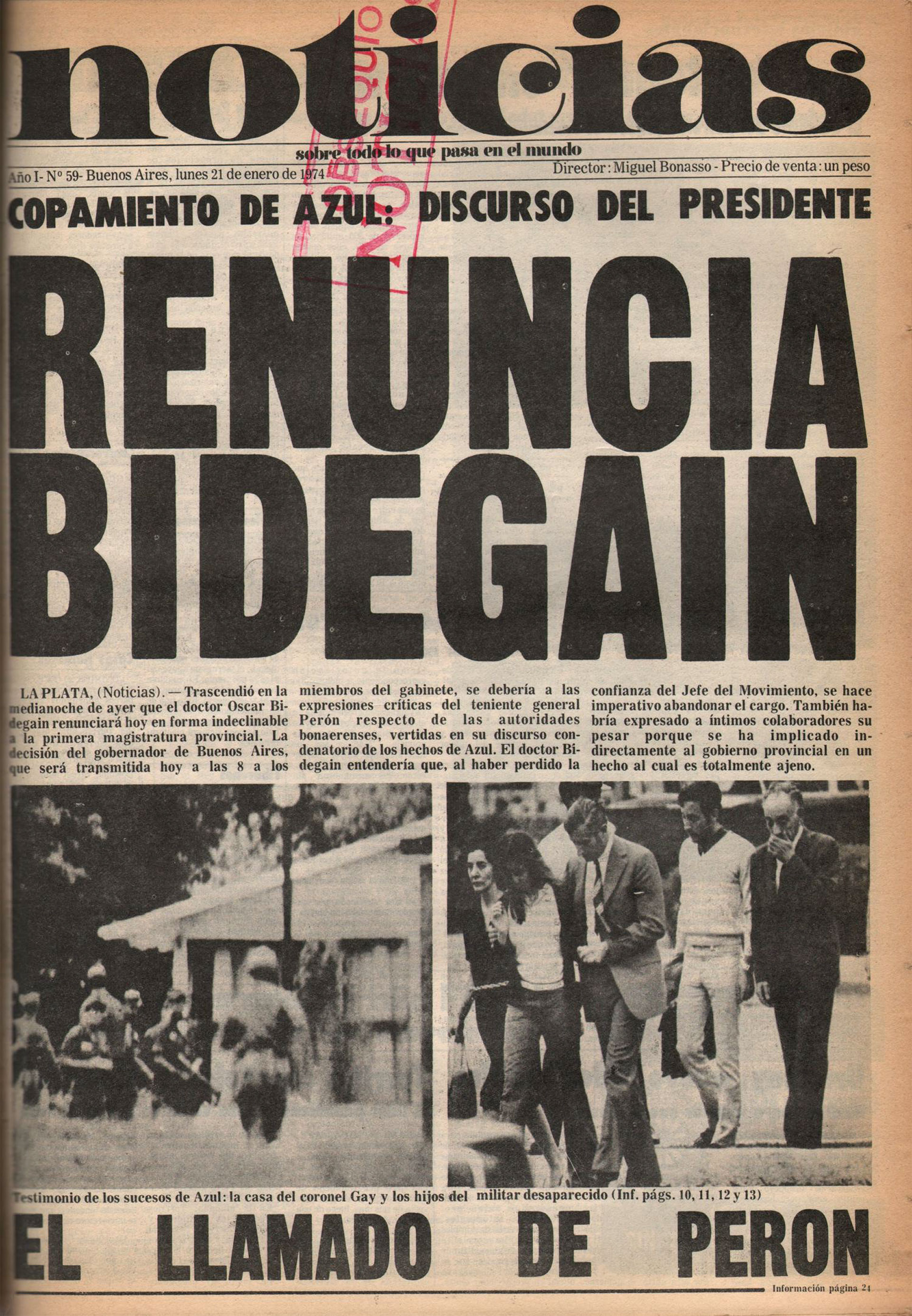 Noticias, the newspaper of the Montoneros, reports on the departure of Bidegain

But the most forceful part was when Perón warned them what could happen if the law to punish terrorist crimes was not sanctioned.

“Now, if we don’t take the law into account, all this will be over in a week, because I’ve formed a force, I’m going to look for you and kill you, which is what they do (…) If we don’t have the law, the path will be different, and I assure you that if we face violence with violence, we have more possible means to crush it, and we will do it at any price, because we are not here as puppets (…) If there is no law, out of the law we are also going to do it and we are going to do it violently,” he warned them.

And so there are no doubts that the references also alluded to Montoneros, he recalled Rucci’s crime: “And are we going to let ourselves be killed? we have law to repress them”.

The reform of the Penal Code was finally approved on January 25. After this, eight deputies of the Tendency resigned from their seats and shortly after the Superior Justicialista Council expelled them from the movement. The legislators were Diego Muñiz Barreto, Santiago Díaz Ortiz, Carlos Kunkel, Armando Croatto, Jorge Glellel, Aníbal Iturrieta, Rodolfo Vidaña and Rodolfo Vittar. 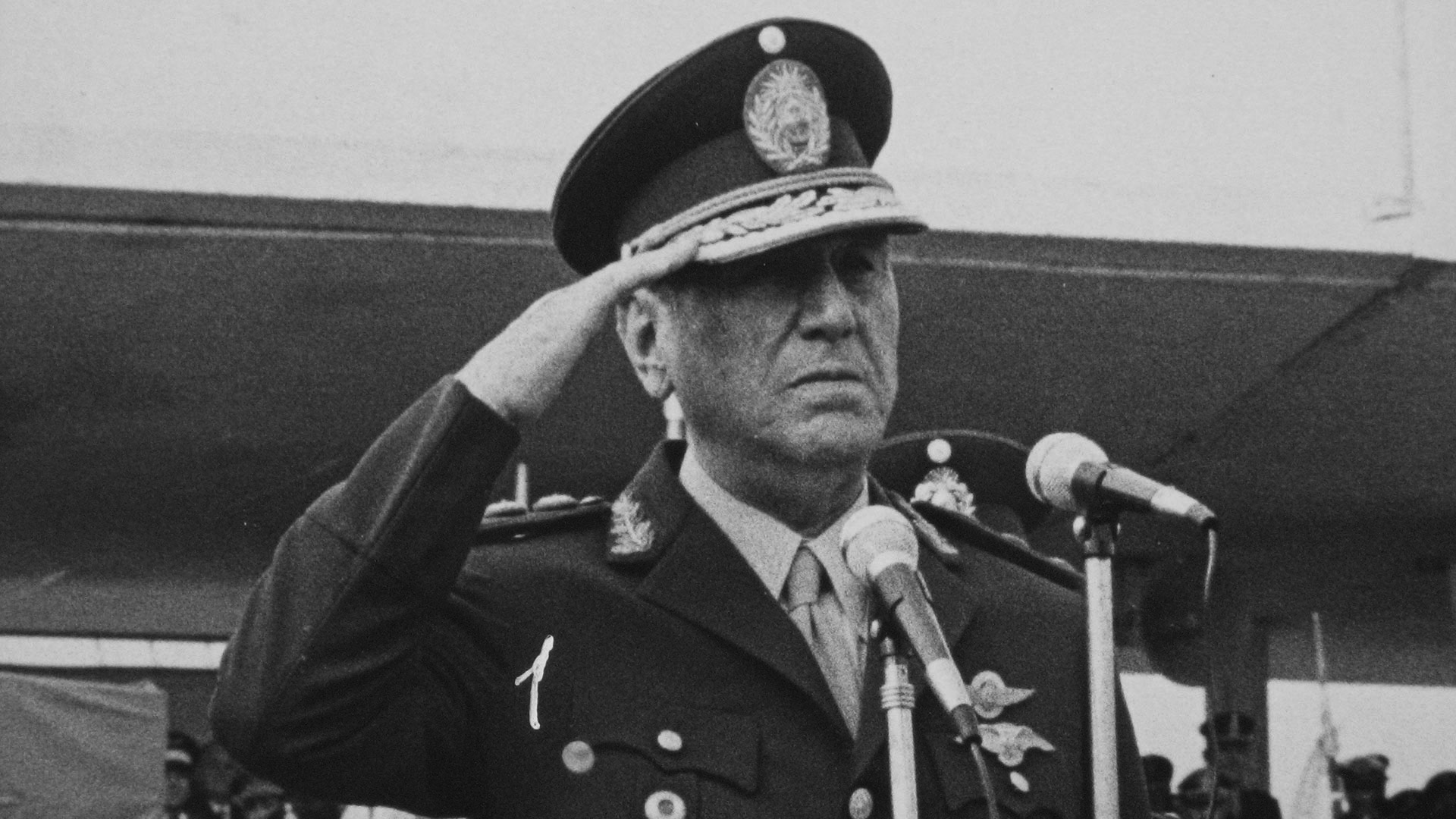 “Exterminate these psychopaths one by one”

On January 23, one day after the meeting with the deputies, Perón sent a letter to the “chiefs, officers, non-commissioned officers, and soldiers of the Blue Garrison,” in which he thanked them for “the heroic and loyal behavior” shown during the aggression suffered at the hands of the ERP.

In the letter, Perón assured the military that they were not alone in the fight against terrorism. “Know that you are not alone in this fight, but that it is all the people who are committed to exterminating this evil and it will be the actions of all that will prevent more attacks and kidnappings from occurring.”

Perón’s letter to the soldiers of Azul

But it was not all. In line with his speech on the national network and with the exhortations to the deputies of the JP, he used similar terminology to describe the actions of the guerrillas, whom he described as “psychopaths”, who had to be “exterminated one by one for the good of the Republic.

To complete the picture, on January 29 the newspapers reported that the appointments of commissioners Alberto Villar and Luis Margaride as deputy chief of the Federal Police and head of the Federal Security Superintendence, respectively, had been made official. Villar and Margaride had been two representative police chiefs in the dictatorships preceding the governments of Cámpora and Perón and were in retirement. Now, they were summoned directly by the PJ leader to return to active service to join the fight against subversion. Another sign that times had changed.