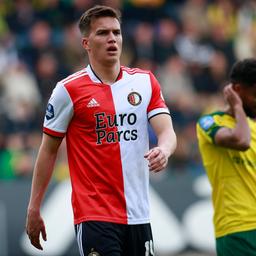 Cole Bassett is playing on a rental basis for Fortuna Sittard this season. The American midfielder comes over from Feyenoord, where he was not in the plans of trainer Arne Slot.

Officially Bassett is rented from Colorado Rapids, the club from which Feyenoord rented him for a year and a half at the beginning of this year. Due to his lack of perspective, he is now switching to Fortuna.

In the past six months, Bassett played eight times for Feyenoord, mainly as a substitute. He provided one assist. On Sunday, the 21-year-old midfielder came into the field just before time during the won away game against Vitesse.

Bassett has one cap on behalf of the United States to his name. He made his debut against Bosnia and Herzegovina in December last year and immediately scored the winning goal (1-0).

Bassett’s departure is part of the metamorphosis that Feyenoord is undergoing this summer. A total of thirteen players left – not all of them defining players – and ten came back before that. It probably won’t stop there.

A lot is happening at Fortuna too. Twelve players have been captured so far (including top striker Burak Yilmaz) and no fewer than twenty have been waved off.