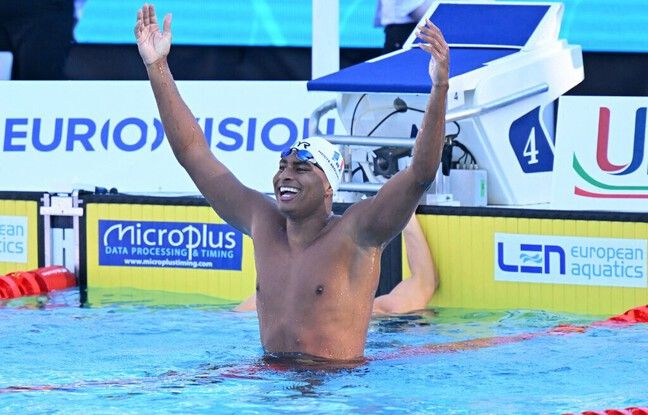 But what a day! A few minutes after the French triple in triathlon, and the great victory of Léo Bergère, it is the turn of the swimmers to shine during these European championships, in Rome. Yohann Ndoye Brouard became European swimming champion, in the 200m backstroke, beating his French record with a time of 1 min 55 sec 62 in the final.

“It’s the first Marseillaise for me, so it’s weird. I have the impression that the Italians like me. It’s a great story with a happy ending. There is no longer anything that can stop me…”, reacted the new European champion. “I felt that I was in front, and that the last 50 m are my strength, so I took advantage”, added the French swimmer, very happy to have “made proud” his family, present at the edge of the swimming pool. .

Qualified on time on Friday having swum alone in the semi-finals, following a plot problem at the start, Ndoye Brouard beat Hungarian Benedek Kovacs (1: 56.03) and Englishman Luke Greenbank (1: 56.15).

In the 100m freestyle, the young Romanian prodigy David Popovici improved the world record, winning in 46.86, 5 hundredths better than that held by the Brazilian Cesar Cielo since 2009.

“I’m super happy with my time, and it confirms my frustration (of the Worlds) in Budapest where I thought I could get a medal (over this distance)”, reacted Wattel, vice-world champion in the 100m. butterfly at the end of June in Hungary. “I have more speed than in Budapest, so we’ll see how it goes for the rest. I hope to get closer to Sjöström as often as possible (in the future), but I knew she was untouchable tonight,” added Wattel. Third place on the podium was taken by Dutch Maaike De Waard (25.62).