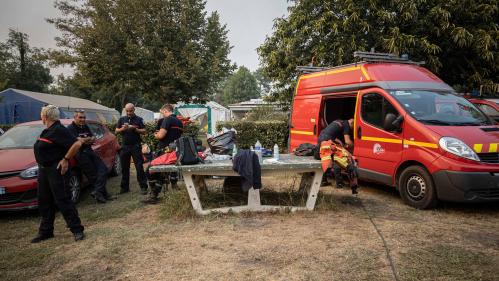 We count on them to save the day. Traveling to Aveyron on Wednesday August 10, Gérald Darmanin called on the employers of volunteer firefighters to release them from their responsibilities so that they can join the barracks. Faced with the resumption of fires in Gironde, the Minister of the Interior also announced a strengthening of resources, which now include “more than 1,000 firefighters, 9 planes and two water bomber helicopters”.

At the same time, the countries of the European Union have announced that they are providing assistance to France. A total of six planes, 383 men and 101 vehicles have been sent to support the 1,100 French firefighters fighting the fire. “Companies are largely ready to collaborate”, also reacted Wednesday on franceinfo Cécile Despons, president of the Confederation of small and medium-sized enterprises (CPME) of Gironde. Behind this strong mobilization in the face of an exceptional situation, however, the volunteer firefighters are going through a crisis of commitment and recruitment.

This is a situation that has alerted the profession for several years. “We are finding it increasingly difficult to recruit volunteers,” says Samuel Mathis, secretary general of the volunteer firefighters’ union. Firefighters were only 197,000 in 2020, against 204,000 in 2005, according to data from the Ministry of the Interior. They represent 78% of firefighters in France.

“We no longer have anyone to put in the gear”, confirms Thomas *, head of the barracks and representative of a union of volunteer firefighters from the Grand Est contacted by franceinfo, who is worried about an aging population. volunteer firefighters. The heads of centers also find it difficult to keep their volunteers over the long term. “The duration of engagement is much shorter,” says Samuel Mathis.

“We must promote the sustainability of the commitment. It is important that we have firefighters who we train and who stay.”

Samuel Mathis, General Secretary of the Union of Volunteer Firefighters

Thomas can no longer recruit at all to make up for the shortages. “I manage to maintain what is asked of me on night call, but to find people available during the day, it quickly becomes a problem”, he confides.

And if the number of volunteers has dropped, “the number of interventions has increased in recent years”, according to Samuel Mathis. “Without the volunteers, we could not carry out all our rescue missions”, affirms Céline Guilbert, commander of the departmental fire and rescue service (sdis) of Vienne, interviewed by France 3.

However, these volunteers often have a job elsewhere. “We are asked too much, believes Thomas. Ultimately, this creates an imbalance between professional life and family life”. For Pierre Sichi, president of the Mediterranean volunteer firefighters collective, “volunteering must remain volunteering, we must not forget that we have a job and a family on the side”.

“Before, we were asked for 6 to 8 hours of availability per month, today that is no longer enough,” he adds. A volunteer firefighter may be required to perform two to five shifts (at the barracks) and between two and ten on-call duty per month. In the latter case, “we are on beep at home and we must be ready to take off at any time”.

Several volunteer firefighters interviewed then point to a weariness with the lack of recognition by the hierarchies. “Despite our importance, we are never listened to, regrets Thomas. When we report problems to the departments, we have no response.”

Among the problems raised, the lack of training. Thomas says that two of his volunteer firefighters could not go to lend a hand in Gironde, because they had not followed the intervention training on forest fires. “These training courses take a lot of time for volunteer firefighters, and this adds additional pressure which can discourage some”, affirms the station chief, deploring a delay in these skills which have become essential. “There are far too many constraints which means that in the end, we no longer have anyone to put in the trucks!”

Several avenues have been put forward in recent years to overcome this commitment crisis. A loyalty and recognition service (PFR) allows, since 2005 and under conditions, to guarantee each volunteer firefighter who has completed at least 20 years of effective service, an additional annual pension paid after his cessation of activity, from the age of 55.

For Samuel Mathis, however, remuneration is not the heart of the problem. “We would like to manage volunteer firefighters like professional firefighters, but we have to make a difference.” For him, civil security in France, which relies heavily on volunteers, must be reviewed in depth: “We cannot trivialize the commitment of volunteer firefighters. We must at all costs find ways to improve their recruitment and their management”. For the firefighters interviewed, there is no doubt that volunteering will keep its place in the model of tomorrow, but it will have to be reformed.