Cairo, difficult godfather of the Palestinian enclave, for lack of other solution 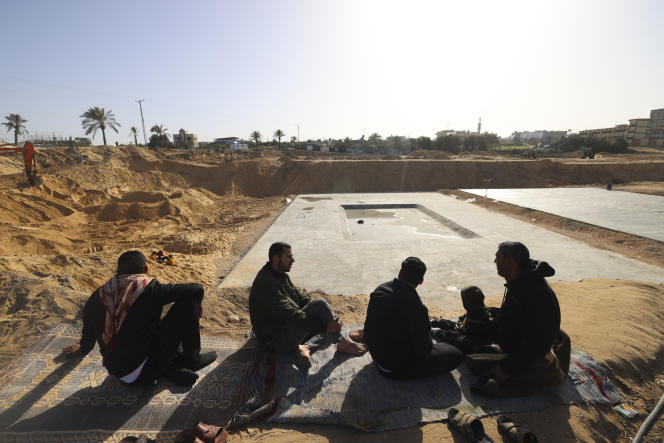 Workers take a break as Egyptian machinery works on the construction site of a new housing complex, north of Gaza City, on January 11, 2022. MOHAMMED ABED / AFP

When Israeli bombs and Palestinian rockets rip through the skies of Gaza, the eyes of the world are on Cairo. This weekend again, after Israel attacked the enclave on Friday August 5, in an operation against Islamic Jihad, the Egyptians were there, behind the scenes, conducting discussions “day and night to prevent the situation from becoming out of control” in the Palestinian enclave, said Egyptian President Abdel Fattah Al-Sissi. Their efforts paid off: Sunday evening, after just over two days of a violent confrontation that left 46 dead on the Palestinian side, the guns fell silent. All then congratulated the Egyptian godfather.

Read also: Article reserved for our subscribers The hell of Palestinian travelers at the gates of Gaza

A strong state in the region, linked geographically but also historically with the enclave it occupied between 1948 and 1967, Cairo is today the official mediator in Gaza: it is one of the few players, along with Qatar and occasionally the United Nations coordinator in the Holy Land, talking to everyone. With Israel, he signed a peace agreement and cooperates in the security field, such as in the management of the blockade of Gaza, in place since 2007. He reconnected with Hamas in 2017, after the election at the head of the movement in the enclave of Yahya Sinouar, a tough leader with little regard for the repression of his Muslim Brotherhood allies by the Egyptian military. He discusses with the other Palestinian factions. It is where Americans and Europeans have disappeared, refusing to cooperate with Hamas, classified as a terrorist organization. “Gaza serves Egypt in its relationship with the United States, which needs a concierge here,” notes Bassem Naïm, a senior Hamas official.

Egypt considers the Gaza issue as essential to its security. She has intervened several times in recent months to try to ease tensions between Israel and the Palestinian factions. Since the May 2021 war, Egyptian military intelligence officers have even taken up permanent quarters at the Al-Mashtal hotel on the seafront for the first time since the start of the Israeli blockade in 2007.

Read also: “Unlike Hamas, Islamic Jihad has no desire to exercise political power”

These men cultivate networks among the local notables, who flock to them. “Egypt has long considered Gaza an enemy, but Gaza cannot be reduced to a party [le Hamas] recalls Aakif Al-Masri, a figure close to Cairo among the traditional clan leaders. They supervise exchanges at the Rafah border post, which has been reopened since 2017. In recent months, they have finally allowed Qatar to pay part of the salaries of Hamas officials.

You have 53.63% of this article left to read. The following is for subscribers only.