War in Ukraine: counter-offensive, troop movements… Why the conflict could enter a new phase in the south of the country

Will the Southern War take place? In mid-July, the Ukrainian Defense Minister, Oleksiy Reznikov, had promised “a force of one million men” to reconquer the southern regions held by the Russian army. Nearly a month later, the front line has hardly changed and no major counter-offensive has taken place. The city of Kherson, occupied by the Russians since the first days of the war, holds a highly strategic place: it is the only large city (280,000 inhabitants before the war) held by Moscow west of the Dnieper river, a kind of natural border that cuts Ukraine in two.

For several days, the Ukrainian army has struck in particular the Antonovsky bridge, which connects Kherson to the east bank of the Dnieper, and whose importance is crucial for the supply of the Russian occupation troops. In order to isolate the city, the Ukraine also bombed a railway bridge, very close to the first, and a road bridge in the northeast of the city, above the Inhoulets river. 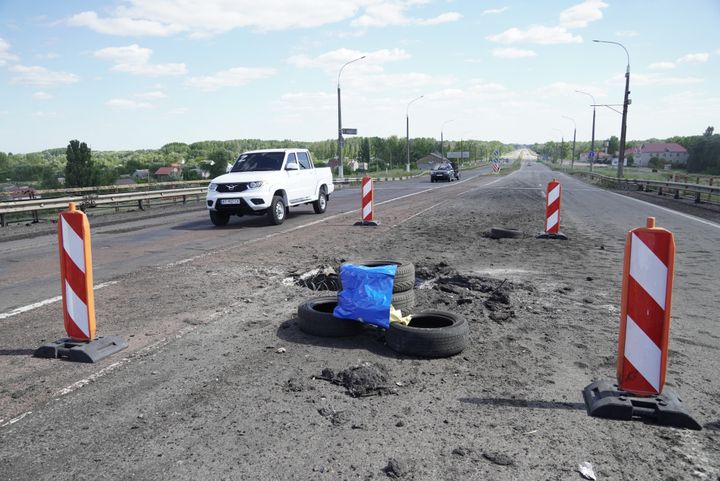 The Antonovsky Bridge, here on July 21, 2022, is targeted by Ukrainian strikes in order to cut off the city of Kherson, occupied by Russian forces, from its supply line. (STRINGER/AFP)

“Ukraine wants to seize the opportunity to isolate the Russian forces west of the Dnieper” to neutralize them, analyzes former general Dominique Trinquand for franceinfo. If successful, the Russian offensive would be driven back across the river with, as a result, a large number of prisoners and “disastrous psychological effects for the Russian forces”.

At the beginning of August, kyiv said it had taken over about fifty small localities, but for the most part located further north, on the border of the Dnipropetrovsk region. These Ukrainian reconquests owe much to the Western Himars rocket launchers, because they allow the destruction of enemy ammunition depots and the disruption of Russian logistics chains. “It is easier for the Ukrainians to try to reconquer territories in the South than in the Donbass, especially since the extension of Russian logistics lines is more important there”, estimates for franceinfo General Jérôme Pellistrandi, editor-in-chief of National Defense Review. 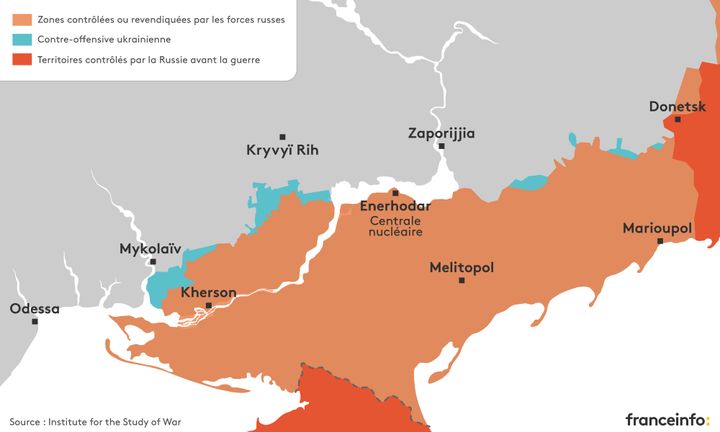 At this stage, however, a Ukrainian offensive in Kherson seems hypothetical. In one month, the front line has only shifted two short kilometers towards the city, despite repeated announcements from kyiv of the imminence of a massive assault to retake the regional capital. “The Ukrainians have not yet demonstrated their ability to gain the upper hand over the Russians” as part of a major counter-offensive, explains to franceinfo Olivier Kempf, director of the strategic synthesis firm La Vigie.

“This war has its own characteristics because of cyber, drones and satellite observation means. As soon as a mechanized army force concentrates in one place, the enemy knows it immediately”, comments Olivier Kempf. The balance of power of the artillery takes precedence. However, “he seems favorable to the Russians, whatever one may say. This explains the successive retreats of the Ukrainians” in the East. Moreover, adds Jérôme Pellistrandi, “the Ukrainian forces have been, until now, in a defensive position”, in Mariupol or Severodonetsk. This time, “they would have to reverse the balance of power” in terms of numbers.

Russian forces, for the time being, are trying to maintain their positions in the south. They seem to hold firmly “the entire pocket of Kherson, bordered to the north by the Inhoulets river and to the south by marshes and steppes”, continues Olivier Kempf, with also “a succession of trenches in the very north”. The Russian bombardments are gaining in intensity in the Mykolaiv sector, where the Ukrainian artillery is concentrated. Witness the recent death of Oleksiï Vadatoursky, owner of the main Ukrainian cereal logistics company, in a bombardment.

In order to put more pressure on Mykolaiv, 25,000 troops are currently being redeployed by Russia to southern Ukraine, according to British intelligence. quoted by The Times (article in English). “The war is about to enter a new phase”, warned on Twitter (in English) the British Ministry of Defence: “The heaviest fighting is moving towards a front line of about 350 km stretching between the Zaporizhia sector and Kherson, parallel to the Dnieper.” 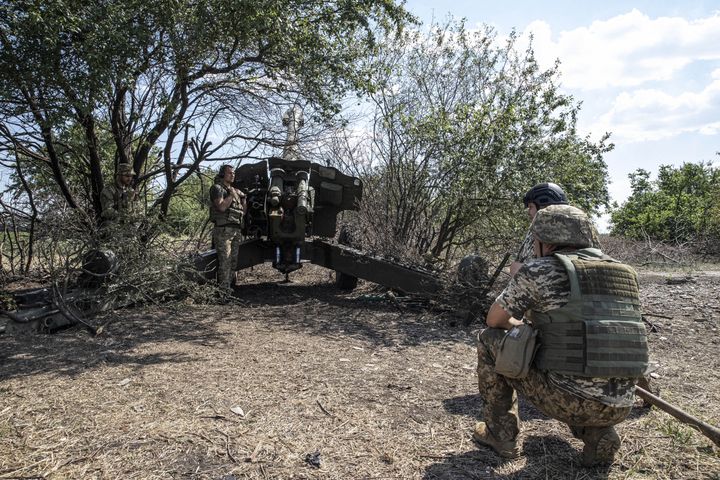 How to interpret these troop movements? “This shows the importance that the Russians attach to this Ukrainian counter-offensive”, analyzes Dominique Trinquand. “The maintenance of a bridgehead west of the Dnieper foreshadows the continuation of operations for the Russians, who want to continue their progress towards Odessa.” Western intelligence statements must be taken “with tweezers”, nuance for his part Olivier Kempf.

“After phase A, the attack on kyiv, and phase B, during which the Russians concentrated on the Luhansk salient [dans le Donbass]everyone is wondering about the next step.”

According to him, two hypotheses are on the table on the Russian side. The first: “To guard against a possible Ukrainian offensive”. The second: “Relaunch an action on the side of Kherson, to take Mykolaiv” or, at the very least, “push back the front line, so as to keep the Ukrainian long-distance artillery out of reach of Kherson”. Only the future will reveal Moscow’s intentions. In the meantime, the regional governor, Vitaliy Kim, rules out any evacuation of Mykolaiv and its 450,000 inhabitants. “If the Russians move forward, we will think about it,” he said.

The situation in the neighboring oblast also raises serious concerns. The administrative capital, Zaporijjia, is still in Ukrainian hands, but Russian forces have controlled the Enerhodar nuclear power plant on the south bank of the Dnieper since the start of the war. Since early August, Moscow and kyiv have accused each other of carrying out strikes near the site. 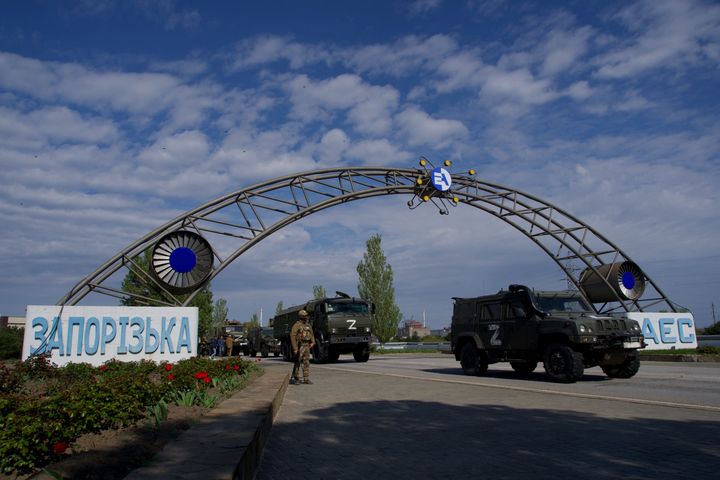 Russian military vehicles enter the site of the nuclear power plant located in Enerhodar, in Zaporizhia oblast (Ukraine), on May 1, 2022. (ANDREY BORODULIN / AFP)

Melitopol, further south, acts as the unofficial capital of the occupying forces. In early August, “most of the air defense of the occupiers was transferred from Melitopol to Kherson”, according to the legitimate Ukrainian mayor of the city, Ivan Fedorov, confirming the hypothesis of strategic redeployments. According l’Institute for the Study of War (in English), an American think-tank which produces daily summaries, the “Russian forces would continue to neglect the front line of the oblast of Zaporizhia, in favor of the efforts” in areas where the fighting is more intense.

The Russian military presence pushes kyiv to maintain pressure on Melitopol. In a message posted on August 8 on Telegram (link in Ukrainian), the mayor, Ivan Fedorov, affirms that the Ukrainian army has targeted several Russian positions on industrial sites. These strikes, carried out with American heavy artillery systems, he said, neutralized about a hundred soldiers and ammunition depots. Occupation regional representative Vladimir Rogov says for his part (in Russian) that the Russian anti-aircraft defense repelled the Ukrainian attack.

For the Ukrainian army, the countdown has already begun. Because in parallel, Moscow continues to prepare referendums of annexation for the regions of Kherson and Zaporijjia, in order to integrate these territories into the Russian Federation. These elections are scheduled for the fall (the occupation authorities of Kherson are campaigning for the date of September 11). They risk freezing territorial power relations for a long time. If these referendums are held and they approve annexation (which there is little doubt about, with Moscow fully controlling the polls), the Kremlin will consider these areas as fully Russian. Any attack could expose the Ukrainian army, at least in theory, to a nuclear response.

In Kherson and Zaporijjia, the occupation authorities are already multiplying “Russification” measures (currency, telephone operators, passports, etc.). “The Russians have an interest in annexing these territories very quickly to ratify this status. It will then be extremely difficult for the Ukrainians to reconquer them”, comments Dominique Trinquand.

>> War in Ukraine: how the Russian occupiers are trying to take control of the Zaporizhia region on the administrative front

In the meantime, resistance networks seem to be organizing in the South, unlike the Donbass. Several occupation leaders have already borne the brunt of attacks carried out by “partisans”. Latest: Vitaly Gura, deputy head of the administration of the occupied city of Novaya Kakhovka, died of his injuries after being attacked outside his home on the morning of August 6th. In addition, an organization called “Yellow Ribbon” claims to have distributed 1,200 fanzines in Kherson, promising bounties for the capture of Russian enemies or equipment. An organization says it has distributed over a thousand copies of a fanzine encouraging Ukrainian resistance to the Russians in Kherson, Ukraine. (YELLOW RIBBON)

“There are still two useful months of fighting, before a stalemate in the fall and winter,” said Jérôme Pellistrandi. “If the Ukrainians manage to reconquer as far as the Dnieper, they will protect part of their territory. Otherwise, it will start again next year.” This suggests, in the short term at least, a deterioration of the situation, on the model of Donbass since 2014, with a frozen front line and sporadic shooting on both sides. “Given the current progressions which fall within the kilometer or the hectometre”, adds Olivier Kempf, “it appears that the two camps are exhausted”.