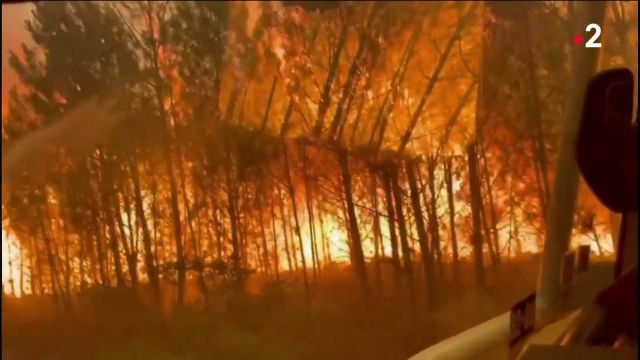 Gigantic fires are still devouring the Gironde and the Landes, on the evening of Thursday August 11. Farmers, residents, soldiers… As close as possible to the flames, a vast outpouring of solidarity was set up to lend a hand to the firefighters.

Barely arrived as reinforcements from the Tarn, these firefighters are already immersed in the furnace of the mega-fire, Thursday August 11. In the afternoon, the fire was still unpredictable, so powerful that it caused its own wind, and went in all directions. Additional evacuations were ordered during the day. Nearly 1,500 firefighters, from France and Europe, are mobilized 24 hours a day, against the fire. They don’t have a moment’s respite.

The objective of the fire soldiers is to save the houses at all costs. Since Wednesday evening, the fire has devoured an additional 1,200 hectares, and is approaching the town of Belin-Béliet (Gironde). The surface burned last July is in danger of igniting again at any moment. A perimeter of more than 40 km is under surveillance.

Soldiers came as reinforcements to put out the embers and turn the earth over, despite the extreme conditions. Simple inhabitants are also sometimes on the front line. “If we do not extinguish, in maximum 2 hours, you have flames of 2 meters”, confides an owner. Farmers also make their cisterns available.