We will go from carrying Apple products to having them carry us. The technology company is preparing its landing in the automobile industry with a self-driving electric car. Despite the secrecy of the company, its project is an open secret. This is how it is interpreted that the technology has just hired a senior Lamborghini manager, according to advanced two weeks ago Bloomberg. Is about Luigi Taraborrelli, which for the last two decades has been responsible for the chassis and aerodynamics of the models developed by the Italian brand. The jump to this new sector adds other surprises that the Cupertino company is preparing. His commitment to health is also getting stronger and he has very advanced mixed reality glasses with which he wants to break into the metaverse. Apple is determined to be more than just the brand behind the iPhone, iPad and iMac.

The iPhone on wheels

Taraborrelli’s is not the only signing that the company has made in the automotive industry. Apple acquired the services of a veteran Ford executive earlier this year, tasked with overseeing vehicle safety. In 2021 he enrolled Ulrich Kranz, former head of electric cars at BMW, and Stuart Bowers, director of Tesla’s autopilot systems. According to sources cited by Bloomberg, the Apple project already has hundreds of engineers from Mercedes, Volvo, Aston Martin, McLaren, Porsche or Waymo, the autonomous car brand of Alphabet, Google’s parent company. Asked by EL PAÍS about the recent hirings, a company spokeswoman highlights that they have a rule not to make comments on signings beyond those who sit on the Executive Committee and that they have nothing to share regarding the Apple Car project, which qualifies as “rumor”.

That is the official position of the multinational. Unofficially, it is known that Apple executives have been considering entering the automotive market for years. The project has suffered stoppages precisely because Tim Cook, CEO of the company, and other senior executives, did not quite see the product clearly. The latest movements seem to indicate that doubts about its viability have been dispelled. According to sources cited by Bloomberg, it would be considered to have it ready for 2025. An investigation of the Japanese financial newspaper Nikkei e Intellectual Property Landscape published last week revealed that Apple has requested between 2000 and 2021 at least 248 patents related to the automotive industry, including autonomous driving systems, car sensors, mobile connectivity, augmented reality or electric battery management. 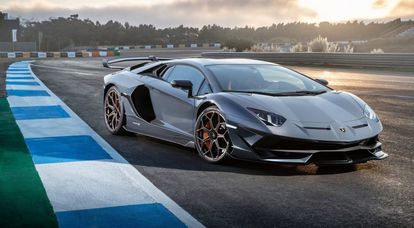 The Lamborghini Aventador is one of the star models that Luigi Taraborrelli has supervised during the Italian brand.

Why would Apple want to get into the automotive business? One of the answers is that the car is the last environment left to digitize. And, if the promise of autonomous driving ends up being fulfilled, the weight of artificial intelligence in cars will be increasing. Vehicles are computers on wheels. Indo-Canadian entrepreneur Salim Ismail, one of the founders of the Singularity University, actually refers to cars as “an app carrier on wheels.” And that’s what Apple makes: devices on which to use its apps.

The apple company is not the only technology company interested in the sector. Since 2009, Google has had a company, Waymo, dedicated to developing autonomous driving systems. Xiaomi and Oppo, two of the world’s biggest smartphone makers, also have projects underway to launch their own electric vehicles.

Little is known about what the vehicle Apple is working on will look like. According to some media reports, the technology company wants to launch a car radically different from what is being marketed right now. Hence also the doubts about the right time to launch it on the market. It is said that the intention of the company is that it be totally autonomous and that it does not even include a steering wheel or pedals. Its interior would be designed in such a way that passengers feel confronted, face to face. Screens and other entertainment elements would play a central role in the vehicle, as would augmented reality.

A doctor in the bracelet

Health is another field that Apple has been sowing for almost a decade in search of future business. The launch of the Health app in 2014 and, above all, of the Apple Watch in 2015 opened up a new field of data processing and collection that had hitherto been virgin for the company. The apple firm’s smart watch has several sensors that periodically perform measurements such as heart rate or, since the Covid-19 appeared, the level of oxygen in the blood. You can also estimate the hours of sleep, energy consumed or physical activity performed. 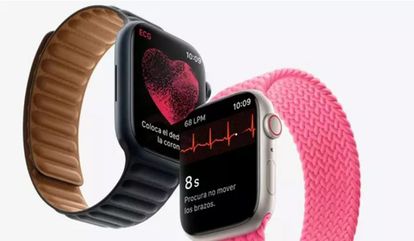 Apple engineers are working on the development of sensors so that the watch is capable of taking measurements of other vital signs, such as body temperature, blood glucose levels or blood pressure. They were pioneers in detecting atrial fibrillation with this device. The basic idea is to centralize all the medical information of the users. Or, in the company’s own words, “helping people take active care of their health by acting as intelligent guardians of their health and safety.” It even offers the possibility of uploading clinical documents and manually entering almost any type of data that the clock does not yet collect.

“Apple’s severe privacy policy makes them very good for the health environment, and their commitment to being the viewer of medical records has had a great impact in the US,” says Frederic Llordachs, co-founder of Doctoralia, a physician recommendation portal. Apple’s approach is, so far, that: collect all possible data and order it so that the user can dispose of it as he wants. “Their moves to make the Apple Watch a health-monitoring tool are very scientific, but they can’t scale outside of rich markets. That limits their expansion, but they serve as a mirror to make way for technology in health”, says Llordachs.

Apple is not alone in the race to colonize health. Amazon, Microsoft or Google are also active in this sector, which is set to gain weight in the coming years. The aging of the population in rich countries and the transition from healthcare medicine to predictive medicine models, based on individualized measurements of medical parameters through wearables to minimize visits to the doctor, they offer a large market to those who position themselves there. “Amazon is winning the game in telemedicine because they are better at the operation. Google is betting on medical artificial intelligence and Microsoft is inside all the hospitals in the world with Office and, now, with Azure. They are all scalable models. apple is hardware”, analyzes Llordachs.

Waiting for the metaverse

The secrecy surrounding the new Apple projects is total. Still, there’s a growing buzz in the nascent metaverse-related industry: the apple company wants to get in on the business. And he plans to do it, once again, contributing hardware. In this case, mixed reality glasses for interiors, that is, capable of superimposing digital images on reality, so that the user sees, for example, a digital character on the table with whom they can interact. The industry is clear that this will be the first stage in the development of the metaverse: the pure virtual reality environment will be reserved for very specific experiences, such as video games.

“Apple is expected to launch its viewer in the middle of next year,” explains Víctor Javier Pérez, coordinator of the Metaverse executive program at the ISDI business school. The company does not confirm or deny anything, but “there have been leaks in the assembly lines and even allusions to a new operating system that will be called RealityOS, which will presumably be used in reality glasses, have crept into part of its software. mixed”, adds the teacher. In May this year, a prototype of the glasses was shown to the company’s top managers during a board meeting, as published by Bloombergwhich means that the product was already advanced.

Little is known, once again, about the features of the viewer. It is said that its price will be around $2,000, almost double what the new Quest glasses that Meta will launch later this year will cost. “I think Apple will bring power, for all the work it has behind chips and sensors, and ergonomics, presenting a lighter and more comfortable device. It will be interesting to see the connectivity with other Apple products and if it sets new usability standards, as happened with the Apple Watch”, says Pérez.

This is Optimus, Tesla’s humanoid robot that Elon Musk wants to sell for less than $20,000

Do puns bring out the worst in us?

Why we are fascinated by fake news