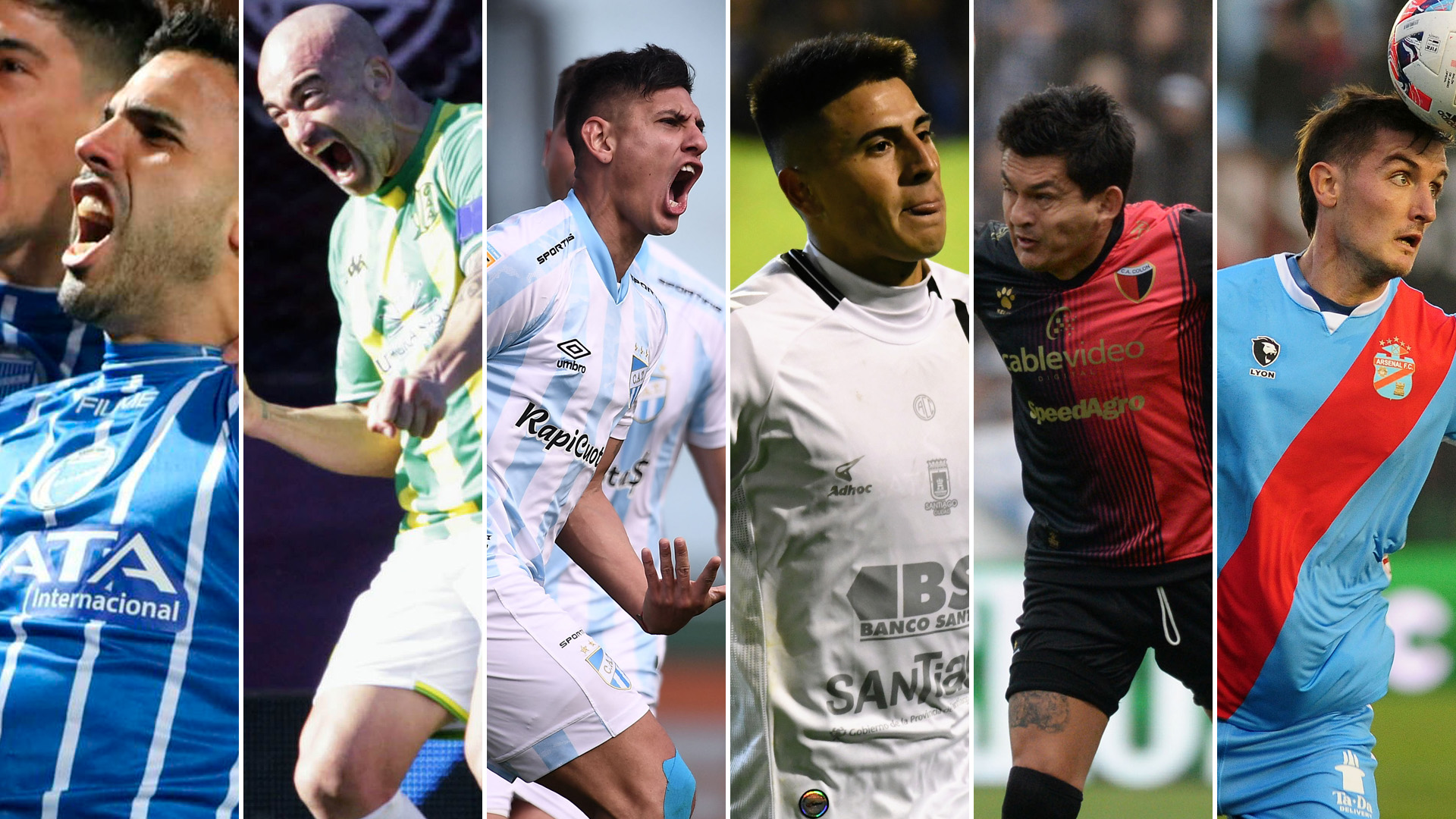 The date 13 of the Professional League began with three commitments that put at stake the top of the tournament, the classification to international competitions and the fight to avoid relegation.

Godoy Cruz beat Aldosivi 2-0 in one of the so-called “six-point” matches, which are played at the Malvinas Argentinas Stadium. It is that in that scenario two of the teams that fight hand in hand to stay in the top category came face to face. It was a triumph for the winemaker thanks to the goals scored by Salomón Rodríguez and Tadeo Allende.

The Mendoza started better and Franco Negri on the left was his best credential with his overflows. But there were no shots on goal against a tight Tiburón defense with five players at the bottom.

However, at 13 minutes an attack by Salomón Rodríguez entered the area and his shot hit the post and then crossed the net to open the scoring.

The control was of the locals, but without depth to be able to extend the advantage. At the beginning of the complement, the Bodeguero returned to show himself more in the field of Mar del Plata, who began to come out and gave a better image than in the first half.

In the final stretch Godoy Cruz got far behind and Aldosivi was close to equalizing. Juan Cuesta had the tie, but his shot was deflected by a defender. Then Santiago Silva won in the air, but José Canale closed right in the small area. And later Javier Iritier executed, but hit the post.

From attacking so much and not converting in the first against that Bodeguero had, he settled the match at 86 minutes with a good definition by Tadeo Allende before José Devecchi left. Then Allende widened the differences and put the third, but then the judge annulled it at the request of the VAR for a previous foul.

Tomba accumulated four games without victories, which moved it away from the leading positions in the standings and complicated it again in the averages, accumulating a total of 101 points, three more than Central Córdoba of Santiago del Estero and seven more than his rival on duty, who today would be going down to the First National. Then Patronato appears with 88.

El Tiburón, after the important victory against Lanús, was eliminated from the Copa Argentina and succumbed to Huracán. With 8 units, he appears in second to last place in the table.

On the next date, Godoy Cruz will open the activity with his visit to Junín to face Sarmiento, on Tuesday from 4:30 p.m. While Aldosivi will play again in a week when he receives Vélez from 4:30 p.m.

Atlético Tucumán returned to the path of victory and established itself at the top of the Professional League after beating Central Córdoba of Santiago de Estero by 1-0, at the Monumental-José Fierro stadium, in a match on the thirteenth date of the competition. Thus, the team from Tucuman adds 28 points and took 4 points ahead of the only escort Gimnasia y Esgrima La Plata; at the same time that he cut an adverse streak of 4 consecutive falls against the man from Santiago, who came with two successes in a row under the leadership of Abel Balbo and with the defeat he recommitted himself to the relegation zone by being second to last in the table of averages. The victory of dean it crystallized through a Renzo Tesuri header, 9 minutes into the second half.

In the José Fierro stadium filled with the Tucuman public, the homeowner promptly took center stage in the game based on the deployment of his midfielders for containment as well as for the generation of the game. That is why they demanded the team from Santiago to delay to contain them, which cost them a lot because on several occasions Ramiro Carrera and Armando Lotti reached definition positions, some failed in making decisions and in others they put goalkeeper César Rigamonti to the test, who he answered competently.

Although the clearest was Ramiro Ruiz Rodríguez when he entered the area from the right at the culmination of an interesting collective maneuver, after an assist between the lines by Lotti, who left him face to face with the visiting goalkeeper whom he could not beat because his Low and crossed shot was lost by the bottom attached to the right pipe of the rival goal, at 22 minutes. Central Córdoba only in the final passages of the initial stage was able to get out of the siege and balance the game by having more possession of the ball and between some “spicy” charges, Renzo López had a very clear chance whose violent shot was covered by the goalkeeper Bolivian Carlos Lampe, by deflecting it to the corner, at 45 minutes.

At the beginning of the second chapter, the dean with the same posture that he showed in the first to predominate in the actions and in this way he managed to get ahead of the scoreboard. A projection from left-back Gabriel Risso Patron led to an aerial cross that, in the center of the goal area, Railway, was connected by Renzo Tesuri with a header down and to the right of Rigamonti to set up the opening, in the 9th minute. That did not make him the leader of the championship and he went for more, with the good work of Joaquín Pereyra and Ruiz Rodríguez, who was joined by defender Manuel Capasso, not only with his firmness in defense but also with his headers in the front area in the stopped ball plays, with a couple of shipments that went very close to the Santiago goal.

In any case, the locals did not go through major shocks to keep the fair victory. Even when in the final stretches the Railway tried to play it all or nothing for equality, the technical director Lucas Pusineri reinforced the background of the tucumanos with a couple of defensive changes to maintain the advantage and ensure leadership in the competition. For the next date, the fourteenth, Atlético Tucumán will visit Tigre, next Wednesday the 17th at 4:30 pm; while at the same time, but the day before, Central Córdoba from Santiago del Estero will receive Colón from Santa Fe.

Colón and Arsenal tied 1-1 in a match that started with good intentions, but ended up getting entangled in the limitations of both teams, for the 13th. Professional League date. The locals took the lead with a goal from Tomás Sandoval, while those from Sarandí, who reached 17 units and added a point for the first time since 2012 at the “Cementerio de los Elefantes”, equalized thanks to a header from Ignacio Gariglio .

The local stopped with a line of four and with Picco and Alvarez as recovery midfielders, Bernardi with more freedoms, while Farias was located behind the two net forwards, Ramón Abila and the one who emerged from inferior Tomás Sandoval. Leonardo Madelón, very identified with Unión de Santa Fe, arranged two lines of four, with a little more freedom for Facundo Kruspzky, to approach Lomónaco and Cano, who pressed the exit of the locals near the halfway line . In the first 15 minutes, Colón tried to reach Medina’s goal, but he lacked many ideas, while Arsenal could not pass the half of the field, since their first objective was to prevent the locals from reaching their fence. The team led by Madelón is among the three teams in the Professional League that have given the fewest passes in this tournament.

At 17, a Ramón Ábila in very poor physical condition wasted a great opportunity against Medina, who was already on the ground. The former Boca Juniors tried to define Vaseline type at close range, but he shot it from above. A few minutes later, Arsenal put in a good counterattack that culminated in Lomónaco “breaking” Chicco’s chest, which he narrowed down very well, after stealing a ball from a scattered Goltz, who then hesitated again in another attack. Wanchope He redeemed himself in the 37th minute when he received a ball from Bernardi in the area, he hit Gariglio, he turned almost on the bottom line, the ball hit him, it passed under Medina’s body, Pérez could not clear it and Sandoval pushed it to score first.

In the second half, Arsenal sought to put a claw at the beginning, but Chicco dressed as a hero going at the feet of Lomónaco and Pittón to avoid a tie. But those from Viaducto kept going and took advantage of Goltz’s weak night, who kicked near the area and Baliño sanctioned a foul. The free kick was executed by Pérez who put it past the second post and Ignacio Gariglio appeared there to hit it with a header and score the equalizer for the Sarandí institution. And Colón lost his self-esteem, his defenders began to make mistakes, Chicco was forced to run from one side of the draw to avoid Sarandí’s second.

This was noted in the two yellow cards that Colón added in just 10 minutes of the second half, after adding 14 fouls in just under 60 minutes of the game. Rondina resorted to shouting to reorder his team and get the black clouds out of his head, while on the other bench Madelón seemed satisfied with the results of his technical talk at halftime, since his team controlled the match. The holding midfielders Pittón and Rivero supported Madelón’s strategy, since they took possession of the ball, took the ball from their rivals and quickly distributed it. In the last minutes of the second stage, Colón tried to surround Arsenal, but those led by Madelón repelled each advance from the locals, who lacked ideas and clarity to win.