Hidden in a makeshift camp in a gap in the town of Tubares, in the municipality of Urique, Choix, Gilberto PV alias “El Shakira” was arrested, the main operator of criminal leader José Noriel Portillo Gil, “El Chueco”, alleged murderer of Jesuit priests.

The undersecretary of Security and Citizen Protection, Ricardo Mejía Berdeja, reported that elements of the Sedena, the Mexican Army, the National Guard and state elements of Chihuahua participated in the operation where “El Shakira” was captured. 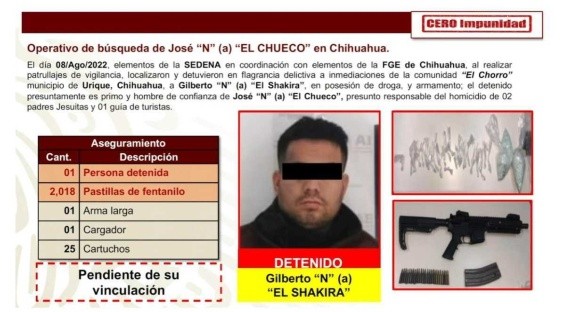 As reported, Gilberto, 29, is a direct relative of “El Chueco” and one of the main operating arms of that criminal organization in the area..

At the time of his capture, he was seized a .223 mm caliber rifle, with its magazine stocked with 25 useful cartridges, as well as a bag with more than two thousand pills of the drug known as fentanyl, weighing approximately 220 grams.

Due to the foregoing, he was placed at the disposal of the Attorney General’s Office for his alleged responsibility in the illegal possession of a firearm and simple possession of narcotics.