PSV Eindhoven-ASM: Monaco eliminated from the Champions League after their defeat in extra time against the Dutch 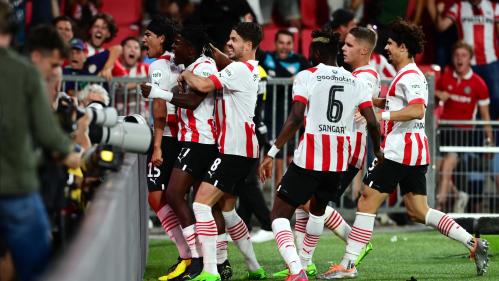 After 120 minutes of tension, AS Monaco ended up giving in. Held in check in the first leg at the Louis-II stadium (1-1), Philippe Clement’s men lost on Tuesday, August 9, after extra time against PSV Eindhoven (3-2) in the third preliminary round return of the Champions League. They will therefore evolve in the Europa League this season.

Our Monegasques lose in Eindhoven and will play the Europa League next September. #cruel

In a Philips Stadion in fusion, the Monegasques, led 1-0 at the break, managed to concretize their domination in the second act. Guillermo Maripan (1-1, 58th) then captain Wissam Ben Yedder (2-1, 70th) thought they were keeping the Rocher club’s C1 dreams alive. But at the very end of regulation time, Erick Gutierrez came to cool the Monegasques (2-2, 89th). Pushed into extra time, Monaco cracked ten minutes from the end, ahead of the head of Luuk de Jong (3-2, 109th).

Philippe Clement and his men lost big. Self-proclaimed “favorites” by their own coach before this return match, Wissam Ben Yedder’s teammates fell to a valiant team from PSV Eindhoven. But in the light of these 120 minutes, the regrets can be enormous because this Monaco had the weapons to win. “We can go out with our heads held high, even if we are very disappointed. We had the quality to pass this round. The season remains long, we will have to digest that”, reacted defender Axel Disasi on Canal +.

“Even though we lost, we were the better team in both games. They were more effective than us.”

at the Canal+ microphone after the meeting

Dominator, Monaco, certainly, was. So what did he miss? No doubt a bit of luck. The post of Maripan (54th) and at the helm of Embolo (92nd) will disturb the sleep of some supporters of the Red and Whites. But the ASM defense also showed naivety and passivity in the aerial duels, especially in the two situations that led to the last two Dutch goals.

Gelson Martins, Jean Lucas or Sofiane Diop pushed hard until the last second to try to come back to the score but the ax fell: the players from Le Rocher will, like Nantes and Rennes, compete in the C3 this season. “The Europa League is also very interesting,” Disasi tried to assure somehow after the final whistle. Still, for the second year in a row, Monaco fails at the gates of the C1.

Last season, Niko Kovac’s players took an extra step, losing in the play-offs against Shakhtar Donetsk (0-1, 2-2 after extra time). This Tuesday, the disappointment is just as strong since this defeat in Eindhoven deprives Philippe Clement’s group of a shock against Rangers, finalists of the last Europa League.

It now remains to bounce back quickly and not let go of the ballast in the league, as was the case 12 months ago. “We have to use the experience of last season. We have to rest quickly, get our heads straight, but I’m not worried, we have a quality group”, said said Axel Disasi.

This defeat will not suit France for the UEFA index: still 5th, it is closely threatened by the Netherlands. The reform of the Champions League planned for the 2024-2025 season makes this 5th place crucial, since it will guarantee three automatic qualifications for the C1 for the first three Ligue 1 clubs, and a passage through the preliminary rounds for the fourth. .