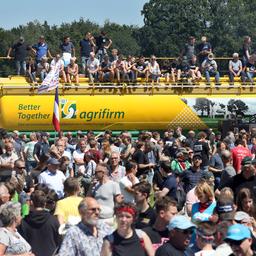 Next Thursday, Prime Minister Mark Rutte and other cabinet members led by former minister Johan Remkes will meet with representatives of the agricultural sector. Those companies financed the farmers’ protests but now do not want to come and talk, according to a tour of NU.nl. So far, only Rabobank and a representative on behalf of the supermarkets have joined the conversation.

Negotiations between the cabinet and farmers on nitrogen policy seem to be heading for a long war of attrition. Last Friday, after the first conversation with Rutte and members of the cabinet led by Remkes, farmers’ organizations already expressed their dissatisfaction. Farmers Defense Force leader Mark van den Oever even threatened with “the hardest actions ever”.

A tour of NU.nl shows that billions of companies in the agricultural sector will avoid a conversation with the cabinet as long as no promises are made to farmers. Next Thursday, cabinet members want to talk to representatives of those companies. Until now, only Rabobank and representatives of the supermarkets have accepted Remkes’ invitation.

It is striking that the large companies now refuse to enter into discussions, because they have fully supported the farmers’ protests against the nitrogen policy since 2019, also financially. For example, the action group Agractie of campaigner Bart Kemp received support from the animal feed company For Farmers.

“When I was still completely alone, I was approached by the director of ForFarmers Netherlands,” Kemp told NU.nl in 2019. “The company supported my goals and approach and jumped in at lightning speed.”

There is a lot at stake for companies. If the government’s nitrogen plans go ahead, this is expected to lead to a significant reduction in livestock. If farmers keep fewer animals, that means less animal feed, fewer stables and less milk. And that means less turnover.

Dairy giant Royal A-ware (including maker of Zaanlander cheese for Albert Heijn) received an invitation from Remkes at the end of July. The company will not comment on this “as long as the cabinet does not promise to follow a different course”, a spokesperson told NU.nl.

Royal A-ware has a turnover of 2.2 billion euros and a profit of 51 million euros. CEO Jan Anker of the company is in the Quote 500 with equity of 120 million euros. The company has plans to expand a cheese factory in Heerenveen, for which permits have been applied for. That is why the company has every interest in ensuring that the livestock is not reduced.

Another major player is animal feed company Royal De Heus (turnover 3.2 billion euros). That company already announced before the first meeting between farmers and the cabinet that it would not accept Remkes’ invitation. Only when the cabinet is prepared to discuss “the policy, timetable for the measures and method of nitrogen reduction” will the company be prepared to join the conversation. A spokesperson informs NU.nl that De Heus will stick to this position and “at the moment” will not accept the invitation.

‘We will not accept Remkes’ invitation for the time being’

Agrifirm agricultural cooperative, to which ten thousand farmers are affiliated and which supplies livestock feed, among other things, will not attend the Remkes meeting either. A spokesperson says that it is “first and foremost about the future of individual farmers and growers”. Only “after that” does Agrifirm want to share its vision. In a statement, the company emphasizes the “need to protect the farmers’ revenue model” and “the opportunities that exist in the field of innovation”.

The Dutch Animal Feed Industry Association (Nevedi) follows the same line of argument as Agrifirm: the cabinet should first come to an agreement with the farmers. The spokesperson for Nevedi says that he will not accept Remkes’ invitation for the time being. First, “the commitment and frameworks of the discussion to the satisfaction of the farmers’ organizations” must be completed.

The same sound comes from slaughterhouse giant Vion. The cabinet must first enter into talks with the “primary sector” (that is, the farmers). After “sustainable progress” from these talks, VION is prepared to join the meeting, according to a spokesperson.

A spokesperson for moderator Remkes does not want to release the list of companies that have been invited for the meeting on Thursday, August 18. “We are still busy making an inventory and will make the discussion partners public once we have informed all participants.”

Before Rutte and other cabinet members talk to industry representatives next Thursday, a meeting with nature and environmental organizations is scheduled for next Monday.