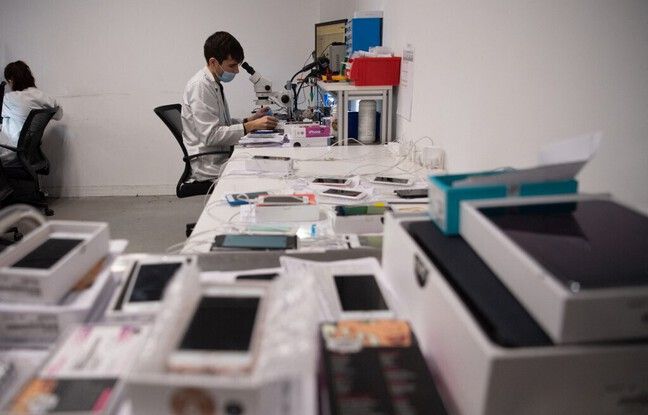 “I am a junkie, you are a junkie, humanity today is drugged and completely dependent on the digital. » Frédéric Bordage, founder of the independent collective GreenIT. fr in 2004, lays the framework for the contemporary model, spurred on by high-tech by the generation of Millennials and the following, ultra-connected but also concerned about the environment. However, manufacturing state-of-the-art equipment is particularly costly for the planet today. “To what degree of environmental impact are we willing to go to enlarge the size of the TV that sits proudly in the living room? “, further questions the expert in responsible digital and digital sobriety.

“For a smartphone, 80 to 90% of the environmental impact comes from the production phase. Refurbishment and repair are the first levers to be mobilized, particularly in Europe, because they are levers over which we have our hands, ”abounds Maxime Efoui-Hess, digital and industry lead engineer within the general interest lobby The ShiftProject. For Frédéric Bordage, the observation is the same: “More than three quarters of the environmental impacts of digital technology are linked to the manufacture of equipment. By helping users of 20minutes.fr or other online services to keep their equipment longer, we effectively limit them”.

And companies, how do they adapt in a world where crises – Covid-19, war in Ukraine and disruption of gas supplies, fires, heat waves… – are increasing due to climate change attributed to a society? who is always looking for more? “Today, we are hot and we fear a blackout this winter in the middle of the cold”, summarizes Maxime Efoui-Hess.

The emergence of new practices and new professions

“It’s an aberration that some corporate workstations benefit from new, state-of-the-art equipment when they absolutely don’t need it,” says Alexis Valero, founder of Rzilient, a company that sells an IT services platform, with including a marketplace offering refurbished equipment. “This is one of the pillars of our value proposition, but refurbishment also involves reassigning pre-existing equipment when we arrive, within the same organization,” he adds.

With the advent of Back Market, which “evangelizes” reuse and the solidarity economy, mentalities are changing. “With its ad on “New is old”, Back Market brings in its wake a whole generation that finds it much cooler to optimize its budget and the environment”, analyzes Isabelle Albert, author of Tech it green: digital transformations and transitions ecological (2020). “Typically, a blockchain developer cannot work on refurbished hardware. But each time, we first recommend refurbished equipment, which we put in full compatibility with the needs of companies, ”abounds Alexis Valero, who prides himself on having only refurbished equipment for his thirty employees. “A sales rep who just opens PowerPoint, emails and PDFs has no valid, rational reason to work on the latest MacBook M1.”

He readily admits that it is easier for Rzilient to address SMEs, “more traditional, less techie” (translate “traditional and quite far from the world of tech”). “There is a really widespread misunderstanding of everything related to IT management: what is your IT department for? “, he asks.

Today, corporate refurbishment still has some weaknesses, which affect its implementation. For Alexis Valero, “it is sized for B to C, but not yet for B to B”. Thus, companies buy their new equipment with a range of services, software, programs and support that refurbished products still offer very little. Without forgetting the share of acculturation of the employees, “permanently bombarded with advertisements on the latest devices and at the cutting edge of technology”, he notes.

Has a state of mind and values ​​in favor of an ecological digital, it provides at the same time a “win-win” service. “Buying and using new and storing it after two years in a storage room without trying to repair or recycle it generates many negative financial and extra-financial externalities for SMEs,” he explains. However, by extending the life of their IT fleet, Rzilient allows its customers to save money financially and on its overall environmental impact. “What to advance the strategic reflection on the evolutions of our model which changes the way of producing, and designing and consuming its products”, abounds Maxime Efoui-Hess.

And planned obsolescence in all this?

“Planned obsolescence is a relatively well-marketed concept, but it is not necessarily always an operational reality, notes the founder of Rzilient. We are able to double the lifespan of computer equipment by increasing it from an average of three to six years”. While on paper, consumers are convinced that they must change their devices every two or three years. The idea is well anchored, and made necessary in a society that runs frantically behind infinite growth.

“For fifteen years, we have hidden the basic issues: why is it not easier to repair electronic equipment? asks Frédéric Bordage ironically. And to planned obsolescence is added the increasingly used word greenwashing. “Showing a green paw is very trendy, but as long as the methods and figures used are not the right ones, greenwashing has a bright future ahead of it”, denounces the GreenIT expert. Fr. He believes that, in its current dimension, the digital world in which we evolve has a programmed end: “in thirty years, our children will no longer be able to receive treatment thanks to digital equipment”, warns the expert again.