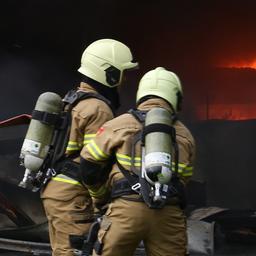 The fire in the dune area near the Brouwersdam on the southern edge of Ouddorp has been extinguished. The fire was extinguished around 1.30 am and the last fire-fighting vehicles were able to return to the barracks.

Emergency services responded en masse to the fire. The fire brigade did everything in its power to prevent the fire from spreading further to the holiday park and the RTM museum Ouddorp, which includes locomotives and carriages. In the end, two wagons could not be prevented from catching fire

The nearby holiday park at De Eco Punt had to be partially evacuated. The guests were received in the sports hall at the Dorpstienden-Ouddorp, but were able to return to the park on Tuesday in the early evening.

The emergency services scaled up to a ‘very large fire’. The scaling up was necessary because of the drought and the risk of the flames spreading. “The problem is that you need enough water to extinguish and that is sometimes difficult to obtain in the area,” explains a spokesperson for the Rotterdam-Rijnmond Safety Region.

In order to get enough water for extinguishing, four submersible pumps of the fire brigade were alerted. These pumps deliver 7,000 liters of water per minute, according to the VRR. An army fire fighting helicopter also flew over the incident to assist. A water bag was hung under the helicopter that was filled with water from the Grevelingenmeer. The deployment of the fire fighting helicopter, in which about 62,500 liters of water was dropped, was successful: a large part of the fire was extinguished as a result.

The smoke clouds were clearly visible in part of Zeeland. Because the fire was in a dry area, there was a serious risk of fire spreading and smoke nuisance. The fire brigade was therefore on site with several units. A lot of fire equipment had also been sent from Zeeland. It concerned various tanker syringes from posts on Schouwen-Duiveland and water trucks from Burgh-Haamstede, Serooskerke (W) and Terneuzen.

According to a spokesperson for the VRR, the fire was discovered near the provincial road N57. The fire spread very quickly and flames were meters high, which was accompanied by considerable smoke development. It was clearly visible from afar – and therefore also in Zeeland. The fire spread to the other side of the provincial road. The fire was scaled up from GRIP-1 (the lowest level of coordinated multi-corps incident response) to GRIP-2 around 5 p.m. Holiday park Punt West in Ouddorp has been partly evacuated by the emergency services. The fire was still spreading at the time, the Safety Region reported. The N57 was temporarily closed from 17:00 to 19:00. Traffic was diverted via the Grevelingendam.

A Defense fire fighting helicopter has also been called in to deliver large amounts of water through the air. That approach proved successful. After the helicopter had done its job around 10.30 pm, the extinguishing of the site was continued by teams from the Twente region who are specialized in wildfire fighting. Together with the wildfire fighting team, the fire brigade is making up the last remnants of the fire, the VRR reported at 10.30 p.m. The fire service expects to be here for the rest of the night.

The drought may be a possible cause of the fire, according to the spokesperson for the VRR. “Certainly with this weather we are extra alert, with the drought and bright sun. Then a piece of glass from waste can already cause a fire.” There are currently no indications that the fire was started.