“Every day you are brighter”: Noroña attacked Diego Luna for criticizing the initiative of the National Guard 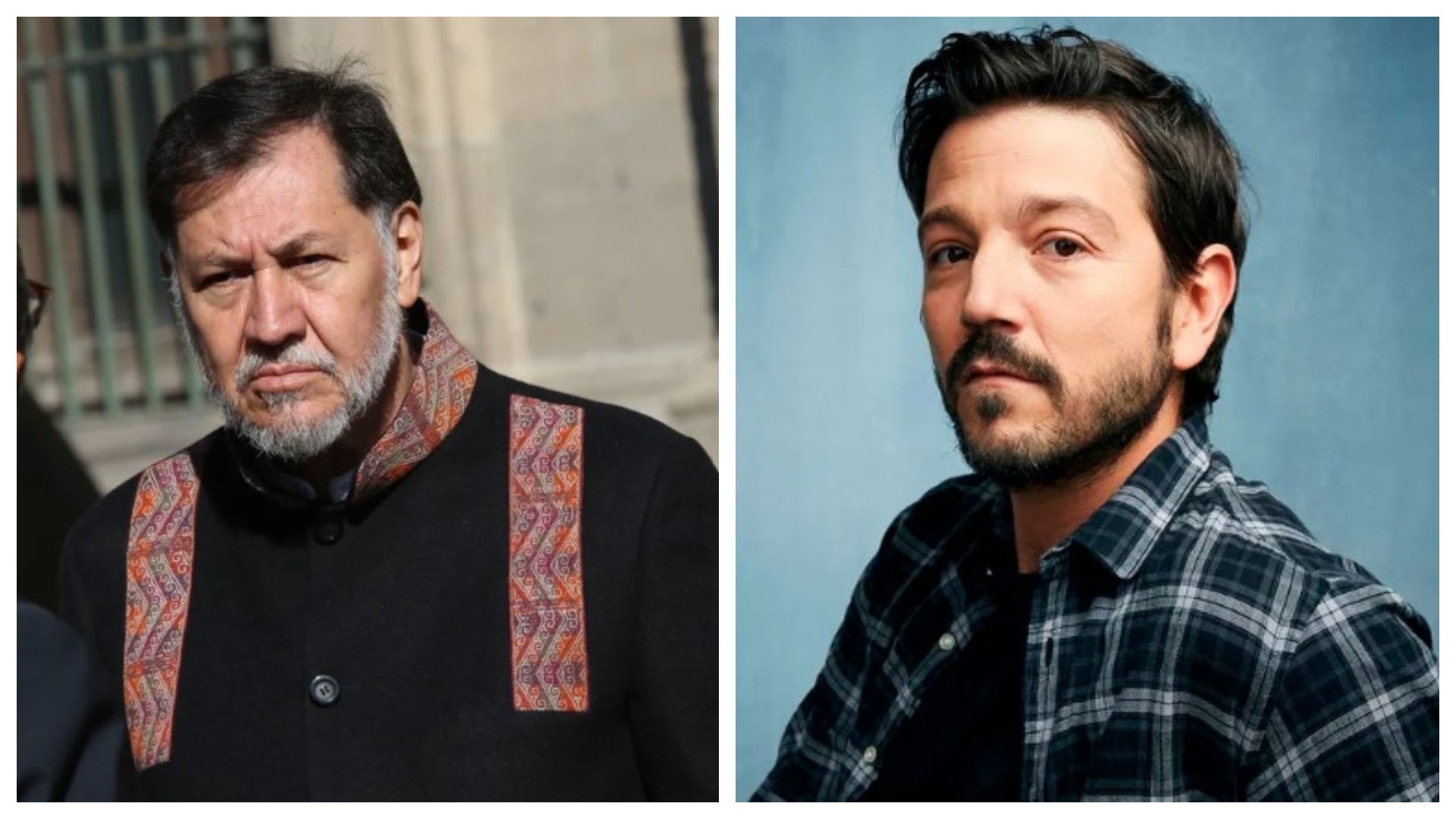 Gerardo Fernández Noroña, federal deputy of the Labor Party (PT), launched himself against actor Diego Luna for criticizing the possible decree of President Andrés Manuel López Obrador (AMLO) with whom he wants to join the National Guard (GN) to the ranks of the Secretary of National Defense (Sedena).

And it is that the actor shared a press release from the civil organization security without war with which he showed his rejection of the intentions of the head of the Executive: “Delivering the National Guard to the Sedena by presidential agreement is a military coup against the constitution. It is contempt for Congress, the imposition of the Armed Forces on civil power and a permanent condemnation for peace and the new and previous victims.”

In addition, the text indicates that the Supreme Court of Justice of the Nation (SCJN) “must convene public hearings with victims and experts to release the issues that they have not wanted to resolve.” However, they called for citizens to demonstrate “against the greatest threat that democracy has received.” 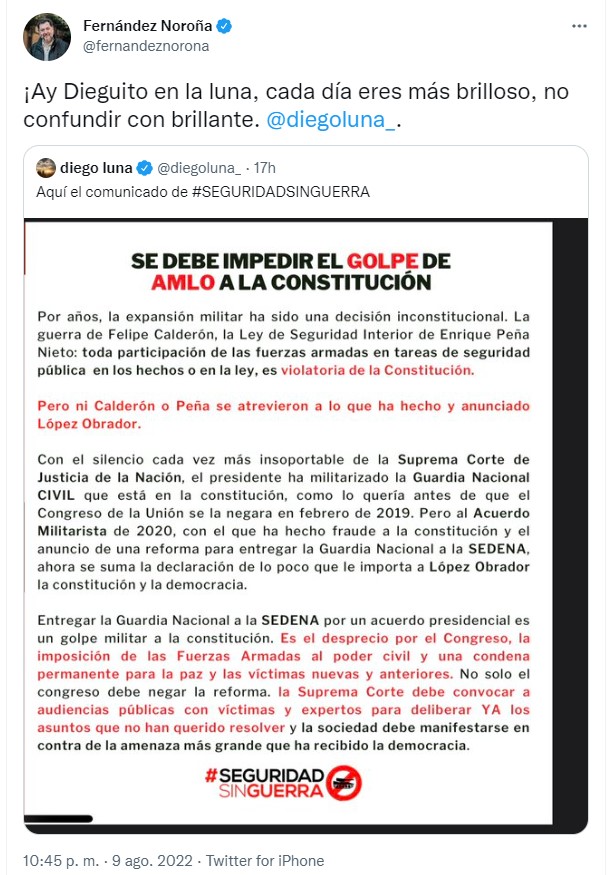 Given this, the petista wrote: “Oh Dieguito on the moon! Every day you are brighter, not to be confused with [email protected]_”.

It was on August 8 when the Mexican president announced that he would issue a reform proposal so that the GN would be part of the Sedena, a fact that caused various personalities from the opposition bloc to label him a “dictator”, since they said that with this will “militarize” the country.

“Already by agreement of the presidency, the security that has to do with the National Guard, passes completely to the Secretary of Defense. The operational issue is already in charge of Sedena”, said the Tabasco during his press conference on Monday. 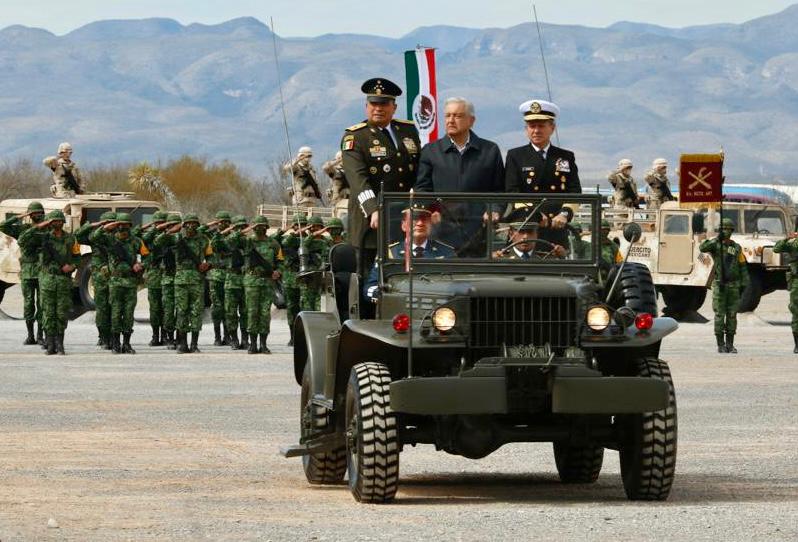 López Obrador will seek for the GN to join the ranks of the Sedena (Photo: Presidency)

When questioned about whether this measure would mean “skipping” the Legislative power, the Chief Executive assured that he was not taking measures contrary to those established in the Constitution.

“I have to use the legal margins that we have to move forward because I have problems to solve. I have to deliver good accounts to the people and I have an opposition bloc that does not help at all”, he sentenced.

After the Tabascan made his intentions known, various opposition personalities resumed a series of statements in which the Mexican president condemned the “militarization” of the country. During the last years of Felipe Calderón’s six-year term (2006-2012), the then candidate for the presidency of Mexico criticized “the failed security strategy.”

“It is not with the Army that security problems can be solved (…) We cannot accept a militarized government,” asserted the Tabascan on April 26, 2010 when he was part of the opposition. 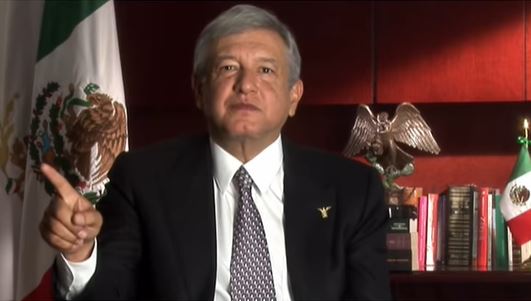 On the other hand, diplomatic cable 06Mexico05, leaked by the website WikiLeaks Eleven years ago, he exposed that in 2006, López Obrador confessed to Tony Garza, former United States ambassador, that, in the event of winning the presidency of Mexico, his intention was to give the Army greater power.

Diplomatic cables from Tony Garza to Washington indicated that the then presidential candidate tried to convince the US government to lead a solid and strong government, even insisting that he could request financial support from the US in the fight against drug trafficking.