Alfaro confirms five detainees and a criminal killed after blockades

After the meeting held this Wednesday by the Security Table of Jalisco, in which mayors and federal authorities participate, the governor of the Entity confirmed the arrest of five criminals and one more killed. 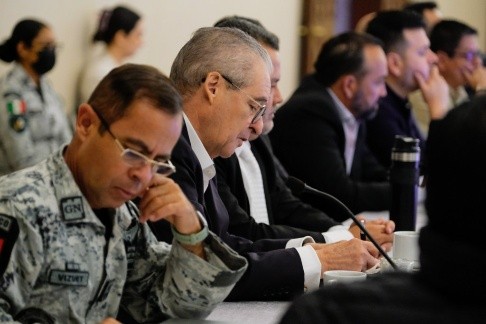 Image of the Security Table that took place this Wednesday morning. SPECIAL / Government of Jalisco

He also pointed out that the military authorities managed to seize 31 long weapons, four machine guns, a short weapon and explosivesas well as nine vehicles and a vehicle with handmade armor of the so-called “monsters”.

He reaffirmed that what happened stemmed from an operation that the federal forces carried out in the municipality of Ixtlahuacán del Río “to confront organized crime groups who, in turn, as a reaction, tried to block the exits of the city so that the reinforcements could not reach this point”.

“It is an operation about which the federal authorities will provide information later. It is an operation coordinated by the Mexican Army, and what is up to us at this table is to be focused and in permanent communication and coordination to guarantee that our city is well cared for,” said the state president.

In recounting, he noted that There were six points where the insecurity events occurred, which left three trucks, two private vehicles, a soft drink delivery truck and a convenience store on fire in Zapopan, in addition to seven vehicles burned in the entrances of Ixtlahuacán del Río, thus adding 13 affected vehicles. During the events, the criminals also threw punchallantas in the city.

“Fortunately, there were no losses in the burning of these vehicles, only material losses,” he added.

Finally, he pointed out that the Metropolitan Coordination Table will meet permanently on security matters to maintain the coordination of the different police and military corporations, in order to keep the population informed through official accounts to avoid false information.

“What we need is for people to know in a timely manner what is happening and that is the work on which we are going to concentrate, coordinate, communicate things properly and wait for the federal authorities to give the details of the operation. that gave rise to all these circumstances”, he concluded.

During the “morning” press conference this Wednesday, the President of Mexico, Andrés Manuel López Obrador had advanced that several people were arrested for these violent acts: five of them in our state and nine more in Guanajuato.

He confirmed that among the events that triggered the violent acts was the meeting of capos of the New Generation Cartel (CNG), among whom were “El Apá” and “Doble R”, although they were not arrested by federal forces. In the course of the day they will offer more information about these catches.