Public transport: Vans are projected to feed Line 4 of the Train

The plans for the operation of Line 4 (L4) of the Light Rail to Tlajomulco include the Service Basins, which consist of the operation of Van-type trucks (with a maximum of 19 passengers) to connect users of the mass transit corridor with subdivisions and nearby neighborhoods.

The project details that The purchase of 57 vans and 66 trucks will be required as part of the L4 feeder fleet. They calculate an investment of 250 million pesos, without specifying the courses or the areas they will cover. The Service Basins were integrated into the law as the model to cover the areas where trucks do not arrive and replace motorcycle taxis, but today they operate irregularly in peripheral neighborhoods.

The Comprehensive Mobility Model of the South Zone of the Guadalajara Metropolitan Area includes motorcycle taxi stops among the elements that the L4 stations will have. “The general program of the station is made up of the following elements, which may vary depending on the possibilities of land in the area around the station: regional bus stops, bays for urban buses, taxi and motorcycle taxi stops.” The document does not indicate whether the motorcycle taxis will operate as part of the feeder system.

Regarding the reorganization of transportation, it is emphasized that they identified 14 routes that are in operation in the area and that, added to the demand model, generate the natural supply of the project. Northern Federalism. Van-type trucks extended their operation to different parts of the metropolis. THE INFORMER / A. camacho

In limbo, Service Basins that are going to replace motorcycle taxis

Although for six years the migration of motorcycle taxis to the Service Basin scheme was included in the law, which would use safe vans to make the transfers, the regulation has not been applied and the census of units that provide service has not been updated. mototaxi.

The former director of the Institute of Mobility and Transport, Mario Córdova Spain, considered that the growth of the city with the authorization of dispersed subdivisions, triggered the proliferation of this service modality, since the authorized public transport routes do not reach those places.

“This model of mototaxis was imported from countries like India, they were practically brought by the first housing developers in Tlajomulco. Initially, the government approved a temporary presence with the commitment that they would be transformed into other types of larger capacity units and even electric vehicles. Obviously that never happened.” said.

Córdova Spain recognized that the past state administration, of which he was a member, left the issue pending, but considered that in the almost four years of the current administration little has been done to apply solutions.

“When I was in charge of the Mobility Institute, we generated the norm regarding the Service Basins, I insisted a lot with the secretaries on the solution to this problem because it is in the hands of the Ministry of Transportation, but the matter was always pending,” he commented. .

He added that Unions have grouped drivers and owners together, complicating their migration to a safer model for users.

Diego Monraz Villaseñor, Secretary of Transportation, commented that at the end of this year the first Service Basins will begin operations with trucks that would replace motorcycle taxis. In a radio interview, the state official blamed the growth of irregular transportation on the past administration.

The regulation of vans and motorcycle taxis that provide irregular transportation services is one of the pending issues that the new Mobility and Road Safety Law must address, reported deputy Mónica Magaña Mendoza, president of the Mobility Legislative Commission.

The deputy of Morena, Óscar Vázquez Llamas, member of the Commission, maintained that the proliferation of irregular transport is due to the need of citizens to mobilize and that the authority does not provide a safe alternative to the inhabitants.

Issues such as regulation the circulation of freight transport and motorcycle taxis should be discussed as part of the reforms to harmonize state legislation with the new General Law of Mobility and Road Safety, considered Salvador Zamora, municipal president of Tlajomulco. He explained that he maintains the request to reinforce the measures to order cargo trucks without affecting the economy.

“It seems to me that one of the points of discussion will be the issue of cargo transport regulation, there is a measure in force that we are seeking to reinforce so that it is complied with and of course that in the upcoming discussion, we hope that the Tlajomulco proposal can be taken. to update the schedules, as long as it does not affect the economy of the city,” he said.

He added that They will seek to include the regulations on school transport and the legislation to specify the operation of vans from the Service Basin that replace motorcycle taxis. “We continue with a work agenda with the Ministry of Transportation on the subject of motorcycle taxis and to generate new feeder routes for the mass public transportation system and the one we are going to have with Line 4,” he pointed out.

After the entry into force of the new General Law of Mobility and Road Safety, which includes elements such as standardizing the maximum speed limits in force throughout the country, the state Congress has yet to adjust local laws to the new national provisions. 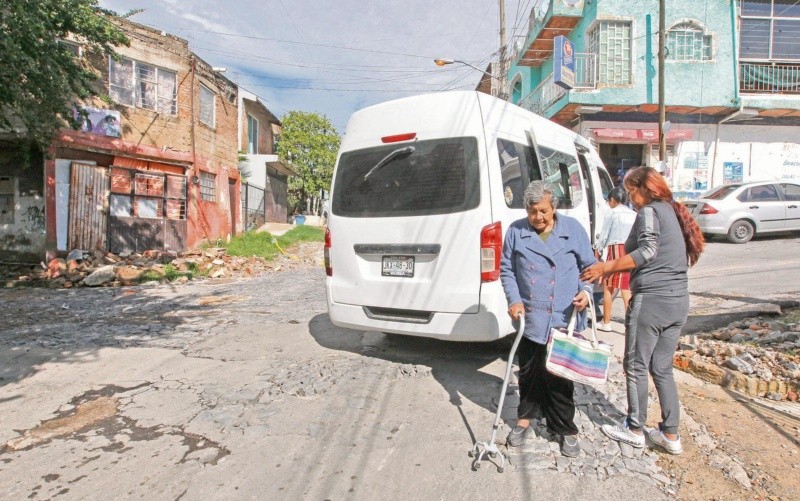 Only option. Some people with limited mobility need the service to get to their homes. THE INFORMER / A. camacho

They proliferate in the city

Need. The proliferation of irregular transport such as motorcycle taxis occurs due to deficiencies in the coverage of established public transport that does not cover peripheral areas, commented Mario Córdova, an academic at the University of Guadalajara.

Increase. The specialist added that the extended urban growth with the authorization of subdivisions without guaranteeing services contributed to the proliferation of motorcycle taxis. In the last state administration, a register of motorcycle taxis and a survey with service providers and users were made.

Ley. To provide transportation to subdivisions on the outskirts, where truck routes do not reach, the Service Basin scheme was included in the law, which proposes the use of safer trucks. Since October 2016, the technical standard that regulates the specifications of vehicles to provide service in conurbation areas has been published.

Norma. Regarding the Service Basin model, the standard states that the objective is to guarantee quality, safety and efficiency. The basins imply replacing motorcycle taxis with vans with a capacity of up to 19 passengers.

Details. The document specifies that they will be Van-type trucks, two meters wide, five to 7.5 meters long and a maximum of three meters high. Another of the characteristics of the vans that the Service Basins would use is that they would be electric, hybrid or natural gas vehicles.

Security. They are also prohibited from carrying standing passengers and ask that at least 20% of their total seats be for the use of people with disabilities, pregnant women or the elderly.

People who regularly use a mototaxi recognize that it is an unsafe service, but they need it to get to their homes. According to the study carried out in the past administration by the Metropolitan Mobility Institute, the consulted users identified insecurity, low capacity and that they are not comfortable as their main disadvantages.

In the advantages section, they highlighted that they help them reach their destination faster and that their cost is lower. They said they make between one and three daily trips mainly to get to or from their home.

Although they describe it as insecure and uncomfortable, 93.6% of the users consulted said that this type of service benefits society.

When questioned on the subject, those who are not regular motorcycle taxi users commented that it would be their last alternative to get around and they would only use it in case of an emergency.

On the other hand, the study “Moverse in GDL”, carried out by Jalisco Como Vamos, identified that people who use irregular transport such as motorcycle taxis are among those who report having a worse time in transport and who expressed more dissatisfaction with their mobility.

It also stands out that six out of 10 people from Guadalajara spend at least three hours a day in a bus to go to school, to work and to carry out the rest of their daily activities. The evaluation, published in 2020, indicated that the inhabitants of the Guadalajara Metropolitan Area are dissatisfied with the quality of public transportation.

Some motorcycle taxi drivers offer trips around the España station, on Line 1 of the Light Rail. THE INFORMER / A. camacho

The thousands of motorcycle taxis that circulate in the Metropolitan Area of ​​Guadalajara (AMG), and other medium-sized cities in Jalisco, generate income of at least 47.5 million pesos (MDP) per month, revealed the census on motorcycle taxis carried out by the Mobility Institute in 2016, which has not yet been updated.

The document, based on surveys among users and drivers, reported that the average monthly income in the AMG was 37.7 million and another 9.8 million pesos in medium-sized cities.

They detailed that In the metropolis, 99 thousand 985 trips were made on average per day, while users said they spent approximately 38.50 pesos on their usual transfers. In the applied survey, the drivers commented that they made 46.7 trips on average per day.

Regarding the number of units, they identified that 2,330 worked in bases, 1,873 in the AMG and 457 in medium-sized cities. In addition to 268 baseless vehicles.

The study pointed out the existence of 21 cooperatives that group drivers, and 77 out of 100 drivers commented that the mototaxi they were driving was not their property. Additionally, six automotive agencies were identified where the most used models are sold as motorcycle taxis.

What do you think of the service of vans and motorcycle taxis?