Security in Jalisco: They are looking for a man in El Seco stream; he disappeared while swimming

The rain that has fallen in recent days led to the gabion number five of the Arroyo El Seco, in Zapopan, being filled with water, and was taken advantage of by a man, who allegedly went swimming in it yesterday afternoon, Sunday.

According to what was reported by the Municipal Coordination of Civil Protection and Firefighters Zapopan, neighbors reported that at the intersection of Colorines and Las Rosas they saw when the man had entered the body of water and was swimming in it, but then he began to despair and already They didn’t see him leave.

Elements of the coordination moved to the place to begin the search for the man of approximately 40 years of age, however, The work was complicated by nightfall, for which it was suspended and restarted this Monday at 8:00 a.m. at the intersection of Rosa and Jazmín, without any news of it so far..

The works are carried out based on what was reported by the neighbors that “they did not see the man leave”, although so far it has not been confirmed that there is the presence of any person inside the channel; will work until discarded.

Jaime Moreno Cacho, Director of Operations of the Coordination of Civil Protection and Firefighters of the Zone, explained that it is common for people to enter this body of water, however, he recommended that this not be carried out, since it is not about a pool, but infrastructure of the stream to stop the material and palisades that come down from La Primavera Forest during the rains, which prevents the stream from overflowing and reaching the neighborhoods and homes, as was experienced last year in the area. 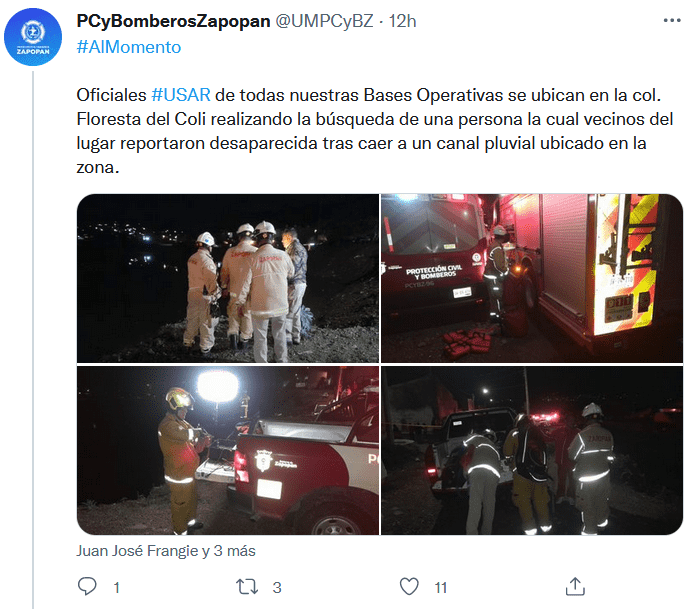 “There is a lack of preventive measures by the inhabitants of the area. We have been insisting, we come every day to verify the conditions of the five gabions, eleven in the morning and 5:00 p.m. in the afternoon to verify the conditions and perform maintenance. The other part is that we ask citizens to support us in preventive actions to avoid it, they are not bodies of water to be entering to bathe or swim or anything.”, expressed the director.

The search has been complicated due to the early morning rain that raised the level of the water collected in the gabion, but this morning the aquatic search and rescue team has already arrived to proceed with the work that will be done in depth.

Security in Jalisco Rains in the country Arroyo El Seco