Miguel Ángel Borja was attacked in the match with Independiente: the referee did not sanction a penalty, nor did he expel the aggressor 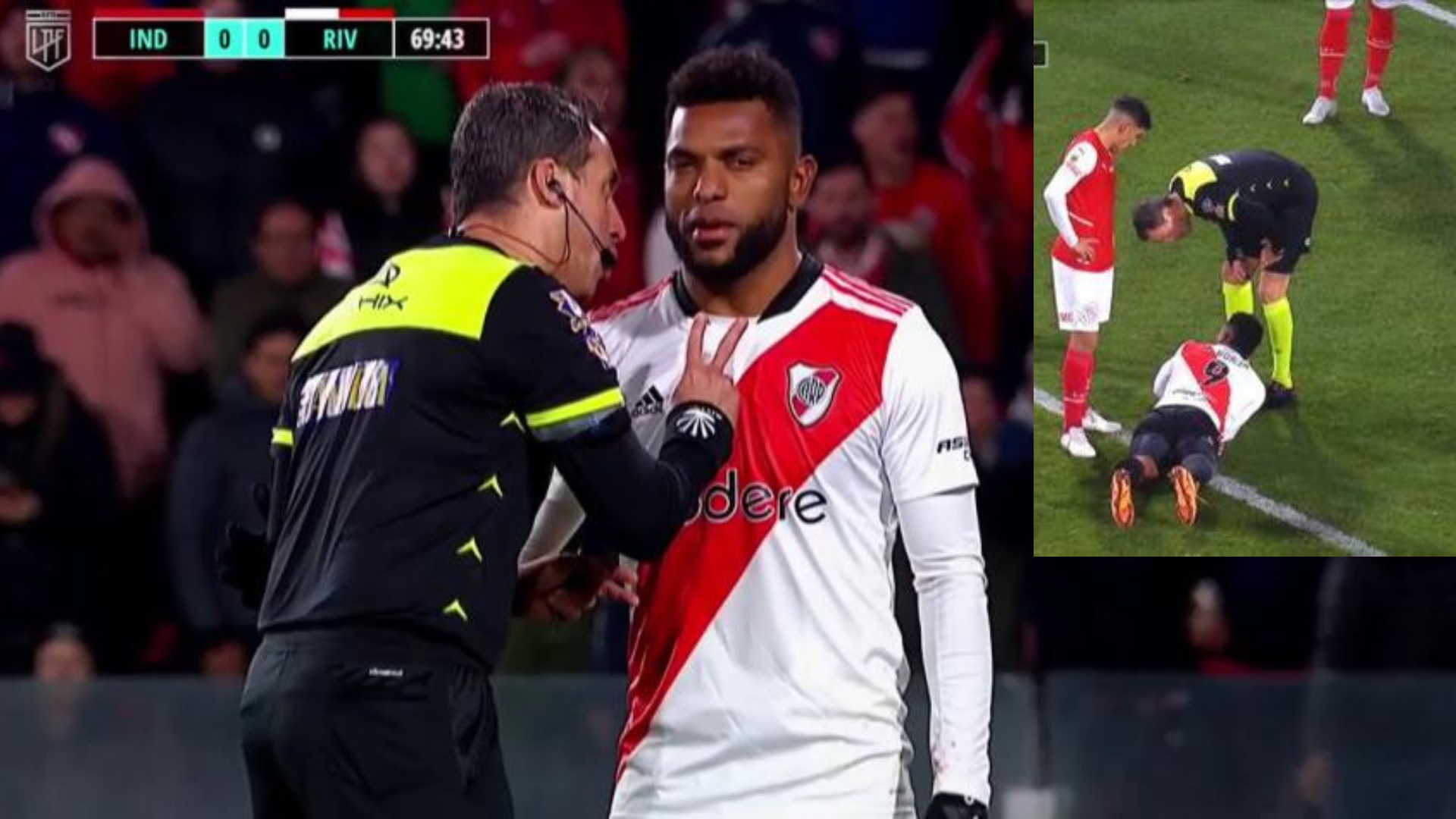 The Colombian Miguel Ángel Borja was attacked in the area vs. Independent, but the central referee decided not to sanction a penalty, nor to expel the aggressor. Image: ESPN.

For the twelfth date of the Argentine Professional Football League, Club Atlético Independiente received River Plate in its place, which needed to get rid of the most recent defeat they had suffered against Sarmiento at the Monumental Stadium by 1-2. With the Colombians Juan Fernando Quintero and Miguel Ángel Borja on the bench, those led by Marcelo Gallardo took to the field of play with the idea of ​​controlling the match, but the development would be completely different.

Independiente, with the character of ‘respecting the house’, took control of the game during the first half and had a couple of close approaches to the goal protected by Franco Armani, especially striker Leonardo Benegas, who was a few centimeters away from opening the scoring against favor of the Reds.

In the first 45 minutes the main actor of the controversy would also be present for the closing of the match, the blows and aggressive tackles. 18 fouls sanctioned and a yellow card to Pablo Solari (River), was what left the first part in this aspect, apart from the leading role of the central referee Fernando Rapallini, who would be under the criticism of all the fans of the Millionaire later in the meeting. Both teams went into the break without the opportunity to create good football and frustrated by the constant stoppages of play.

In the second half, at minute 60, Gallardo decided to make two changes to try to change the rhythm of the game. One of them was the entry of Colombian striker Miguel Ángel Borja by Lucas Beltrán. Just one minute after Borja entered the pitch, the controversy would break out.

It may interest you: Falcao suffered from the curse: Thomas Tuchel claimed that no Chelsea player wants the number 9

The Colombian made a backwards pass and entered the area to look for the center. At the time of trying to get rid of his mark, the defender Sergio Barreto, Miguel Ángel opened a space using his arm, an action that the Independiente defender did not like, who hit the striker in the face, leaving him on the ground.

The referees located in the VAR room called Rapallini to review the action and make a decision on the matter. In all the angles of the repetitions, the clear aggression of Barreto could be evidenced, for which a penalty and a red card were expected for the center-back.

However, for the referee the action did not represent any type of aggression or dangerous game, so he decided not to charge a penalty and not even show Barreto a yellow card, who ended up getting away with it. Such was the surprise of the players of The Cross Band about Rapallini’s decision, which they did not hesitate to protest airily and because of this, it was the goalkeeper Franco Armani who paid the piper seeing the yellow card.

At the end of the meeting, justice was done for those of the Monumental. In added time, at 90+2′, Bruno Zuculini picked up a loose ball outside the area, shot and the rebound fell opportunely to Matías Suárez, who hit the ball as best he could and sent it to save for the final 0-1 to favor of the set Núñez.

Juan Fernando Quintero defended ‘Gio’ Moreno after his departure from Atlético NacionalEx-Tottenham soccer player affirmed that Liverpool makes a mistake seeing Luis Díaz as the replacement for Sadio ManéAt the height of Messi and Lewandowski: this is the new record of Miguel Ángel Borja