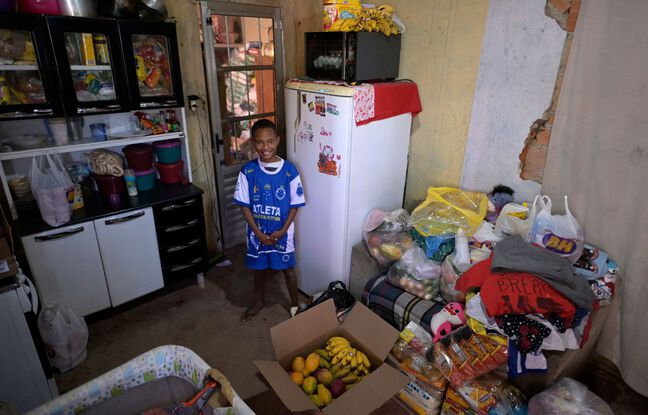 “Mr. Officer, we have nothing to eat at home. These are the words heard by a Brazilian policeman when he answered the emergency number last Tuesday. At the end of the line, Miguel, an 11-year-old child. The officer initially thinks it was a case of domestic neglect. But when he went there, he noticed that it had been three days since the seven members of a family living in an attic in Santa Luzia, near Belo Horizonte (southeast), only feed on corn flour diluted in water.

Célia, 46, is raising six children alone and while inflation eats into the purchasing power of the poorest in the largest economy in Latin America, she can no longer buy enough to feed them.

The police then went to the supermarket to bring food to the family, some paid for out of pocket and the other offered by the manager of the business, to whom they had explained the reason for their presence in the neighborhood. When the local press told this gripping story, the drama of the Barros family moved all of Brazil and donations began to flow.

The kitchen, devoid of any foodstuffs and with a desperately empty refrigerator, has taken on the appearance of a convenience store. “We received a lot of food, lots of different things, even foods I didn’t know,” said young Miguel, opening a full cupboard.

Hunger has again become a major problem in Brazil

“We suffered a lot. Hunger hurts so much, I will never forget those moments,” sighs Célia, who survived thanks to odd jobs, but found herself idle during the Covid-19 crisis. “After a while, you don’t even have the strength to get up. Miguel saw me in despair, in tears, and decided to act. Thank goodness that changed everything. »

The plight of this family has had a particular echo in a country where hunger has once again become a major problem, having been virtually eradicated in the last decade. For the first time since 2014, Brazil reappeared this year on the UN “World Hunger Map”, with 28.9% of the population living in a state of moderate or severe “food insecurity”. Images showing starving people fighting over bones in dumpsters are increasingly spreading on social media.