This weekend Halina Reijns went Bodies Bodies Bodies (2022) premiered in the United States and immediately shot to the top of film production and distribution company A24. The film is currently the second highest grossing A24 film of the year.

Bodies Bodies Bodies is na Everything Everywhere All at Once (2022) the most visited cinema film of the famous company A24. Last weekend, Reijn’s film grossed no less than $226,526 during screenings in New York and Los Angeles. In both cities there was a lot of enthusiasm for the screening and the tickets were sold out. Starting next week, the film will be shown in about 1,200 cinemas across the United States. In the Netherlands we will have to wait another month before we can admire Reijn’s work.

Bodies Bodies Bodies is about a group of wealthy twenty-somethings who throw a big party in a remote family home. Games are played, one of which has a fatal outcome. What starts out as a banger ends in a murder mystery.

Viewers and critics alike seem to be excited about the murder mystery. Currently critics rate the film 91%, audiences rate it 80% on Rotten Tomatoes. 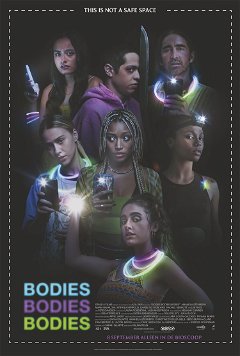 When a group of wealthy twenty-somethings arrive at a remote mansion for a party during a hurricane, a game spirals out of control.