“For four months, I struggled to answer this question: are you okay? Now that she is in kyiv, the war in Ukraine seems less frightening to Iryna Tuz than when she followed it from Toulouse, where this former journalist is based. Now president of the Ukraine Libre association in Toulouse, Iryna has gone to find her family for a few weeks. “It’s difficult to live in peace when your friends are in a state of war”, confides the one who is now with her family and whose “level of concern is lower”.

At 20 Minutes, Iryna Tuz recounts the confidence of the Ukrainian people, these lives suspended by war and the relief of having found her loved ones safe and sound after a long journey. Because to reach kyiv, Iryna chose to go through Budapest (Hungary). This is where she will take a “marshroutka”, a minibus that can carry less than ten people, and cross the border. And to be surprised by the presence of a “young boy” at his side: the law prohibits all men aged 18 to 60 from leaving the country, because of the general mobilization. Is he at risk of being stopped at the border? In reality, he is “a very positive soldier”, back “from training in Slovenia”. Like the young man, up to 10,000 Ukrainian soldiers could be formed before the end of the year in the United Kingdom.

If all goes well at the border for Iryna and her traveling companions, the path to Lviv is more uncertain: “There are a lot of checks once in Ukraine, the soldiers check the papers of all the men, the drivers too. “The checkpoints follow one another and when it is necessary to cross a river “there is surveillance on each side”. Before finally being able to take a train to Lviv, Iryna had to change buses several times, and even resort to hitchhiking to return to where she had forgotten her computer, fearing that the postal services could not deliver her. . “And then, guess who’s coming? A New Post truck! “, she is still surprised.

Between tourists and refugees

Ukraine is still well and truly on its feet, and determined to show that it is, especially in the West. During her few days in Lviv, Iryna attended the funeral of two soldiers: “the whole administration was present, even the mayor. Although bombarded a few times since the beginning of the war, Lviv remains far from the front and shows a welcoming face. “There are quite a few tourists,” notes Iryna, although a number of them are not there of their own free will.

The young woman thus lived for a moment, both short and infinite, “in the middle of nowhere with displaced people from Kharkiv”. “During an air alert, the gas station was no longer delivering diesel, so we stayed sheltered,” she says, noting that “everyone was calm”. These refugees must have already had their share of anguish: under Russian fire for weeks, this Russian-speaking bastion has held firm since the start of the war, a few kilometers from the border. The second largest city in Ukraine, 30% of whose homes were destroyed, had 1.4 million inhabitants before the war. At the end of March, a third had already fled to the West, and the mayor now estimates the number of homeless at 150,000.

In kyiv, Iryna also comes across tourists: “Poles, French, a couple of Germans, and even an Australian where I volunteered. » President of the association Free Ukraine in Toulouse, the ex-journalist did not come back just to see his family: “In a war hospital center, equipped for the evacuation of the wounded and first aid, I helped sort the stock. “Blankets, medicines, rations, etc., everything passes through his hands. And those of other Kievans willing to help.

“The volunteers are mostly women, one of them even wanted to join the army. But she was turned down because she had no military experience,” says Iryna. The role of women in Ukrainian defense remains ambiguous. “If there are girls in uniform” in the street, female soldiers remain rare, the defense of the territory remaining the prerogative of men. But “from October 1, the mobilization will expand, the conditions will be relaxed”, underlines Iryna. In the meantime, kyiv does not forget to use some female faces as a symbol of the resistance of its people, like Julia Paievska.

“We do it for you”, when the soldiers decline the donations

However, it is difficult to find a Ukrainian woman criticizing the army. “Here the vision of the army has changed, they are called ‘the defenders of Ukraine'”, explains Iryna. Exit the image of “aggressiveness” of the soldier. “We were even hesitant to make a donation to the army” in one of the many collection boxes provided for this purpose “rather than having a coffee, but soldiers told us” we do it for you, have your coffee “”, says the young woman who has finally just found her mother. 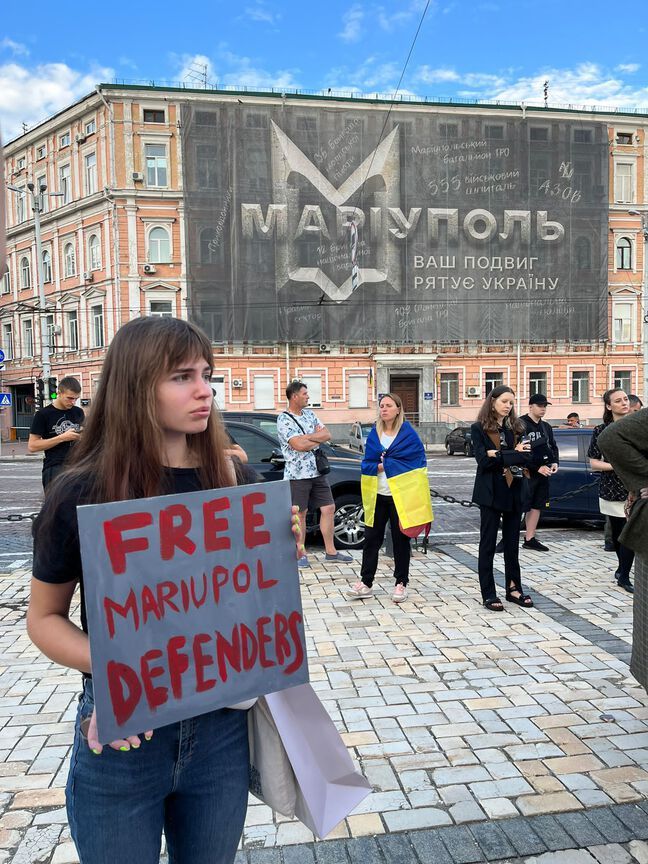 Demonstration in kyiv for the release of prisoners of war from the Azov battalion. – IT/20 Minutes

At the same time, on the square of the Sainte-Sophie cathedral, other women are demonstrating. Placards in hand, they tirelessly repeat a “They are heroes” (“they are heroes”) perfectly audible on the phone, and addressed “to foreign journalists” present in kyiv. A few days after the bombing of Olenivka prison, “they want to obtain the release of the men of the Azov battalion”, explains Iryna to 20 Minutes. 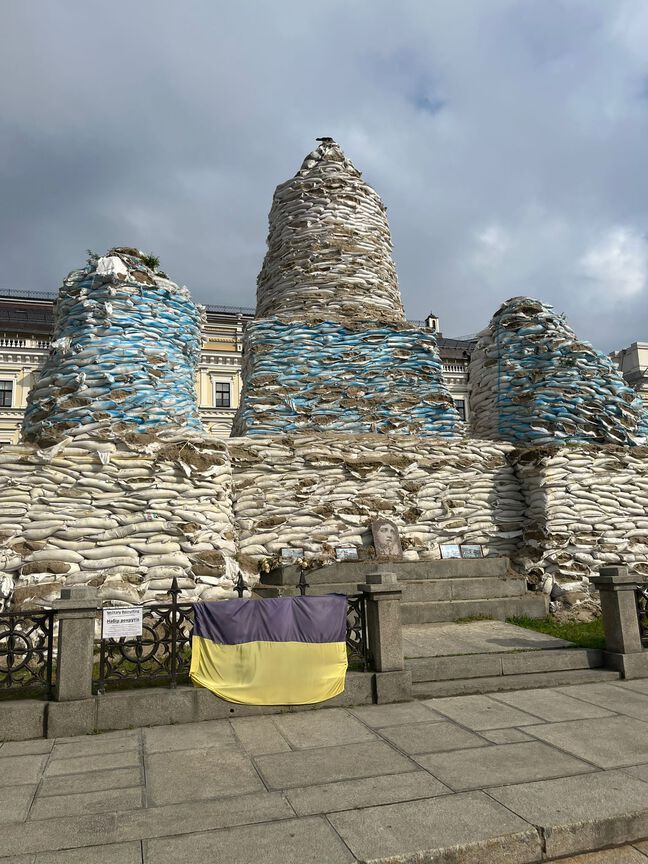 Statues protected by sandbags in kyiv. – IT/20 Minutes

Far from the front, kyiv bears the scars of war. “All the monuments of Ukrainian culture are protected, surrounded by sandbags, but not those dating from the USSR,” notes Iryna. For the moment, these protections are not put to the test: in one week, Iryna experienced three aerial alerts. All have, according to her, been welcomed as a banal event of everyday life.

A daily life of yellow and blue. “The colors of the Ukrainian flag are visible everywhere, the cafes are decorated with small garlands for example”, explains Iryna. Tags, flags on the windows, icing on the cakes, the inhabitants compete in originality to display the colors of Ukraine, a sign of a kyiv where “life has resumed, where people go to coffee”. And this even if, as Iryna’s mother laments, “the prices have increased a lot”, especially those of food. 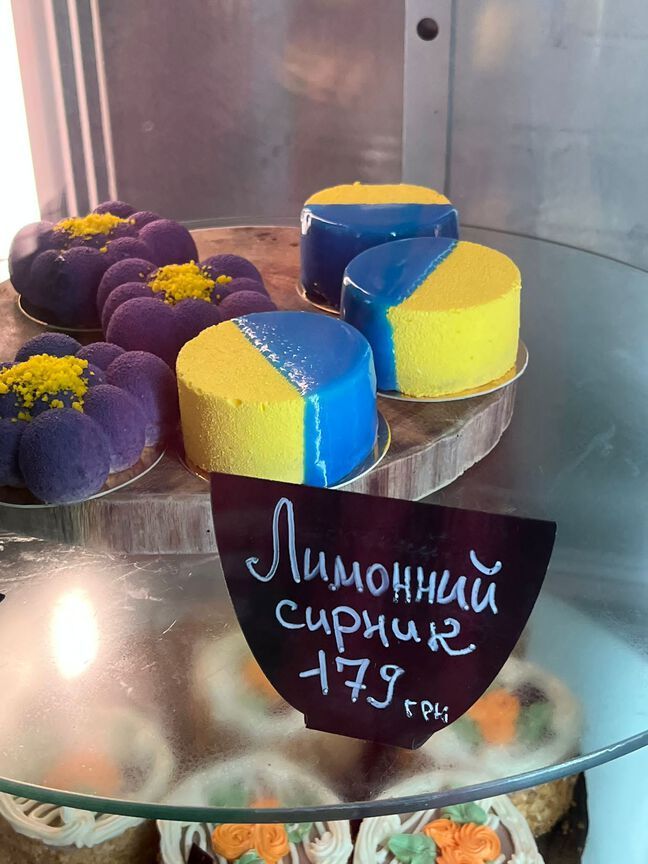 Pastries in the colors of Ukraine, in kyiv. – IT/20 Minutes

However, kyiv was the scene of fierce fighting at the start of the war. The city center was “spared”, but “the reconstruction of the affected neighborhoods has not yet begun”. Passing through her native district, Iryna was even surprised to be “chased away” by a resident: “There is a kind of civic defense, they prevent taking pictures of the rubble. »

A people between trust and stoicism

There is “no memory of the dead, no collective mourning yet” in Ukraine, adds Iryna. The portraits of the dead are posted on social networks, but that’s it. The victims of Boucha gave way to those of Mariupol, then to those of Severodonetsk. Caught up in the frenzy of war, Ukraine is struggling to keep up with the growing human toll. If more than 10,000 soldiers are said to have died according to the authorities, the overall toll of civilian victims remains impossible to hold. The Attorney General’s Office has announced that it is investigating the deaths of 361 children, while areas controlled by Russia escape any count. To remember, the war will have to be over.

In the meantime, the population remains “mobilized”. “People are calm but serious, war is in every conversation,” portrays Iryna. A fear inhabits his mother and the inhabitants of kyiv: “that Belarus will not leave the northern front alone”. Russia’s ally, the rear base of the February 24 invasion, notably launched a military exercise near the border in early May, and Vladimir Putin announced his intention to place nuclear-capable missiles there.

But not enough to undermine the morale of the Ukrainians. Even if certain doubts infuse, under the effect of a Russian information war “which begins to work”, Iryna observes around her an “impressive confidence”. Far from blissful optimism, the Ukrainians are sure of one thing: their country is going to win.