Local authorities in Matanzas reported that a second oil tank collapsed during midnight on Sunday, where Cuban firefighters have been battling a gigantic fire for two days, which has left one dead and 16 missing.

“Tank number 2 has just collapsed, it is not yet specified if the lid of tank 3 was thrown off with the explosion,” at the supertanker fuel base, the provincial government of People’s Power of Matanzas reported on its Facebook page. a city 105 kilometers from Havana. 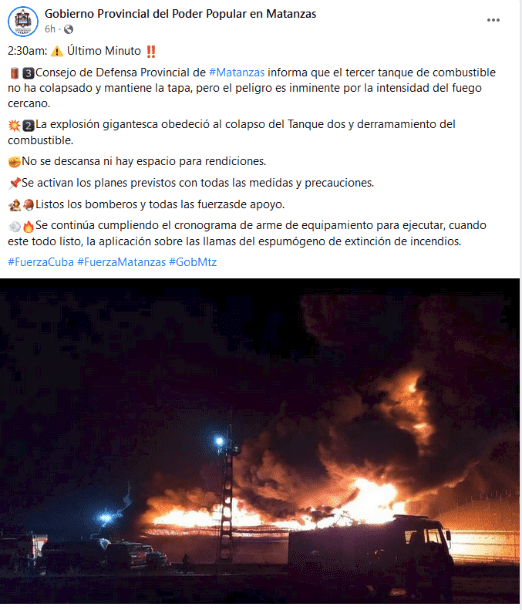 The large-scale incident began on Friday at 7:00 p.m. local time when lightning struck a tankwhich is part of a fuel storage plant in which there were a total of eight huge tanks.

The Cuban presidency confirmed that it is “an oil spill from the second tank” and that the third has not collapsed.

The two damaged tanks were together and the authorities have feared since Saturday that the fire will spread to a third tank.

Faced with this risk, “the forces that worked in the place had been evacuated” on Sunday night, said the provincial government of Matanzas.

According to the last medical report, released before the collapse, the balance is one dead, while 24 people remain hospitalized, five of them in critical condition.

The 16 people reported missing are “firefighters who were in the area closest” to the fire, the presidency reported Saturday.

The body of firefighter Juan Carlos Santana, 60, located on Saturday, was buried this Sunday with honors in his native town of Rodas, in the neighboring province of Cienfuegos.

Relatives of the disappeared met with President Miguel Díaz-Canel in a central hotel in Matanzas, where they are assisted by doctors and psychologists in their anguished wait.

“My son did his duty, he took a step forward,” the mother of a 19-year-old firefighter who was at the supertanker base early Saturday morning when the fire started in the second tank told AFP in tears. made out of fuel.

Authorities coordinated on Sunday with brigade officials from Mexico and Venezuela who arrived on Saturday night to help put out the fire.

Four Mexican planes and one Venezuelan plane landed at the airport of the famous resort of Varadero, about 40 kilometers northeast of Matanzas. The first plane of the Mexican Air Force arrived with 60 soldiers and 16 technicians from Petróleos Mexicanos (Pemex), followed by another with equipment and chemical products for fire control. 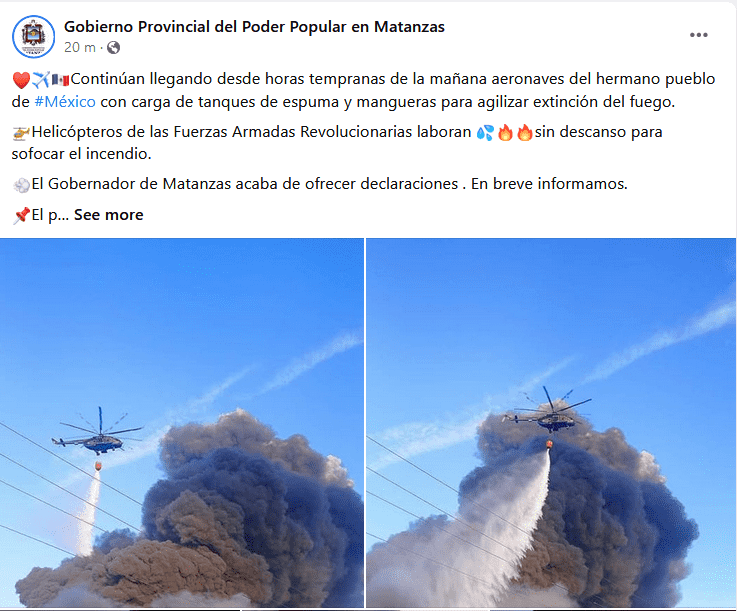 In the early hours of the morning another flight arrived from Venezuela with 35 firefighters, specialists and technicians from Petróleos de Venezuela (PDVSA), who transported 20 tons of foam and other chemicals.

“The help is important, I think it will be decisive,” Díaz-Canel told the press.

The immense column of smoke that had extended to Havana since Friday had begun to subside on Sunday afternoonbefore the collapse of tank two.

From an aid post, located about 150 meters from the super tanker base, the group of volunteers from the local Red Cross was waiting, and the fire trucks were constantly leaving towards the area of ​​the fire.