Brittany, Isère, Dordogne… We take stock of the fires in progress in France 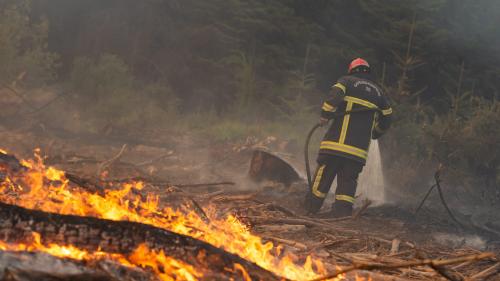 Forest fires broke out in Morbihan, Finistère, lsère and Dordogne this weekend. All the fires are not yet under control, Monday August 8 in the morning. Hundreds of firefighters are still on the ground and air resources are ready to intervene. We take stock of the situation.

Two investigations have been opened by the Lorient public prosecutor’s office into the fire at Saint-Philibert as well as those at Erdeven and Locoal-Mendon. The track of a fire started by the use of firecrackers in Saint-Philibert is privileged, reports France Bleu Armorique. Debris was found on the spot and two minors, aged 14 and 16, were heard after going themselves to the gendarmerie.

Elsewhere in Finistère, the few fires that reignited on the Monts d’Arrée on Saturday afternoon are fixed, two weeks after the fires that destroyed nearly 1,800 hectares of vegetation in the same place. But the mayor of Saint Rivoal, guest of franceinfo this Monday morning, fears “the combination between high temperatures and rising wind”.

LIVE Fires in Finistère ➡️ “The situation has not changed overnight”, says Mickaël Toulec, mayor of Saint Rivoal in Finistère, who fears “the combination of high temperatures and rising wind”. “200 to 300 hectares” have burned in recent days. pic.twitter.com/s5PsaC7Uc4

The Chartreuse massif on fire in Isère, 200 people evacuated

A fire has been underway in the foothills of the Chartreuse since Friday, after a lightning strike, reports France Bleu Isère. The flames, which covered about fifty hectares of forest, descended in less than an hour in the night from Saturday to Sunday towards the departmental 1075, pushed by the violent winds.

Hundreds of firefighters were mobilised. Four Canadair and two planes “to disperse the retardant product will be mobilized, and a reconnaissance plane arrives in the area”, announced the prefecture of Isère, Sunday, while the area, very steep, is difficult to access firefighters.

The inhabitants of several hamlets, in the municipalities of Voreppe and La Sure-en-Chartreuse, were “invited to evacuate”. The mayor of Voreppe, Luc Rémond, clarified on franceinfo that “two districts” of his town, located “300 or 400 meters” from the flames, were evacuated as a precaution. This represents “200 people”.

Two fires set in the Dordogne

The two fires, which broke out late Sunday afternoon in the Dordogne, are now fixed, learned France Bleu Périgord with the Dordogne prefecture. In total, 110 hectares of the Double pine and coniferous forest were destroyed. In La Roche-Chalais, where the biggest fire takes place, a hundred firefighters remain on site this Monday, according to Mayor Jean Michel Sautreau.