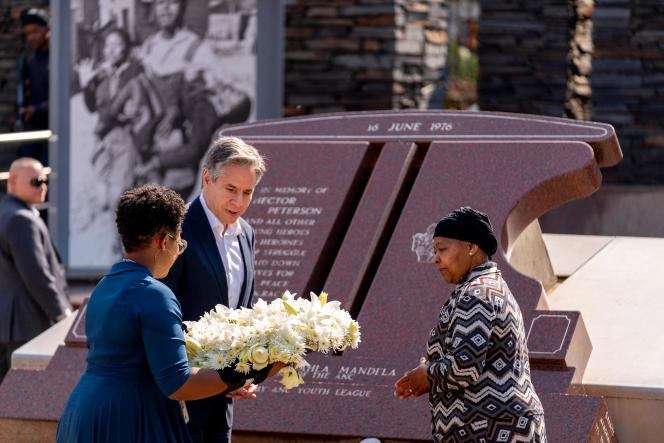 US Secretary of State Antony Blinken began an African tour via South Africa on Sunday August 7 to try to bring the diplomacy of this country closer to the Western camp. This trip, which will then take him to the Democratic Republic of Congo (DRC) and Rwanda until Thursday, aims in particular to thwart Russian influence on the African continent.

It follows shortly after the visit to Africa at the end of July by Russian Foreign Minister Sergei Lavrov, who passed through Congo-Brazzaville, Uganda, Egypt and Ethiopia.

Read also: In Marrakech, the United States says it wants to mobilize “billions of dollars” for Africa

For his first stop, Mr. Blinken chose to stop in South Africa, a country which, since the beginning of the Russian invasion of Ukraine on February 24, has adopted a neutral position and refused to join Western calls for condemn Moscow.

On Monday, Blinken is due to speak with South African Foreign Minister Naledi Pandor on “recent and ongoing developments in the global geopolitical situation”, and make announcements regarding the US government’s new Africa strategy, a Pretoria said in a statement.

On Sunday, the American secretary of state first went to the Hector Pieterson memorial in Soweto, near Johannesburg, a stopover for many heads of state on official visits. He visited the museum built in tribute to the students killed in a demonstration of high school and college students in 1976 during a police crackdown that shocked far beyond the country and was a turning point in the fight against the South African system of education. apartheid, discriminating against the black majority of the country and finally abolished in 1991.

Mr. Blinken was accompanied by Antoinette Sithole, the sister of Hector Pieterson, who, at the age of 12, was the first killed, on June 16, 1976, among more than 170 demonstrators victims of Soweto. The youth had risen up against the obligation to study in Afrikaans, the language of the regime of the white minority in power.

According to Fonteh Akum, head of the Institute for Security Studies think tank, based in Pretoria, Antony Blinken’s visit aims in particular to “bring South Africa closer to the Western camp” within the framework of the new African strategy of the United States. .

Read also: In South Africa, hunt for illegal minors after a gang rape

South Africa has never digested NATO’s military intervention in Libya in 2011. She had her arm twisted to approve it when she sat on the UN Security Council, before to criticize this war and accuse Westerners of having abused this mandate to bring down Colonel Muammar Gaddafi.

Historically, the ANC in power in South Africa since the advent of democracy in 1994, has been close to the Soviet bloc which supported emancipation struggles in the world.

Since 2011, the country has been a member of the BRICS diplomatic group of emerging economies, bringing together Brazil, Russia, India and China, which at one time operated assiduously with one to two annual meetings, which had contributed to consolidate ties. In June, Russian President Vladimir Putin urged the Brics to cooperate in the face of “selfish actions” by Western countries, amid unprecedented sanctions against Moscow over the Ukraine conflict.

Mr. Blinken intends during his tour to show African countries that they “are crucial allies on the most burning issues of our time” such as “the fight against the effects of climate change, food insecurity and global pandemics”. , had indicated at the end of July the State Department.

After Johannesburg, Mr. Blinken must go to the DRC, then to Rwanda, prey to renewed tensions with his Congolese neighbor who accuses him of supporting the rebels of the March 23 Movement (M23), which Kigali denies.

Episode 5 Article reserved for our subscribers In South Africa, the freedom fighters immortalized by Sue Williamson

This is Mr. Blinken’s second trip to sub-Saharan Africa since taking office. In 2021, he had visited Kenya, Nigeria and Senegal.

Prior to the Russian invasion of Ukraine, American diplomacy in Africa focused mainly on competition with China, which has made significant investments in infrastructure on the African continent and which, unlike the United States , did so without asking States for a counterpart on democracy or human rights.