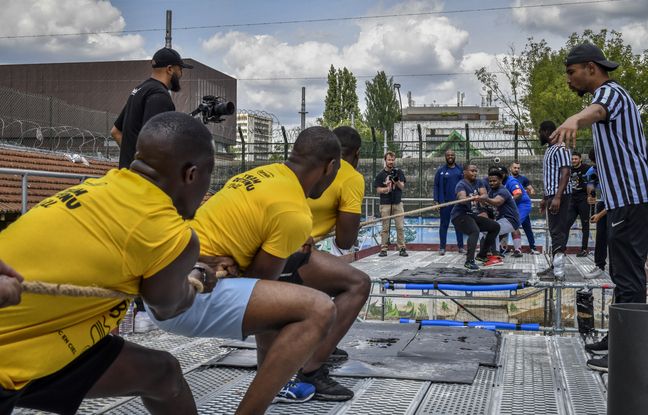 Young people from the estates who compete in karting or in an inmate swimming pool, within the Fresnes prison itself. The meeting is unlikely, halfway between Intervilles and an afternoon at the MJC, the security side in addition. This is the second episode of Kohlantessthe “Koh-Lanta of the cities”, which is due out on Sunday August 14.

This completely daring concept was born in the mind of Djibril Dramé, a great sportsman with a positive spirit who wants to “gather people together” at all costs and loves to have fun. The first episode saw the police and young people from the housing estates clash, in particular from the housing estate of Les Groux, where Djibril Dramé comes from. The “Denis Brogniart of the city”, as he is sometimes called now, renewed the experience in prison this time, thanks to one of his former colleagues who followed the show, and deals with reintegration, Aïcha Baraka, who asked him to join.

A check for 1,700 euros paid to three associations

The idea immediately appealed to Djibril Dramé, to “break the codes and do what people don’t usually do”. “If it can help with the reintegration of inmates and cheer up the hearts of guards, that’s good! This shows that behind we are all human. It’s the same for the episode on the police and the estates. Lots of people from the estates didn’t want to do it against the police. But we have to change mentalities, ”explains Djibril Dramé, who wants above all to “send a message”.

The winners pocket a check for 1,700 euros, which will be shared between three associations: the Relais enfants parents, which promotes the maintenance of the relationship between a child and his detained parent, the Arc-en-ciel association which works in memory of Séverine Fauvarque, supervisor who died in Fresnes, and finally Unitess, an association created a month ago by a close friend of Djibril Dramé, and which shares the same goals as his sidekick.

For the next episodes, this fun-activist intends to attract firefighters and soldiers. “I understand more and more that what I am doing is what the state should be doing,” he told us. To change the image of cities with the general public, but also to change the image that young people have of the cities of the authorities.