Social movements related to the Government will reissue tomorrow a massive march through San Cayetano demanding “land, roof and work” 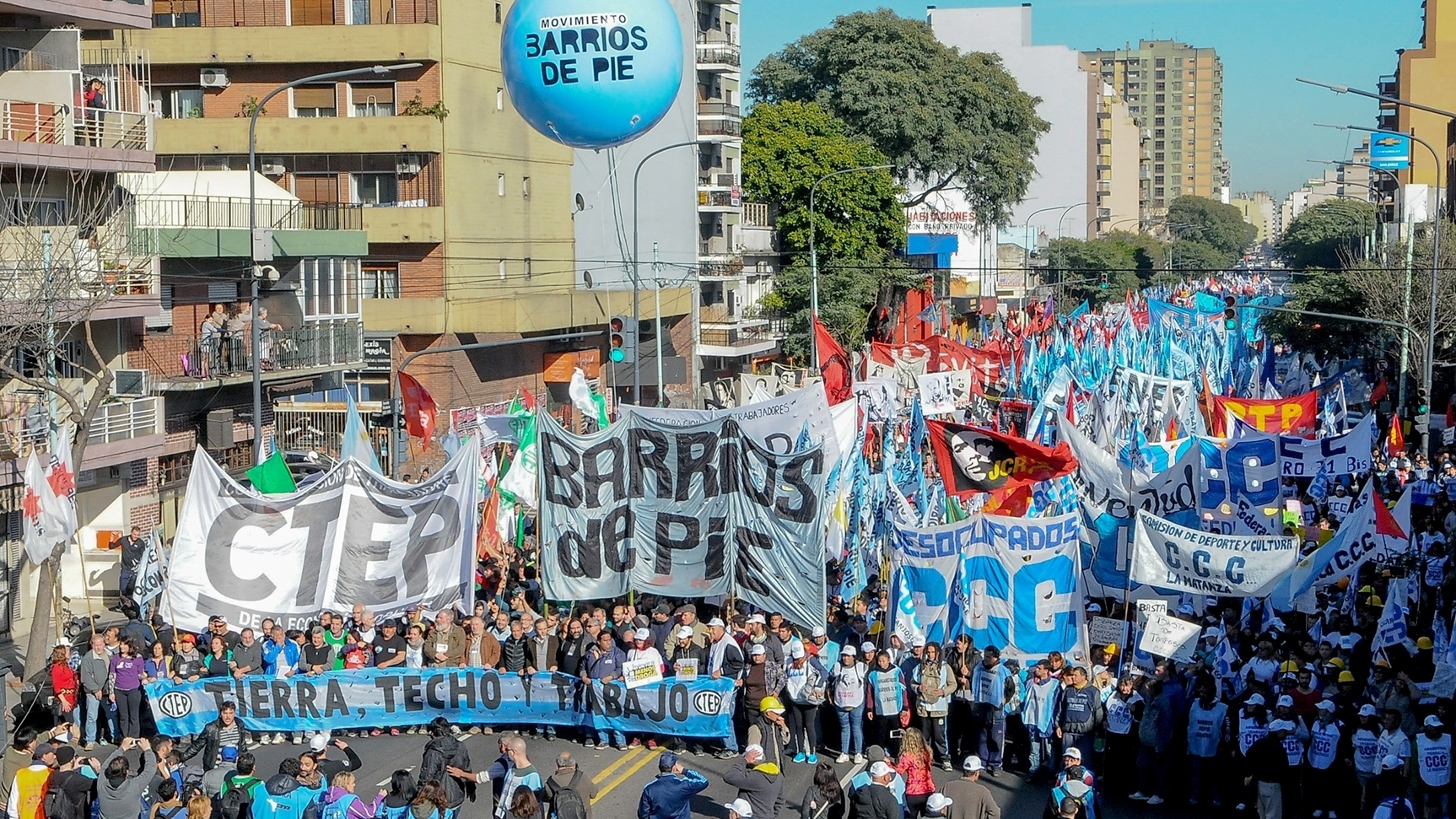 In each celebration for the day of San Cayetano, the main social movements related to the Government, grouped in the Union of Workers and Workers of the Popular Economy (UTEP) mobilize from the Buenos Aires neighborhood of Liniers, where the homonymous Church is located, to demand an agenda of claims for “Land, Roof and Work”. The central call will be reissued again tomorrow, Sunday, starting at 8 in the morning, when a massive column of protesters is directed towards the Obelisk to demand the implementation of measures aimed at informal workers.

The UTEP, the “union” arm of the cartoneros and of those who work in cooperatives of the popular economy —orchard farmers, textile establishments, canteens and snack bars, among others—, brings together leaders with direct influence on the social policy of the Executive Power. Its highest representative is Esteban “Gringo” Castro, the general secretary of the union organization. Under this umbrella come groups such as the Evita Movement, led by Emilio Pérsico and Fernando “Chino” Navarro, the Movement of Excluded Workers (MTE), which has Juan Grabois among its referents, and the Clasista and Combative Current (CCC) led by Juan Carlos Alderete. and the Movimiento Somos Barrios de Pie led by Daniel Menéndez, and the Darío Santillán Popular Front (FPDS) led by Dina Sánchez.

“We have great expectations, there is a lot of energy. San Cayetano is a moment of encounter, we always say that San Cayetano ‘unites us’. It is a journey of several days that will be replicated in almost all the provinces. We are expecting to ratify the ‘Land, Roof and Work’ agenda,” Gildo Onorato, union secretary of the UTEP and leader of the Evita Movement, told Infobae.

The march for San Cayetano began in 2016 during the government of Mauricio Macri. From that alliance, the social movements then baptized as “cayetanos” -because of their closeness to the Catholic Church and their identification with Pope Francis- relied on the religious festival to promote a list of demands related to work and economic activity. among them, the Social Emergency Law that instituted the “Complementary Social Salary”, the immediate antecedent of the “Promote Work” program. 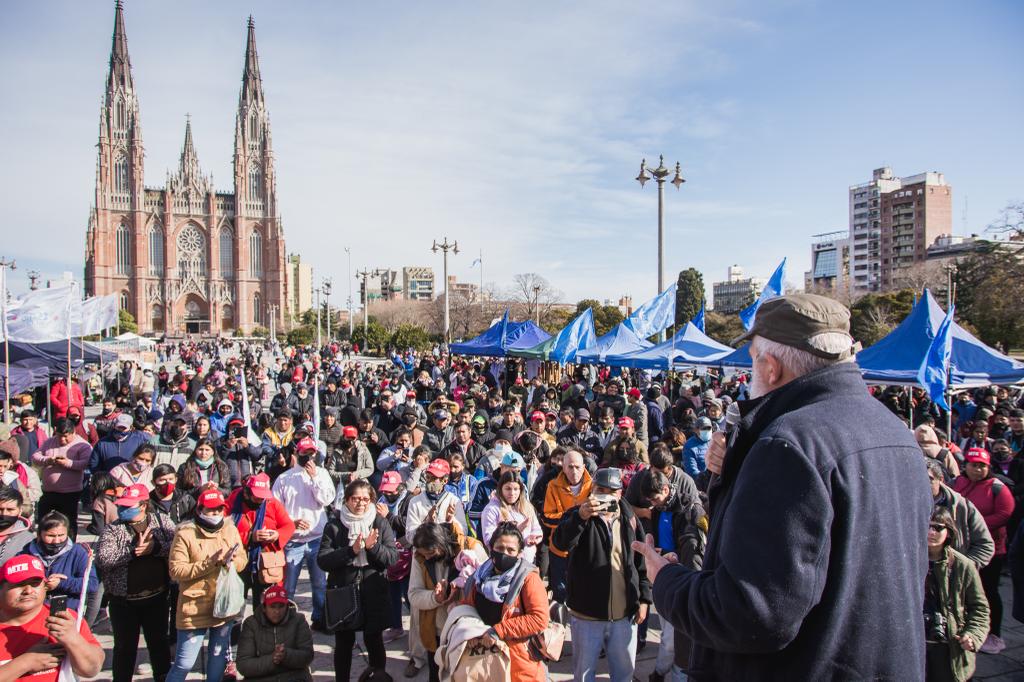 Esteban “Gringo” Castro, from UTEP, during the beginning of the pilgrimage from the Basilica of Luján

In contrast to recent years, the mobilization takes place in a climate of growing impatience and growing claims to the Government due to high inflation, which hits the levels of poverty and indigence of the population. The nervousness due to the deterioration of income exposes the differences in strategies of the social leaders allied to the Front of All, who are deciding how far to tension with the rest of the ruling coalition.

From this sector grouped in the UTEP, the one who represents the most confrontational position is the leader of the Great Fatherland Front, Juan Grabois. This week, his group issued a statement in which he hinted at the idea that the three national deputies Itai Hagman, Natalia Zaracho and Federico Fagioli, together with the legislators Ofelia Fernández (CABA) and Lucía Klug (PBA) could break with the legislative blocs of the Front of All, after the announcements by the Minister of Economy, Sergio Massa, did not include a “redistributive measure” aimed at unregistered workers and “the most neglected social sectors.”

If it advances with the fracture of the Frente de Todos interbloc in the Chamber of Deputies, the ruling party would lose the first minority. However, the legislators of the Great Fatherland Front make it clear that the intention is to set up their own “bench” that does not necessarily imply leaving the bloc. The final decision will be made at a party congress scheduled for next week. 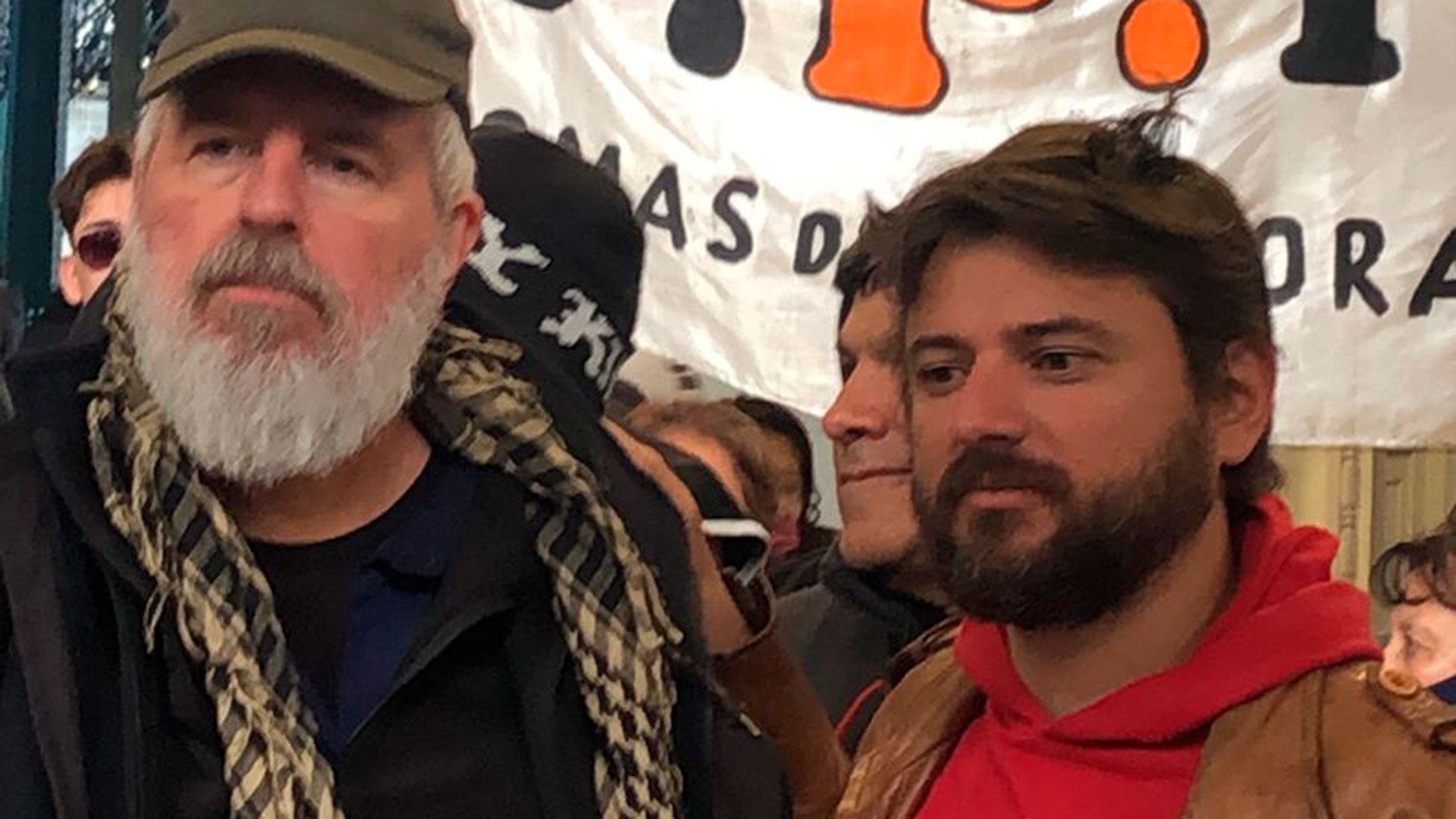 “Gringo” Castro together with Juan Grabois, one of the most confrontational leaders of the social movements aligned with the Frente de Todos

The truth is that, in his latest public statements, the path laid out by Grabois is inclined to “leave” the official factions and deepen the social protest, given the failure of these negotiations with the different interlocutors of the Executive Power. The Great Fatherland Front promotes the sanction of the Universal Basic Salary (SBU), a measure that does not have the support of the entire coalition. The discomfort of this sector deepened due to the lack of advertisements that recompose the income of those who do not have a formal job.

Other UTEP organizations, such as the Darío Santillán Popular Front (FPDS), are also critical of the performance of social policy and support the implementation of a universal income. “We return to the streets in unity, demanding urgent responses for the last and last in line. We put on the table again the Law of Land, Roof and Work, and that it advance with the universal basic salary to end indigence in Argentina. We need urgent answers because the situation can’t stand it anymore.”

Deputy Juan Carlos Alderete, leader of the Revolutionary Communist Party (PCR) and its territorial arm, the Clasista y Combativa Current (CCC), is usually harsh in his speech against the government, but he does not think of divisions in the Frente de Todos. His party has two national deputies. Unlike the Great Fatherland Front, Alderete clarified that he is not considering fracturing and leaving the first minority to Together for Change in the lower house. 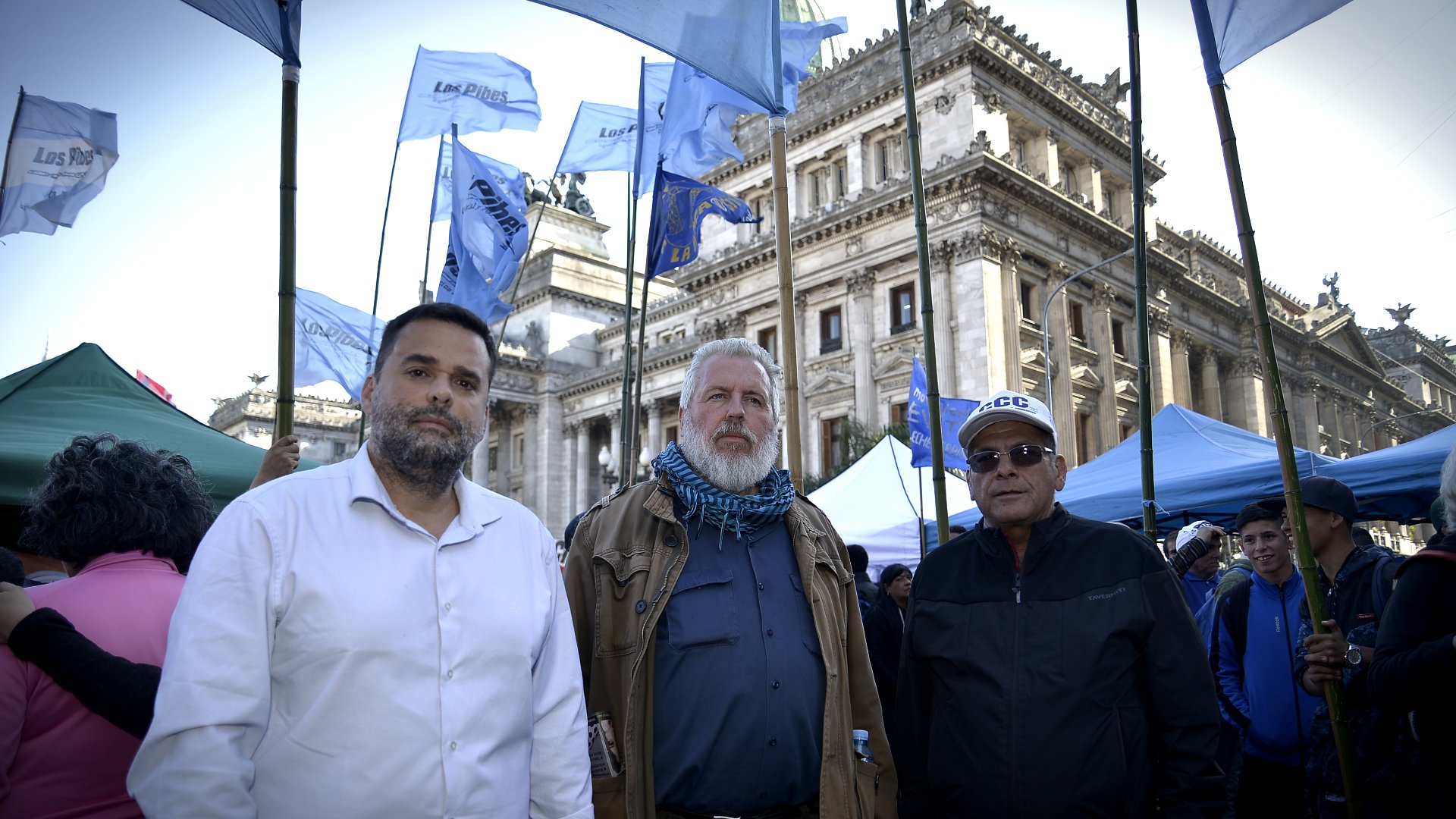 In the Evita Movement, meanwhile, they refrain from fueling the conflict with the Executive Power and President Alberto Fernández, of whom they are direct allies. The secretary of Social Economy, Emilio Pérsico, defined in Radio 10 that “this is not the time for a large distribution of income, it is time to calm the markets.” “Tomorrow is a day of celebration, in which popular religiosity and struggle merge into an embrace that unites and mobilizes, that bets on social peace by conquering the rights that the humblest are demanding,” Onorato considered, with conciliatory rhetoric. .

What unifies all the sectors of the UTEP is the sanction of an omnibus law of “Roof, Land and Work”, which includes different chapters such as the universal basic salary, the productive monotax project, non-bank credits for cooperative members, the Packaging and Wetlands Law, among others. This list of demands will be revealed during the central act, scheduled for 2:00 p.m. on Sunday. From a box located in downtown Buenos Aires, the speakers will be Gildo Onorato, Juan Carlos Alderete, Norma Morales (Barrios de Pie), Dina Sanchez and “Gringo” Castro will close.

During Saturday, the Catholic faithful began to gather around the sanctuary located in Liniers, on Cuzco Street and Rivadavia Avenue, to attend the afternoon mass and come to receive blessings. The militancy will leave from the same meeting point to the intersection of Avenida de Mayo and Avenida 9 de Julio. The organizers expect a pilgrimage of 500,000 demonstrators, which began last Wednesday from the Basilica of Luján.

In this political context, the confessional seasoning will be present throughout the weekend. At 11 o’clock the main mass will be celebrated, which will be presided over by the Archbishop of Buenos Aires, Cardinal Mario Aurelio Poli. In the afternoon, at 5:00 p.m., Bishop Gustavo Carrara, episcopal vicar for the towns and popular neighborhoods of CABA and vice president of Cáritas Argentina, will share another celebration with Father José María “Pepe” Di Paola, parish priest of the San Juan Bosco church. of José León Suárez, in the province of Buenos Aires. Organized by Cáritas, the Great Family Home of Christ and the Union of Parish Clubs, the religious meeting is the kickoff of the traditional pilgrimage throughout the country, which takes a replica of the Virgin of Luján to neighborhood centers with the motto #NiUnPibeMenosPorLaDroga . It is also another activity that has the inspiration of Pope Francis. 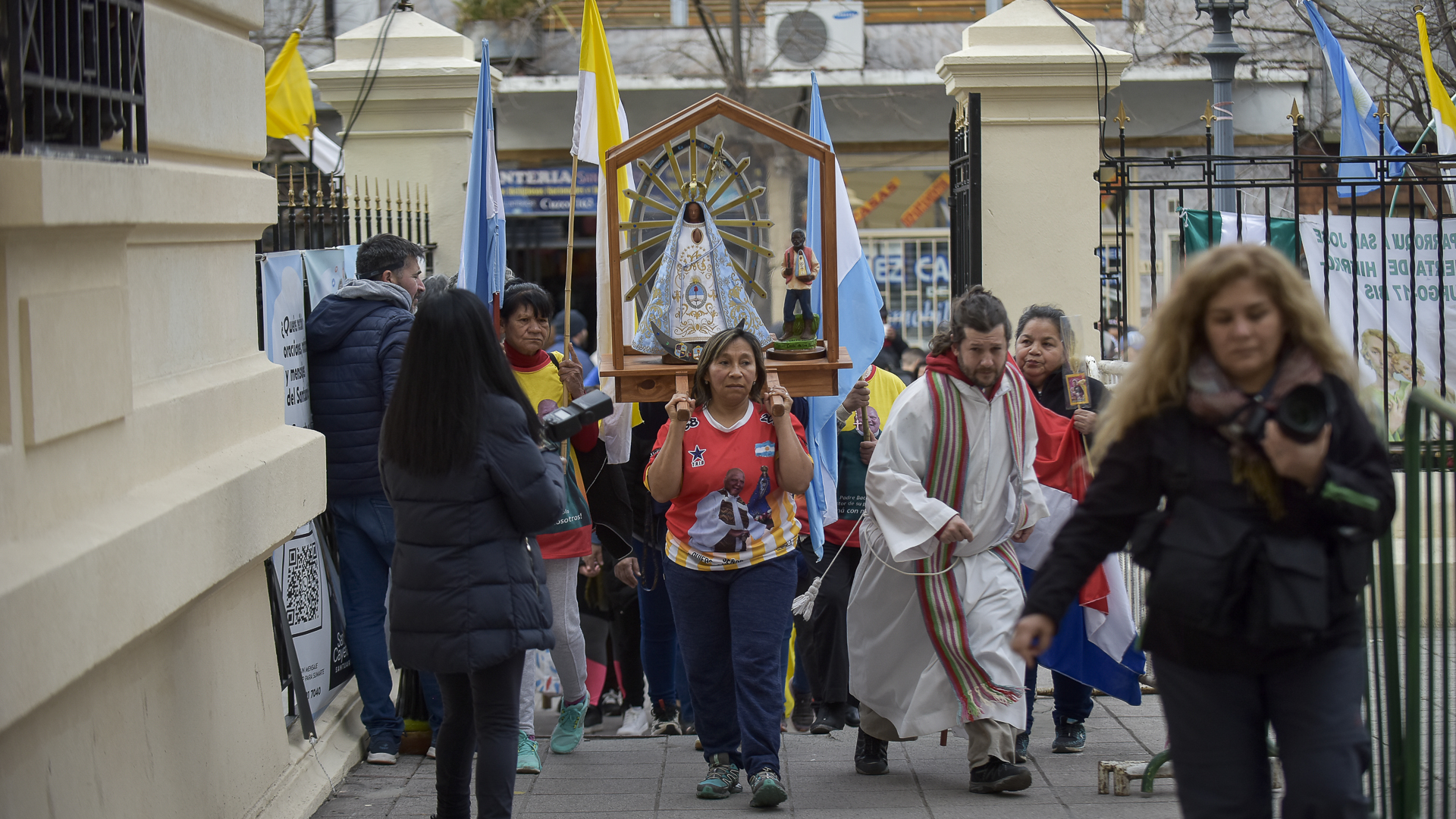 This Saturday, groups of faithful made a pilgrimage to the sanctuary of San Cayetano (Credit: Gustavo Gavotti)

Juan Grabois and his deputies threaten a break with the Government “Gringo” Castro, one of the social referents closest to the Government, asked for “greater ties with the people” Alberto Fernández winks at the Evita Movement: a box of $2,500 million went to the Chief of Cabinet