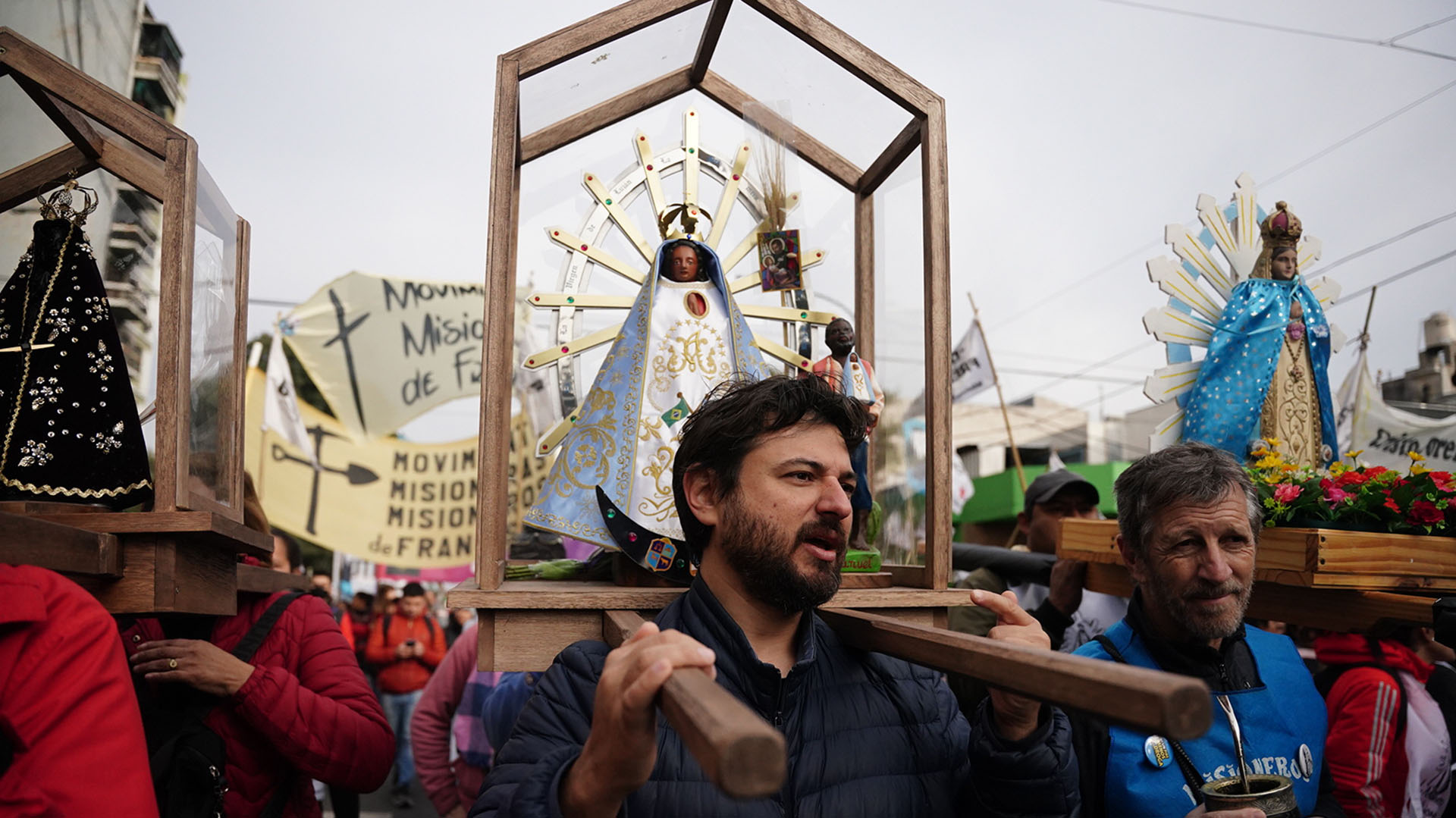 While hundreds of people formed more than seven blocks of queue this afternoon around the parish of San Cayetano, in the Buenos Aires neighborhood of Liniers, social and political organizations that make up the Union of Workers of the Popular Economy (UTEP) held a new edition of the San Cayetano march, from the sanctuary to the intersection of De Mayo and 9 de Julio avenues. 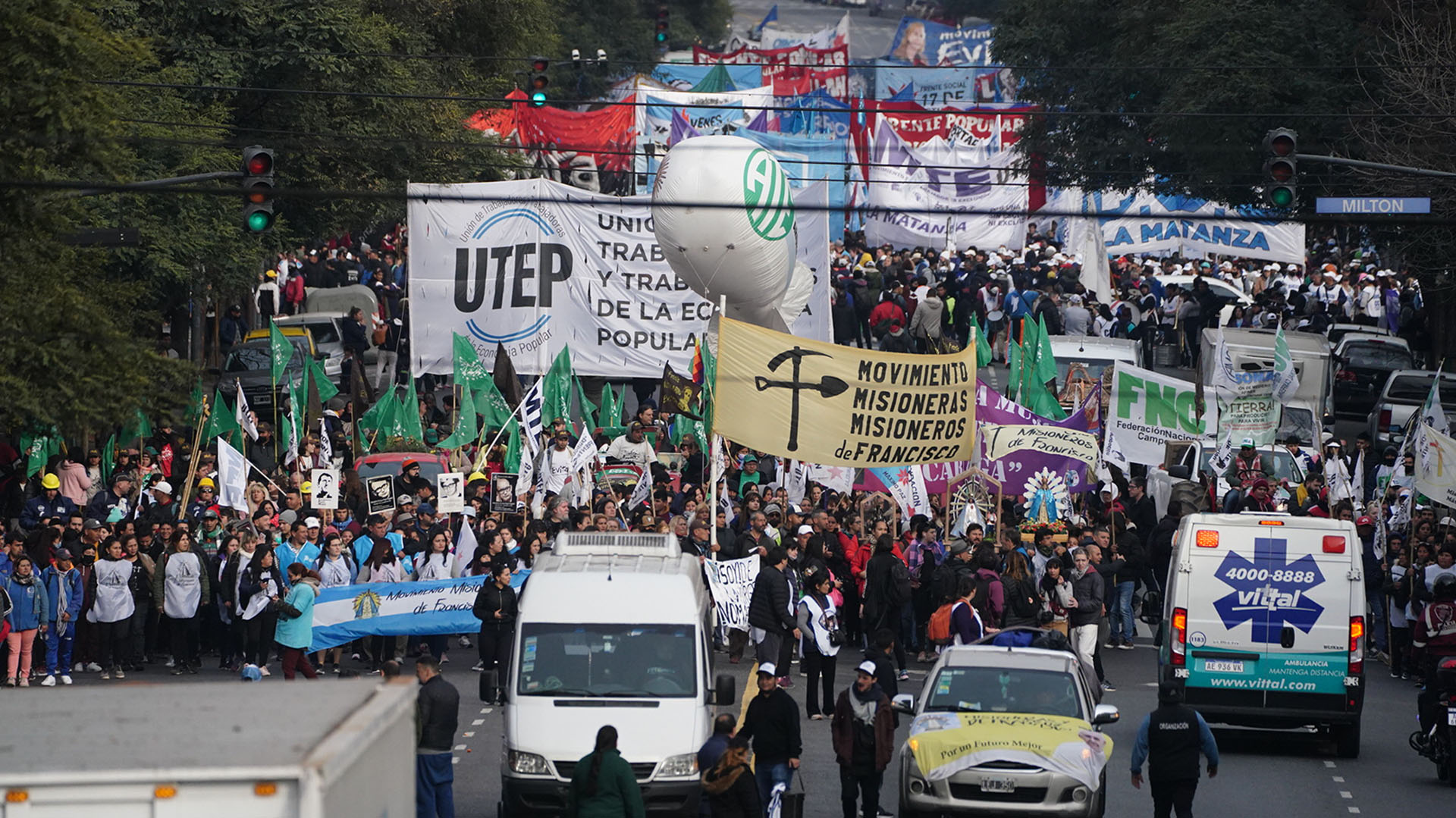 The Clasista and Combative Current (CCC), Somos Barrios de Pie, the Darío Santillán Popular Front, the Evita Movement and the Association of State Workers (ATE) also participate in the mobilization.

Under the slogan “Bread, peace, land, roof and work”, a long column with flags of the UTEP, the Clasista and Combative Current (CCC), Somos Barrios de Pie, the Darío Santillán Popular Front, the Evita Movement and the the Association of State Workers (ATE), among others, gathered at 8 o’clock in Cuzco and Rivadavia and minutes later began the mobilization towards downtown Buenos Aires, generating significant traffic disturbances. 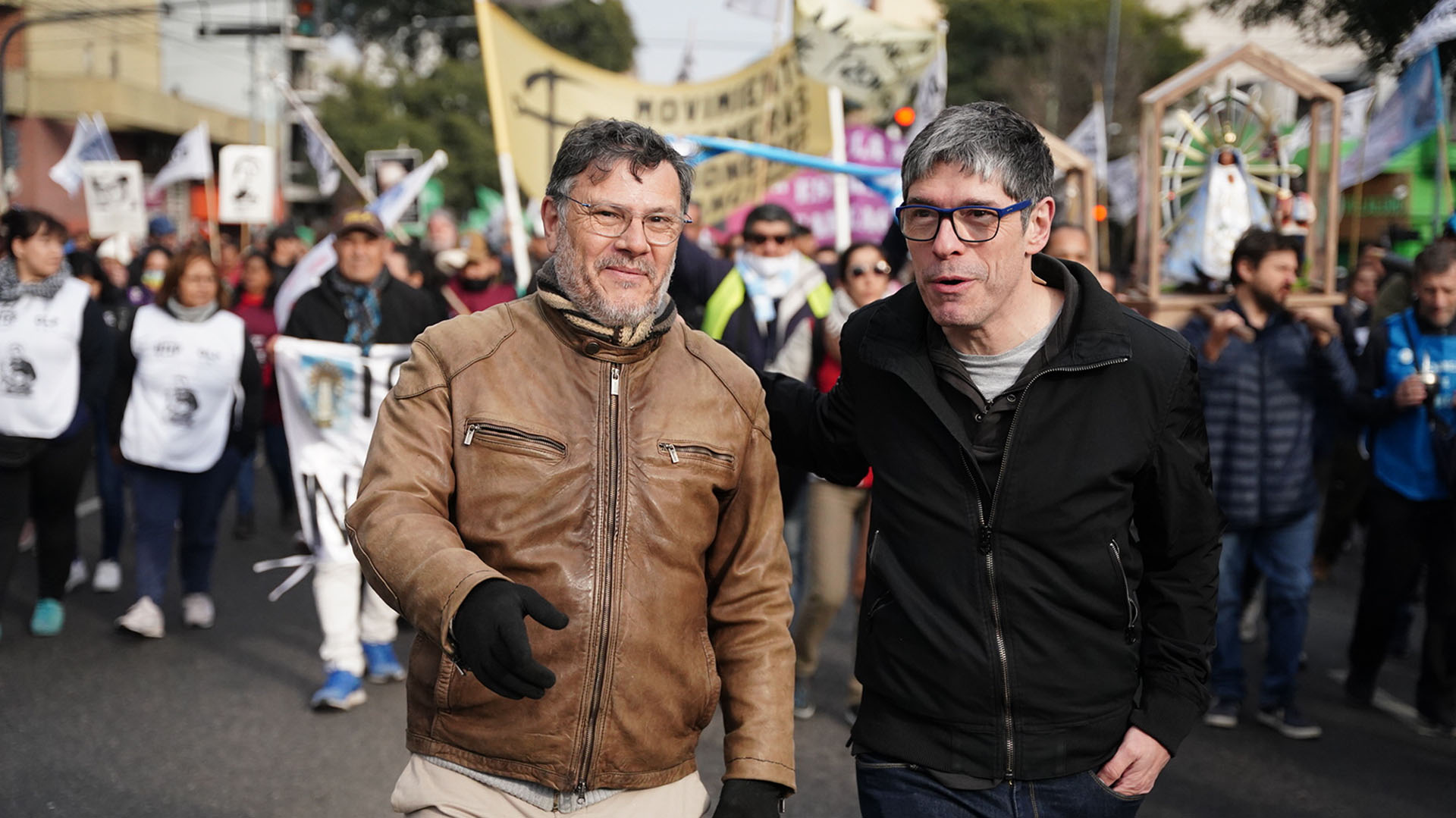 Although some sectors of that organization wanted the mobilization “not to be limited to 9 de Julio” and to extend to Plaza de Mayo, the entity’s secretariat “decided by majority that the march ends at the corner of 9 de Julio and Avenida de Mayo”, where the closing ceremony will take place at 2:30 p.m. 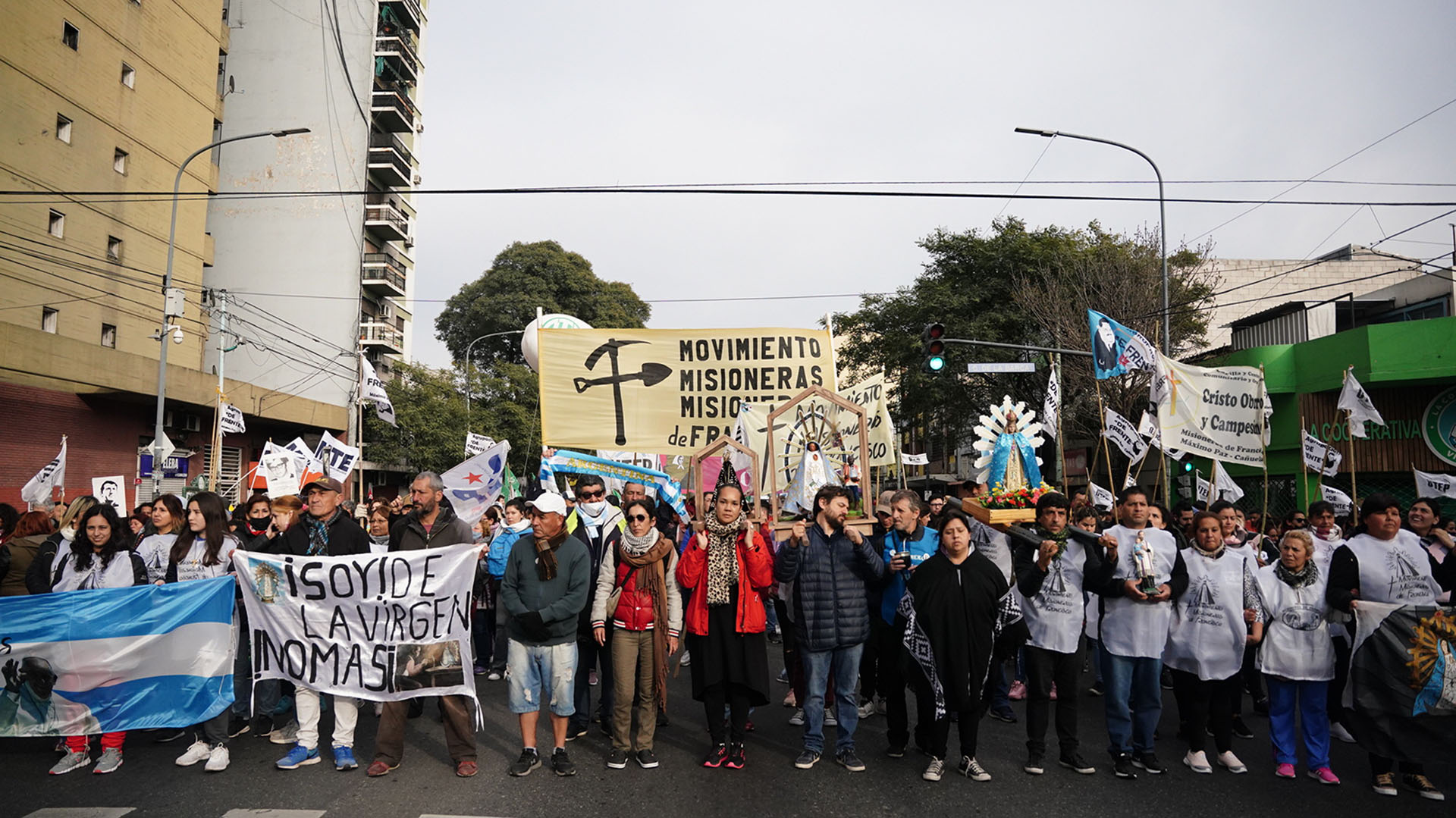 On the other hand, different masses were held to worship San Cayetano, the patron saint of work.

The San Cayetano march began in 2016 -during the Macrista government- and was initially promoted by the Evita Movement, the Clasista and Combative Current (CCC) and the Somos Barrios de Pie Movement, a group of organizations known as “Los Cayetanos”. This year, the mobilization took place again after two years of pandemic, as well as the entry of faithful to the church of San Cayetano. 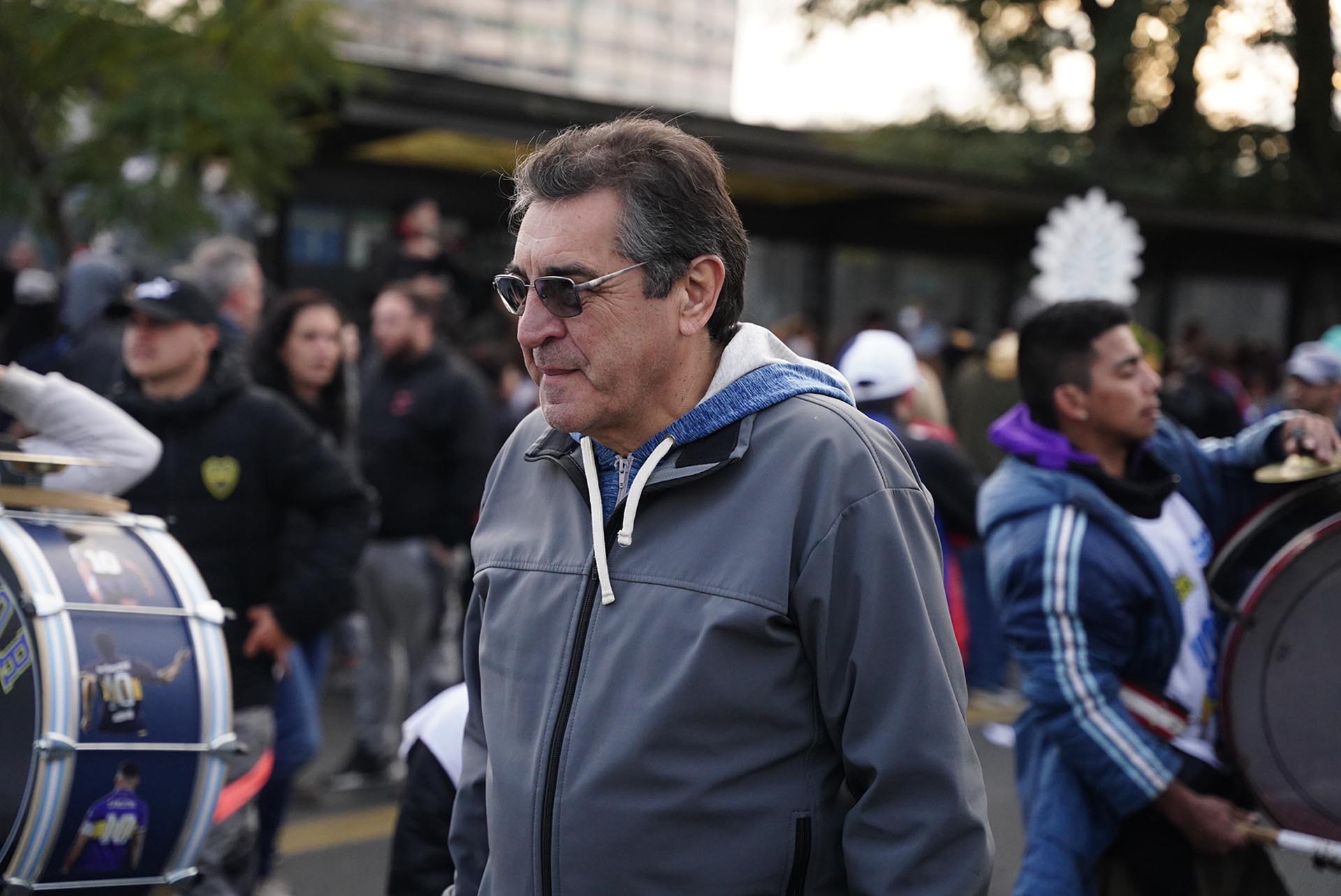 The various social organizations demand improvements and new measures from the government that allow society to reach the most vulnerable sectors. 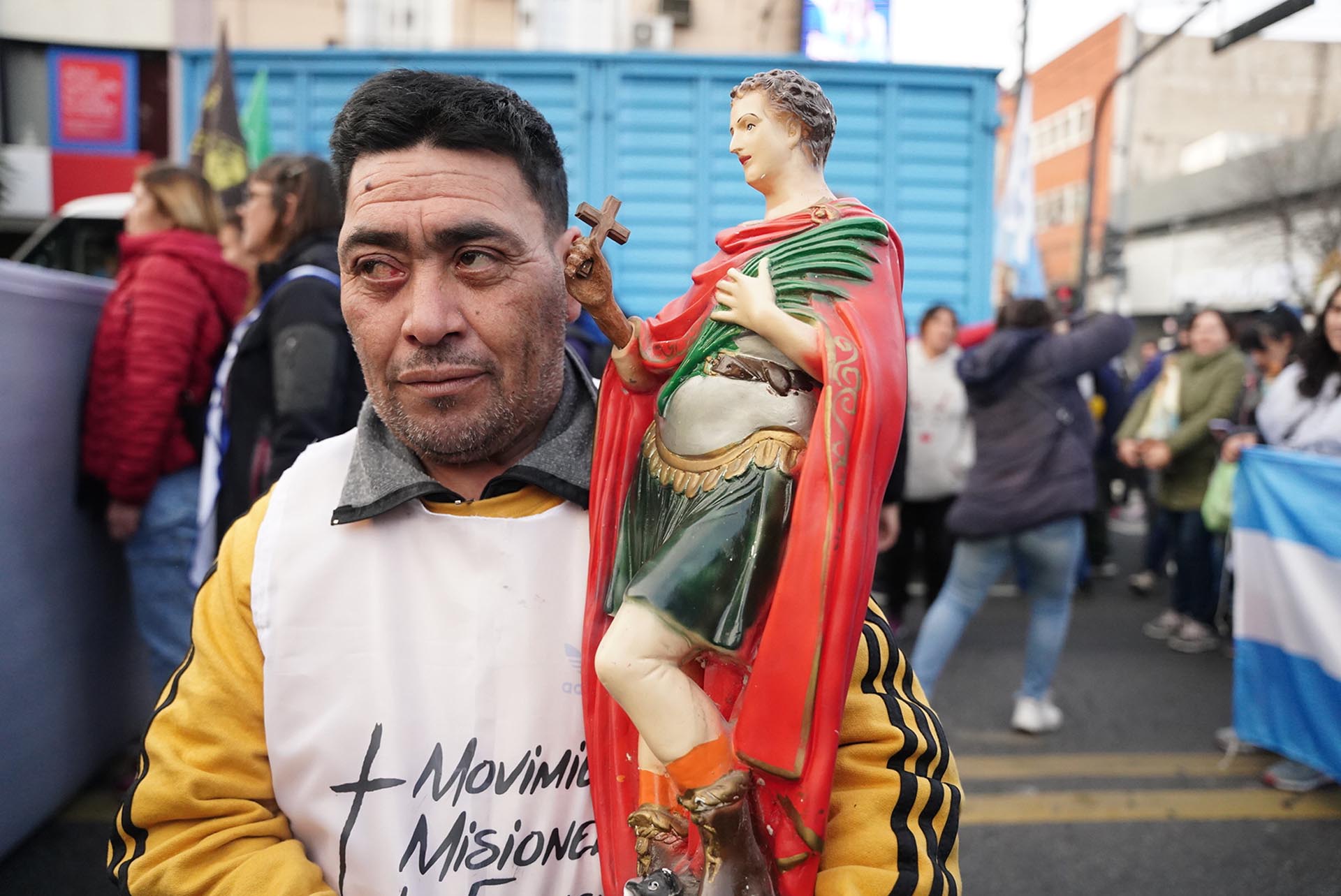 The Cathedral received faithful from all corners of the country (Credit: Franco Fafasuli)

Already at 8 in the morning, long lines began to accumulate at the entrance to the Sanctuary. People came from all corners of the country, including even citizens from neighboring countries. There were from employees who wanted to thank for their current situation to the unemployed who urgently need to find a job to make ends meet. 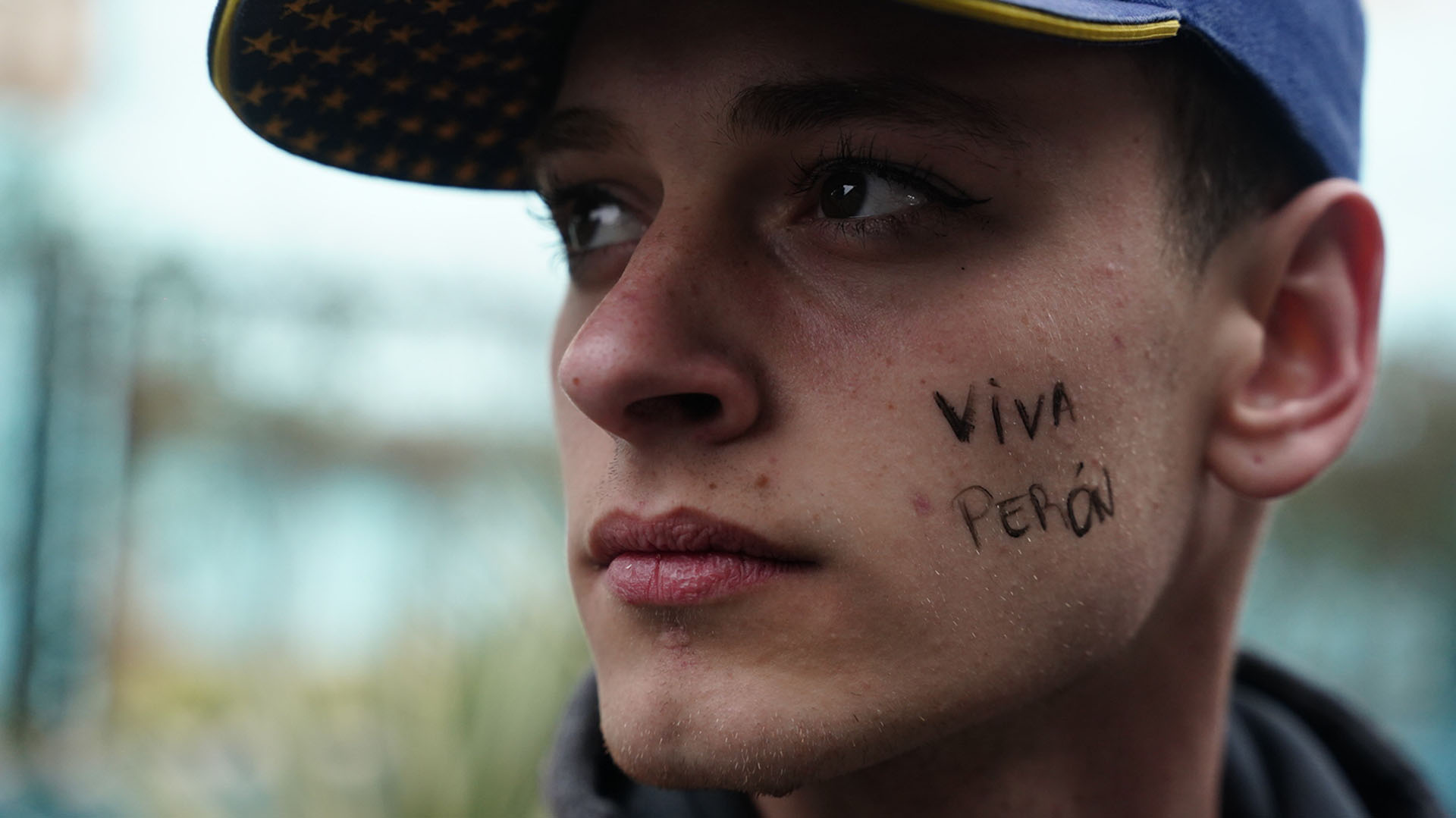 “Long live Perón”, said the provisional tattoo of a young man who participated in the march

“Going through the massive queues waiting for the opening of the sanctuary of San Cayetano, and also thinking about the enormous number of brothers who will attend throughout the length and breadth of the country in the chapels and parishes of San Cayetano, asking for peace, bread and work, It occurs to me to say in the light of this Gospel that the sensitivity towards the hunger of our people is what guarantees an education for peace”, affirmed the bishop of San Isidro and president of the Argentine Episcopal Conference (CEA), Monsignor Oscar Vicente Look. 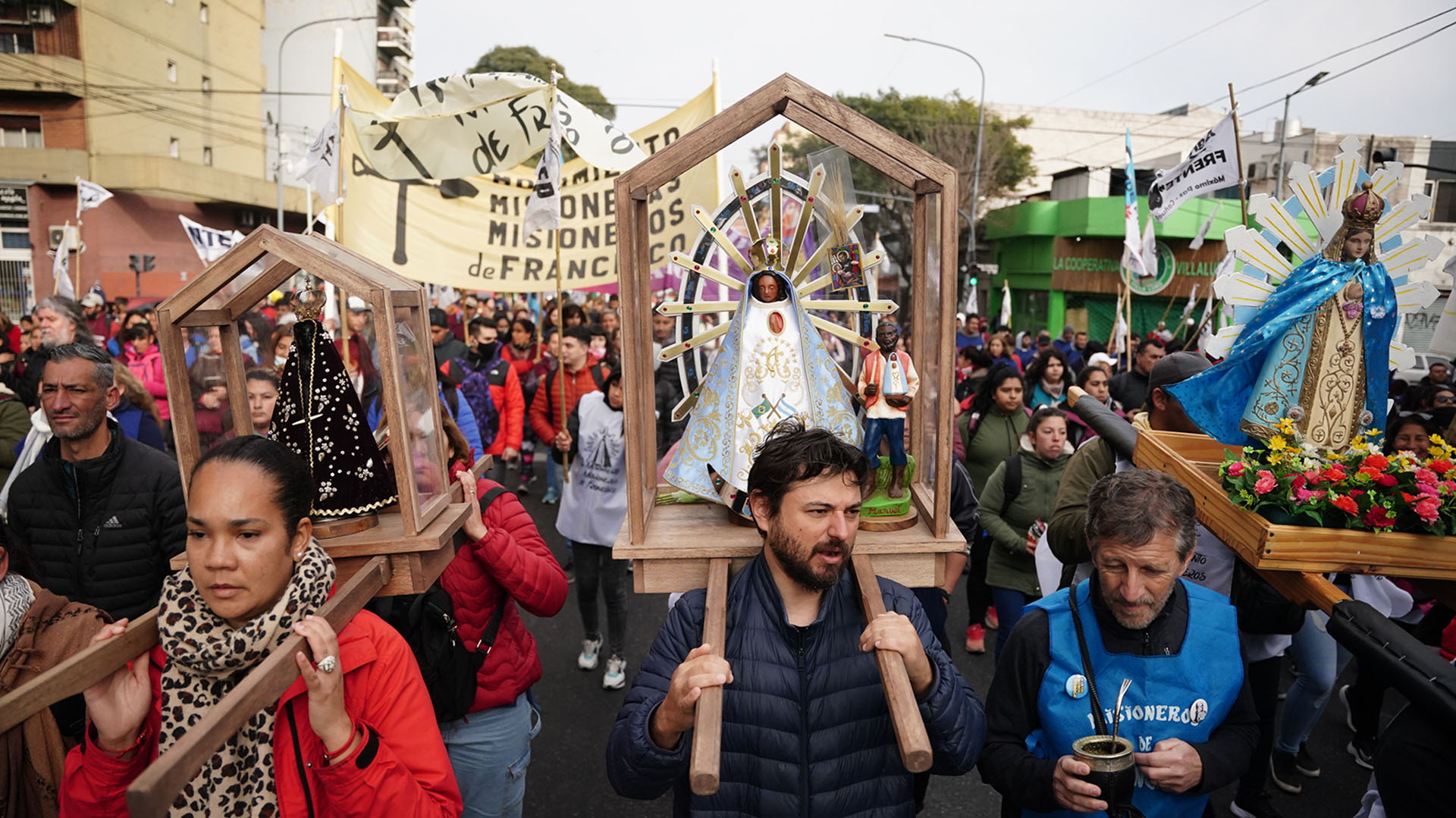 Grabois carries on his shoulders, a statuette of the Virgin Mary 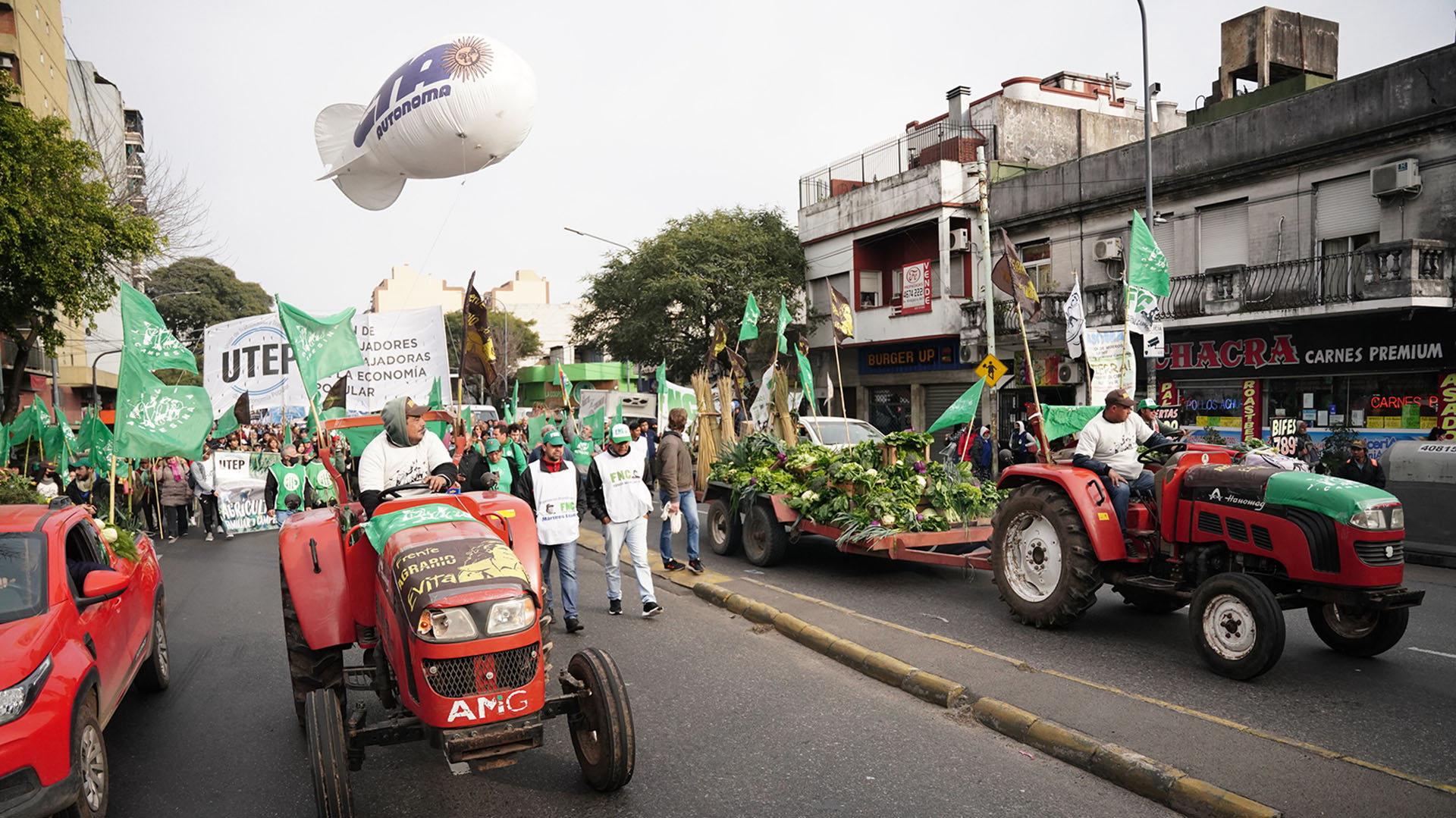 Rural workers also joined the march with their tractors

The motto of the current edition of the event is “Thank you San Cayetano for joining us, help us take care of ourselves as brothers.”

It is expected that for the first time, the highest ecclesiastical authority in the country will participate and publicly show its support for the march that will end in downtown Buenos Aires. It is believed that Poli will bless the tools that will be raised in prayer by the group of unemployed workers from the Union of Workers of the Popular Economy (UTEP), who will lead the 16-kilometer pilgrimage. 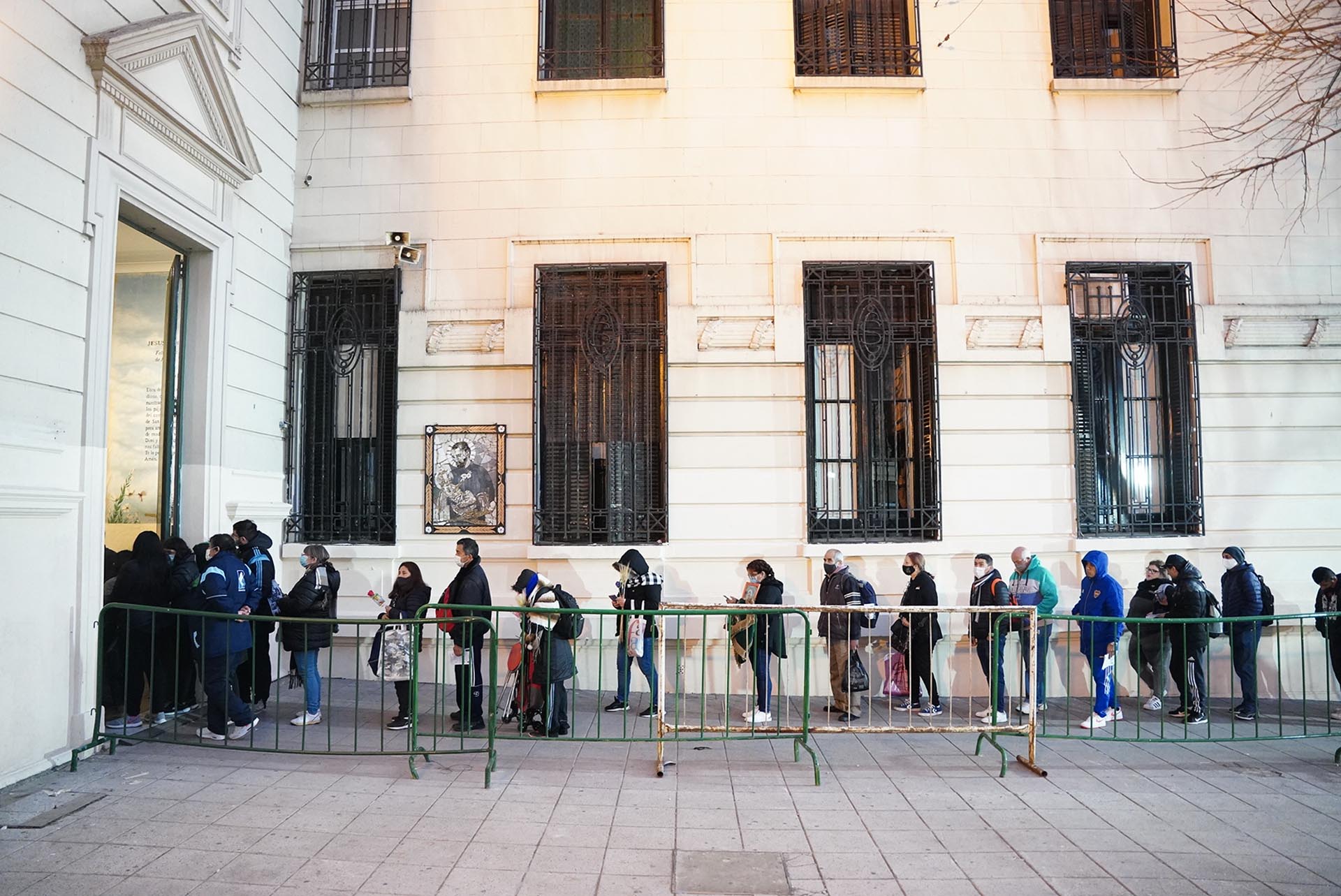 The doors of the Sanctuary opened during the early hours of today (Credit: Franco Fafasuli)

The tens of thousands of participants in the demonstration demand basic emergencies from the government of Alberto Fernández: “Land, Roof and Work”. To the prayer, this year two “P” were added, peace and bread.

The general law of the “three Ts” presented in parliament, and which includes the Universal Basic Salary (which the Government advanced but did not promote), is, for social organizations, a necessity that Pope Francis exposed in the message of the World Meeting of Popular Movements carried out in the context of the Pandemic on October 16, 2021 “so that no human being lacks the minimum essential for the consumption of their basic needs”.

As exclusively reported by this outlet, the march led by Grabois has an outstanding pilgrim who was not present in previous calls: Gustavo Beliz, the now former Secretary of Strategic Affairs. The friend of the President who “indeclinably” resigned from office at the same time it was confirmed that Sergio Massa, until then president of the Lower House, landed in the National Cabinet as Minister of Economy with expanded powers. Beliz did not speak on the subject. 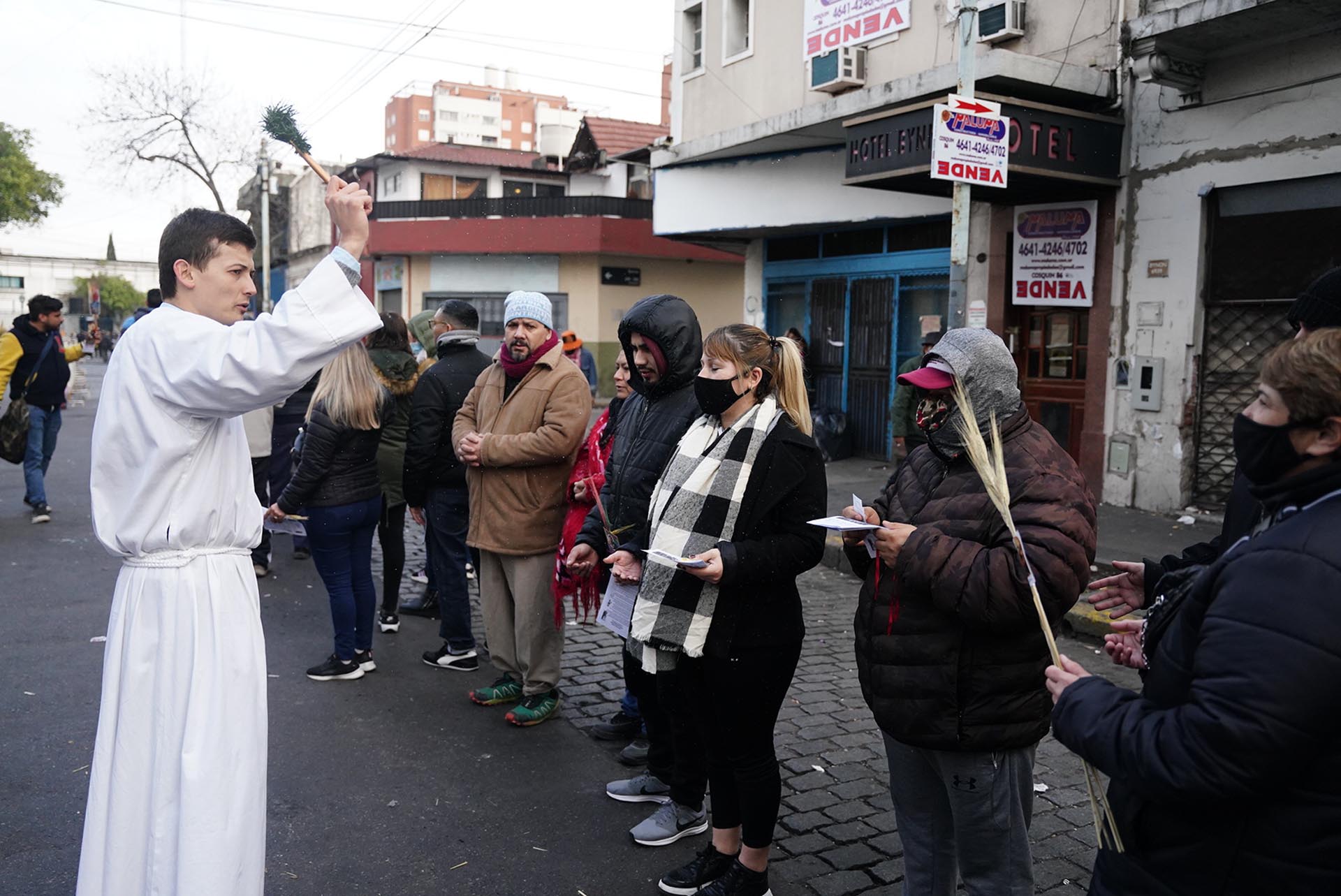 The faithful receive the attention of a representative of the Church while queuing (Credit: Franco Fafasuli)

The slow journey, crossed by faith and imperatives, will end at the intersection of Avenida de Mayo and 9 de Julio. This year, unlike the previous five, the closing speeches will not have the Casa Rosada as a backdrop. A gesture from the organizers to the Executive Branch in the midst of the internal crisis that led to changes in officials and reorganization of the line-up of ministries.

March of San Cayetano: the social movements related to Alberto Fernández insist with their claims to the Government