Severe heat and drought: here’s what to expect for the coming week in France 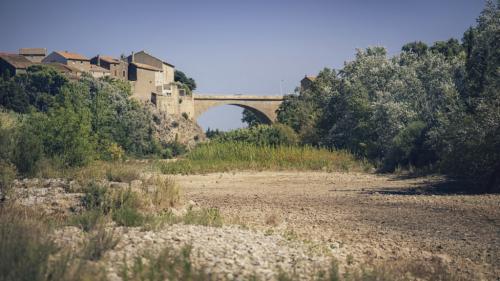 It’s not time for refreshment yet. For the second week of August, Meteo France again forecasts high temperatures in France. The third heat wave, which began in France on July 31, is expected to last until August 15. “We are talking about a heat wave that lasts almost 15 days, it’s very long”, notes François Jobard, forecaster at Météo France, with franceinfo.

The multiplication of these meteorological phenomena is largely linked to global warming. “As temperatures rise, the intensity of heat waves and temperature records increase twice as fast,” explained Jean Jouzel, climatologist, glaciologist, former vice-president of the IPCC, to franceinfo in June. Here’s what the next few days will look like.

The second week of August will be marked, like the previous one, by high temperatures. A fourth heat wave after the three that have already hit France? “There were uncertainties as to whether it was going to be a third or a fourth wave. With the values ​​recorded on Saturday August 6, we can finally say that the third heat wave, which started on July 31 , will continue all next week”, specifies François Jobard.

After a drop in temperatures “by the northwest of the country at the end of the week”, mentioned Friday evening, Météo France is forecasting further temperature increases from Sunday 7 August and for the next few days. Temperatures that will remain very high until next weekend. “Temperatures are already starting an upward trend this Sunday [7 août]. They will increase day by day, reaching very high levels, including in the northern half “by the end of the week, warns the forecaster.

The second heat peak of this third wave will occur at the end of next week, around Friday. In Paris, 30 degrees should be reached on Monday and exceed them from Tuesday. “Each day will be warmer overall, reaching 35 degrees in the capital on Friday,” anticipates François Jobard.

This new peak will however be less intense than the second heat wave of the summer, which occurred in mid-July. The absolute temperature records, some of which had been broken on this occasion, should not be reached.

The forecaster does not exclude, however, that monthly records will be reached locally, for example in the South-West, where we can have peaks at 39 degrees from Tuesday. “The situation will then settle down, remaining at very high levels”. With a subtlety all the same: in comparison with the second heat wave, this new peak will be of less intensity.

A new episode of heat wave is “probable”

A new episode of heat wave is also expected over a large part of France. “It is likely that certain regions or departments will experience heat wave orange vigilance next week”, explains François Jobard, without being able to specify the territories potentially concerned.

In the 2nd half of the week, temperatures will be warmer and warmer across the country. New episode of #heat wave likely in many regions with temperatures that will remain very high until next weekend. Air mass from Saturday August 6th to Sunday August 14th pic.twitter.com/Uhw3CPOZhU

Sun and wind aggravate the drought

The lack of significant rainfall forecast for next week is expected to worsen the ongoing drought in France. “Stormy rains, there will be, but mainly on the relief or the PACA region. This could very locally improve the situation. But, on the vast majority of the country, it will remain desperately dry”, deplores François Jobard.

In addition to the lack of rain, very sunny conditions and north-easterly winds should be added. “The sun and the wind are drying out, the soil will still lose water this week”, concludes the forecaster. As Météo France reminds us on his siteJuly 2022 was also marked by a record rainfall deficit, becoming the driest July and the second driest month since measurements began.

️ Very strong threshold #heat (>35°C) which can be reached from Sunday at #Toulouse and continue through next week. Coming week also influenced by the return of#autan (mid-week), once again amplifying the dryness. #Secheresse2022 pic.twitter.com/WpCjGMMIu1