A new scourge, the fruit fly, threatens the Senegalese mango 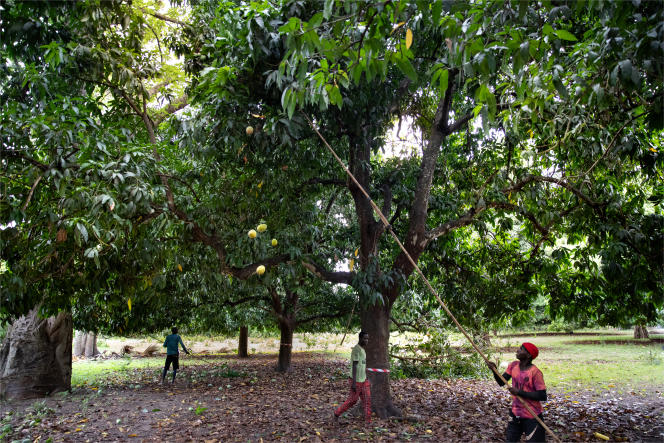 In the orchard of the village of Ediamate, in Casamance, a region located in the south of Senegal, a dozen young men climb trees more than six meters high to shake the branches and make a rain of mangoes fall. sink with a dull sound into the damp ground. Downstairs, the women, bent double, sort them into heaps that will be loaded onto a truck-trailer. “All the fruits marked with black dots have been bitten by flies. They are put aside because they are not edible”, explains Ibrahima Khaly Diatta, one of the villagers who works, a long pole in his hand.

The fruit fly, of the Tephritidae family, is easily recognizable by its yellow spots on the thorax. Originally from Asia, it was first identified in Kenya in 2003, before rapidly spreading across the African continent. It was detected in Casamance a year later and has since wreaked havoc in Senegal, especially during the hot rainy season, which coincides with the mango harvest, from May to October. The female pricks the ripe mangoes to lay her eggs there which will become larvae which feed on the pulp and quickly rot the fruit.

These invasive pests are spreading more and more, first because of climate change, with rising temperatures and disruption of rainfall, then because of increasing international trade and travel, is alarmed the Food and Agriculture Organization (FAO) of the United Nations.

The impact on producers’ harvests is enormous, especially in Casamance, which provides around 60% of the 150,000 tonnes of mangoes produced each year in Senegal. In the village of Tiobon, producers estimate the losses at more than 50%. “The fly prevents us from having substantial cash inflows, while the mango is our first source of income”, worries Malick Coly, one of the producers of this collective orchard of a thousand mango trees, scattered between their houses and the sacred grove, which supports twenty-two families. “We sold the kilogram at 150 CFA francs [environ 23 centimes d’euros]. It’s not a good price, but we want to sell quickly, even if it means harvesting less ripe fruit, before the rains and the flies come and the mangoes rot,” continues Mr. Coly.

On the narrow tracks that go from one village to another, Ali Ndoye, a trader called “bana-bana” (who sells between several regions), passes with his scooter filled with juicy fruits just harvested. For him, the risk of arriving with rotten goods at the Dakar market is high. “I negotiate a lower price with the producer, because I have to take into account the losses,” he explains. And the danger is even greater for the “bana-bana” who work for export to the European Union (EU), while the fruit fly is considered a “quarantine” insect (i.e. i.e. subject to strict regulations) and that shipments must arrive unscathed.

You have 59.38% of this article left to read. The following is for subscribers only.