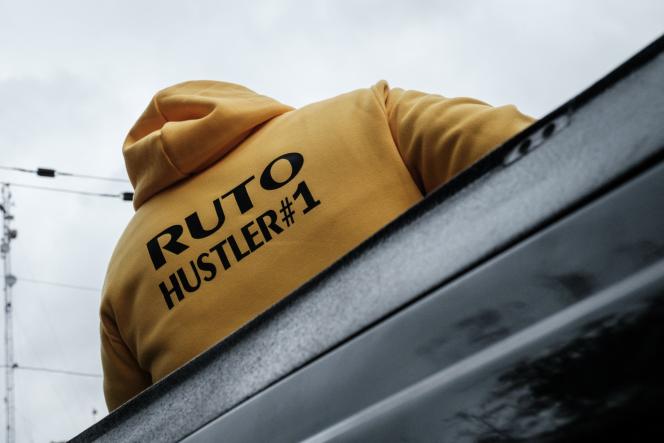 Kenyan Vice President William Ruto addresses the crowd from a car during a rally in Thika on August 3, 2022. YASUYOSHI CHIBA / AFP

Throughout a campaign waged at full speed, William Ruto presented himself as a self-made-man with an exceptional destiny: that of a peasant’s son from the highlands of the Rift Valley who irresistibly rose through the ranks of a Kenyan power largely dominated by the great political dynasties. In other words, an autodidact about to complete his long ascent to the top of the state.

The last step of the epic, accession to the State House, comes to him on Tuesday, August 9. The sulphurous 55-year-old vice-president is neck and neck with his rival, Raila Odinga, in the polls. A duel he hopes to win by presenting himself as the candidate of “ordinary” people, mired in an economic crisis marked by inflation and exasperated by corruption. Even if it means forgetting that he has been the president’s right arm for nine years.

As a teenager, he sold peanuts and chickens, barefoot, on the side of the roads

To overthrow the political aristocracy, embodied by the current head of state, Uhuru Kenyatta, and Raila Odinga, both heirs to the strong men of post-independence Kenya in 1963, William Ruto set out to attack the votes of those he calls the “resourceful”, those who find it difficult to make ends meet with odd daily jobs. He calls himself “the hustler-in-chief”. To illustrate this, his coalition, Kenya Kwanza (Kenya First), has adopted a wheelbarrow as its campaign image. And its flagship measure is to create a fund to help precarious workers.

Read also: Article reserved for our subscribers As the presidential election approaches in Kenya, “fake news” abounds on TikTok and Facebook

A man of modest origins who grew up in the county of Uasin Gishu (west), William Ruto likes to fuel his legend as a man of the people. He would have bought his first pair of shoes at 15 years old. Before that, he sold peanuts and chickens, barefoot, on the side of the roads in this region known to be the homeland of long-distance runners.

Resourceful, William Ruto was certainly so during his adolescence, before being spotted by President Daniel arap Moi (1978-2002), who propelled him to the heart of power. A member of the Kalenjin community like himself, the young Ruto first led the Christian association at the University of Nairobi in 1992, then was very quickly appointed treasurer of the youth league of the Kenya African National Union (KANU, the party then in power) and proved itself in the field.

You have 69.08% of this article left to read. The following is for subscribers only.

Monkeypox: Isolate your pet? They confirm the first contagion of the virus to a dog

2022 European Championships: a historic treble in triathlon, Jeanjean in gold, a disappointment in the gym… What to remember from the third day