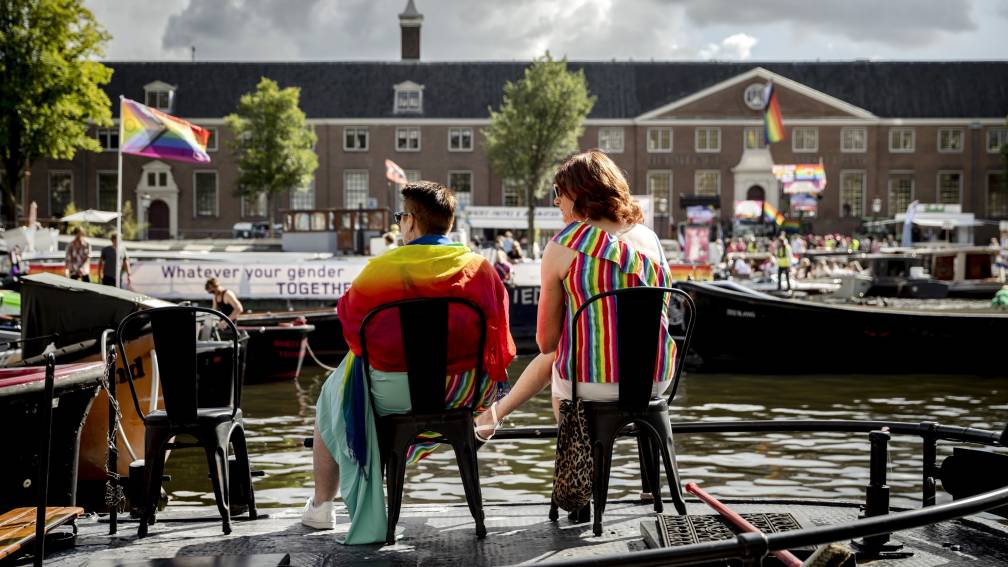 Hundreds of thousands of interested people have come to Amsterdam to watch the Canal Parade. The event is in full swing, with a procession of eighty boats. After two years of absence due to corona, the world-famous boat parade on the canals is held for the 25th time.

The Amsterdam police say that it will be very busy in some places in the city. People are asked to avoid ‘the 9 Streets’, among other things:

All participating boats have their own message, inspired by the theme ‘My Gender, My Pride’. With this theme, the organization calls for extra attention for transgender people and people who are non-binary. The boats sail the well-known route over the Amstel and the Prinsengracht.

One of the boats at the front of the procession is that of the municipality of Amsterdam, with a dancing mayor Femke Halsema on deck. At the very front, the LGBT Asylum Support boat sails, with about forty asylum seekers on board. Some of them have had their asylum applications rejected. The boat has been given a place of honor in the procession in protest.

Boats from LGBTI organizations, gay restaurants and companies that support the community also sail along. The police and the national government, among others, have their own boat. For the first time, the highest-ranking soldier in the Netherlands, Commander of the Armed Forces Onno Eichelsheim, is sailing on the boat of the Ministry of Defence. A pan-Asian boat will also be sailing for the first time.

Mayor Halsema on the boat of the municipality of Amsterdam

Spectators along the route of the boat parade

The farmers are also present in the center of Amsterdam today. At the starting point of the tour is a boat with colored cows and a pink tractor. They also hand out pink handkerchiefs along the route. They want to draw attention to their position in the nitrogen crisis.

The boat parade left at the beginning of the afternoon and has now been underway for a few hours. The royal couple wishes everyone present at the Canal Parade a lot of fun today. In an Instagram message, King Willem-Alexander and Queen Máxima congratulate Pride Amsterdam with the 25th edition.

“We wish everyone the freedom to be who you are and to love who you want!” The post is widely shared and liked on social media.

In addition to the well-known boat parade, there were many other events in the capital last week. Pride Week started last weekend with the Pride Walk, a demonstration for equal rights for LGBT people worldwide. Lectures, film screenings and street parties are also organised. Tomorrow the week will be concluded with a party on Dam Square.

The boat parade will probably look different in the future. According to LGBTI organizations, it should be more inclusive and less commercial. Research commissioned by the municipality shows that the community wants to place less emphasis on celebration and more on emancipation and protest.

‘Pride is still very much needed’, according to some participants:

‘Pride still very much needed, this the day with the most smiles for me’

Salman Rushdie, a symbol of the fight for freedom of expression

At the Swimming Euros, Popovici breaks the world record for the 100m freestyle

These kids are very good at fierljeppen