Ligue 1: AS Monaco is doing well in Strasbourg, three days before its return match against PSV Eindhoven 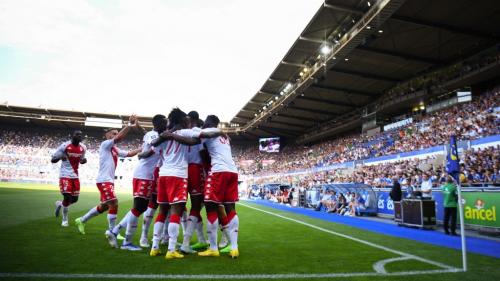 While waiting to know its European future, AS Monaco has ideally launched its season in Ligue 1. Victorious over RC Strasbourg (2-1) at the Meinau stadium, on this first day of the championship, Philippe Clément’s men have signed a small feat on Saturday August 6: last season, only three teams had brought down Racing on its lawn (Lille, Angers and OM). The Monegasques had also lost there at the start of the final sprint. This time, the players of the Principality made their law reign, even without Ben Yedder, preserved on the bench.

Undoubtedly helped by their early preparation for the play-offs for the Champions League, the Asemists appeared in their legs on the lawn of Meinau. The people of Strasbourg too, during the first thirty minutes. The rest was more complicated for the Alsatians, who spent a lot of time running behind the ball. All the more so after the opening of the Monegasque score at the end of the first act.

At the end of a corner deflected from the head by Axel Disasi, Krépin Diatta fired a clear volley from outside the area, which the excellent Matz Sels could only watch pass (1-0, 43rd). The Belgian doorman of Racing had until then delayed the deadline, in particular on another recovery, signed Jakobs, before saving the furniture for a long time after returning from the locker room. Without him, Racing would undoubtedly have sunk.

43 – Only Gérard Banide (45) and Claude Puel (44) have collected more points than Philippe Clement (43) after 20 Ligue 1 appearances on the Monaco bench. Paw. #RCSAASM pic.twitter.com/lEIVbkD8W8

But a good goalie can’t do everything. When Sels fended off a pivoting strike from Gelson Martins, who had already come close to opening the scoring in the first period, his defense did not follow him, leaving an opportunistic Sofiane Diop to make the break (2-0 , 53rd). Physically superior and masters of the ball, the Monegasques then continued to push, tossing the Strasbourg players from one end of the field to the other.

Habib Diallo certainly gave RC Strasbourg hope with a fine header (2-1, 65th), but for a long time the Alsatians did not seem able to get back into the game. We had to wait for added time to see them attack the princely cage. Habib Diallo thought he equalized with a header, before his goal was disallowed after consulting the VAR. Alexander Nübel then made two classy saves to secure a deserved victory for ASM, although Racing has reason to be frustrated.