Gaza: what we know about the Israeli strikes targeting the Islamic Jihad 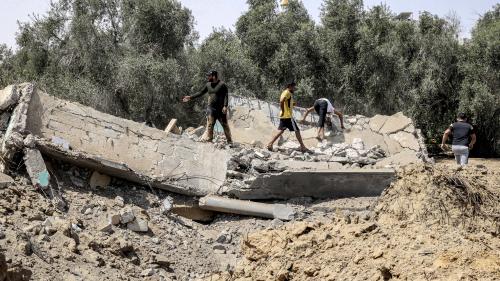 We have to go back to May 2021 and the eleven-day war to find such a level of violence between Israel and the armed organizations in Gaza. Since Friday, August 5, the Israeli army has been carrying out raids targeting Islamic Jihad in the Gaza Strip, which have left at least a dozen dead. The Palestinian group, considered terrorist by Israel, the United States and the European Union, responded with rocket fire on the Jewish state. Here is what we know about this renewed tension.

At the origin of the tensions, the arrest of a leader of the Islamic Jihad

At the origin of the return of violence between the two enemies, a raid carried out by the Israeli security forces Monday August 1 in Jenin, in the north of the West Bank, during which they arrested a leader of Islamic Jihad, Bassem Saadi. In response, the Al-Quds Brigades, the armed wing of Jihad, announced in a press release “the general mobilization” and the increase in “the state of preparation of the” mujahideen [combattants]”to face “the aggression of which the great leader Sheikh Bassam Saadi and his family were victims in Jenin”.

This declaration made the Jewish state fear reprisals from the Gaza Strip, an enclave controlled by the Islamists of Hamas and where Islamic Jihad is very present. On Tuesday, the Israeli army ordered the closure of several roads along the border with the Gaza Strip.

On Friday, shortly after the strikes, Israeli Prime Minister Yair Lapid said on television that Israel had “carried out a precise counterterrorism operation against an immediate threat”. An Israeli military spokesman, Richard Hecht, presented the operation as a “preemptive attack” against Islamic Jihad.

At the end of the day on Friday, the Israeli army estimated that it had killed 15 Islamic Jihad fighters in its strikes targeting in particular, according to it, weapons manufacturing sites. The Ministry of Health in Gaza has reported 12 dead, including a five-year-old girl and one of the leaders of Islamic Jihad, Tayssir Al-Jabari. The ministry also identified more than 80 injured. Israel continued to bombard Gaza on Saturday.

In a statement released on Saturday, the Israeli army announced the arrest of 20 people during operations carried out by soldiers and Shin Bet security service agents in the morning in the West Bank, “of which 19 are members associated with Palestinian terrorist organization Islamic Jihad”.

“More than 100 rockets” launched by the Al-Quds brigades

Islamic Jihad vowed on Friday that it would take revenge and target Israeli towns. Its armed wing, the Al-Quds Brigades, claimed to have fired “more than 100 rockets” from the Gaza Strip into Israel, warning that it was its “first response” in reaction “to the assassination of the commander chief Tayssir Al-Jabari and his brother martyrs”.

The Israeli army lists 70 projectiles fired from Gaza, eleven of which landed inside the Palestinian enclave under Israeli blockade. No casualties or damage were identified by the rocket fire in Israel, according to the army. “Most of the mortar shells fired by the Islamic jihad have so far been harmless,” said Charles Enderlin, journalist and former France 2 correspondent in Jerusalem, on franceinfo this Saturday.

Raids that could last “a week”

In Ramallah, in the West Bank, the Palestinian presidency condemned “Israeli aggression” and held Israel responsible for what it describes as “dangerous escalation”. An escalation for which the Jewish state is preparing, according to journalist Charles Enderlin. “Significant infantry and armored units are deployed around Gaza for a possible land operation, 25,000 reservists are recalled, there is talk of setting up an evacuation plan for residents of the localities… All the elements are reunited”, he described on franceinfo.

On Saturday, the Israeli army said it was preparing to carry out raids for “a week” in the Gaza Strip. It specifies that it “is not currently conducting negotiations with a view to a ceasefire”, even though Egypt is trying to establish a mediation to appease the situation.

These are the most beautiful pictures taken with a phone