Israel is continuing its strikes in the Gaza Strip against the Islamic Jihad organization on Friday, August 5, and estimates that it killed fifteen fighters during this “preventive attack”. The Islamic Jihad, an organization considered terrorist by Israel, the European Union and the United States, has confirmed the death of one of its leaders, Tayssir Al-Jabari. The Ministry of Health in Gaza, for its part, reported ten dead, “including a five-year-old girl”, and 75 injured.

The first salvo of Israeli strikes notably targeted Khan Younis and a residential area in the center of Gaza City, Palestinian witnesses and security sources said. In Gaza, AFP journalists saw the injured being evacuated by the emergency services, firefighters working to put out fires and residents crowding into morgues.

“The Zionist enemy started this aggression and must expect us to fight relentlessly… There will be no truce after this bombardment,” said Islamic Jihad Secretary General Ziad al. -Nakhala, in an interview with Lebanese television Al-Mayadeen. “There will be no red lines in this battle…Tel Aviv and other Zionist cities will be targets of resistance missiles,” he added. Hundreds of people attended the funeral of Tayssir Al-Jabari in Gaza in the evening. 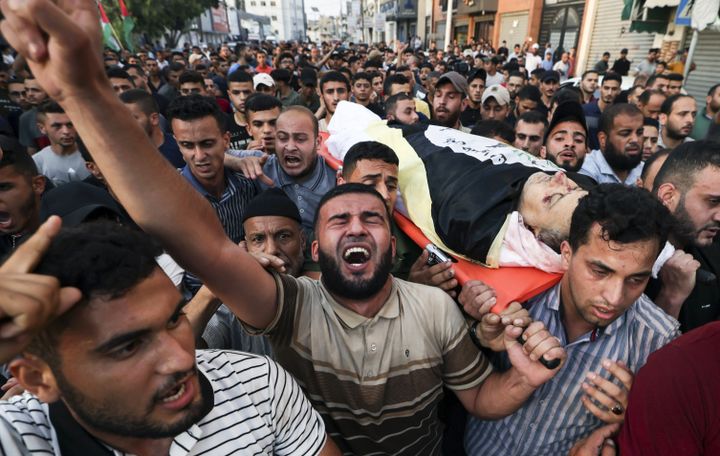 Hundreds of people attend the funeral of an official of the Islamic Jihad group, Tayssir Al-Jabari, on August 5, 2022 in Gaza. (MAHMUD HAMS/AFP)

In retaliation, the armed wing of the Islamic Jihad group announced that it had fired “more than 100 rockets” from the Gaza Strip towards Israel. Warning sirens sounded in several southern localities, but no casualties or damage were identified, the Israeli army reported. It reported 70 projectiles fired from Gaza, eleven of which landed inside the Palestinian enclave under Israeli blockade. The remaining rockets were intercepted by the Israeli missile shield or fell in uninhabited areas in Israel.

The Israeli raids come after Monday’s arrest of an Islamic Jihad leader in the occupied West Bank, Bassem Saadi. The Israeli authorities feared reprisal attacks from the Gaza Strip, controlled by the Islamists of Hamas and where Islamic Jihad is well established. The army had deployed reinforcements in the area adjacent to the Palestinian territory, including tanks.

“To our enemies, and especially to the leaders of Hamas and Palestinian Islamic Jihad, I would like to insist: your time is running out. The threat will be eliminated one way or another,” Israeli Defense Minister Benny said. Gantz in a statement. Israeli Prime Minister Yair Lapid assured him that the security forces would act “against Islamic Jihad terrorists to eliminate the threat they pose to the citizens of Israel”.

Weather in Tonala today: the forecast for Thursday, August 11, 2022