The first ship full of agricultural products has meanwhile set sail from Odesa: on to the world food market. For the Dutch farmer in Ukraine Kees Huizinga, the concerns have not gone away. ‘If the Russians fire one rocket at Odesa, everything will stop again.’

The dust swirls high, the engines roar. Row after row, Kees Huizinga’s combine harvesters shave the wheat twigs. The proceeds disappear through a trunk in a trailer behind the tractor. Storks watch from the sidelines – watch for mice, not to take a piece of the pie. “This is the best time to be here,” the Dutch farmer beams. His men work in two shifts on the harvest, from early morning to late evening. “When you see those combines driving around like this, you forget the war a bit.”

On Monday, a first ship carrying agricultural products left the port of Odesa. The content, 26,000 tons of maize, is still left over from last season’s harvest. Since the Russian invasion of Ukraine, supplies have been piling up: Ukraine has laid mines in the sea, and Russian warships patrol the shipping lanes. “It is a first step, but I don’t trust the Russians at all,” says Huizinga about the grain agreement that Russia and Ukraine concluded on July 22 with the intervention of Turkey and the UN to restart exports.

In two decades, the Dutchman transformed a number of former collective Soviet farms near Uman into a thriving mega-corporation. On his 15,000 hectares of land, he grows vegetables, maize, sunflowers, rapeseed – and grain, of which 4000 hectares will be harvested this week. “When suddenly rockets flew around, I didn’t know what to expect,” says the farmer. In early spring, countless refugees stayed overnight on his property; Huizinga also supports the army by transporting second-hand pick-up trucks to Ukraine. “The Russians destroy a lot, but don’t get much ahead,” he now knows.

Fuel shortage continues to be a problem

Huizinga was lucky, he says. When the invasion began, his storage was already mostly empty; the prices were good enough to sell, he’d thought. His neighbor was waiting, and therefore has a big problem: a full storage, including last season’s wheat.

For himself, the lack of fuel remains a headache: while Huizinga’s company consumes 1.5 to 2 million liters of diesel annually, oil was only available to a limited extent until last month – a result of the Russian bombing of oil storage and lack of imports via the ports. Although Ukraine is now importing fuel from Europe on a large scale, the concern remains. “This is just the beginning of the harvest,” says Huizinga. “The grain is almost gone, but look: the maize still has to mature”, he points to the waxing plumes along the road.

In recent months, Kees Huizinga toured The Hague and Brussels to sound the alarm about the lack of exports. “My concern was primarily about our business, but therefore about all Ukrainian farmers, and the effect on grain supplies around the world.” His eyes drift back to his combines, which in no time mow a dozen football fields: “This is what makes Ukraine so efficient,” he says. “Ukraine is such a big player. If exports stop because the port is blocked, it’s just over.” Ukraine consumes a quarter of its own production, the farmer explains. Three quarters are exports. And, just like before with Huizinga’s products, it goes through the port of Odesa.

Grain on board the first ship from Odesa, which is allowed to leave under the grain agreement. 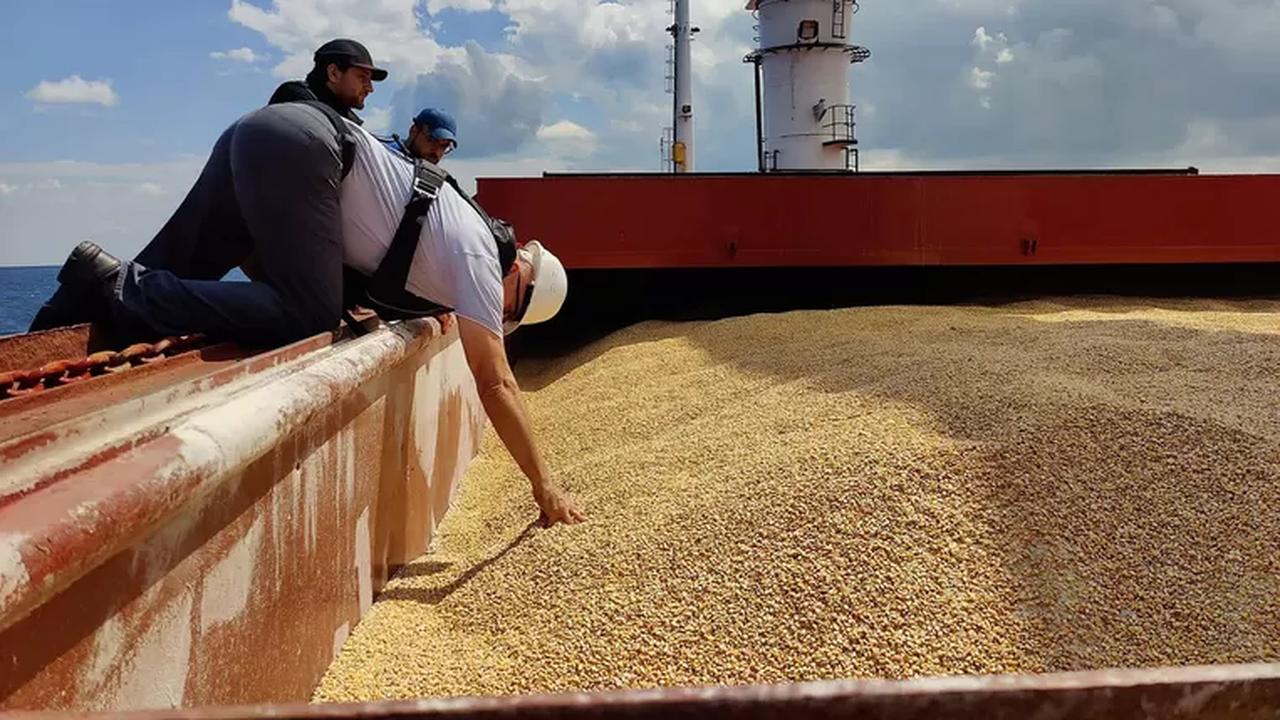 Grain on board the first ship from Odesa, which is allowed to leave under the grain agreement.

The departure of the first ship, last Monday, does not make the Dutch farmer optimistic. “I don’t believe the Russians. Because they’re shooting Ukraine, and hey, they say something different every day.” Huizinga has therefore developed an alternative for the coming year itself. If fifty lorries all make one trip a week, he will export his entire production to Romania in fifty weeks, he calculates. Yet there is no alternative to the port, he emphasizes. “We are a large company, speak English and have contacts. Our neighbor does not have that.” According to his estimates, Ukraine exports a maximum of 30 percent of the revenue by train and truck, Huizinga thinks, that’s all.

In the coming weeks it will therefore be ‘all or nothing’ for the world food supply, thinks Huizinga. “If the Russians fire one rocket at Odesa, everything comes to a halt. No insurer will pay more, no ship owner will send his ship here anymore.” Only pressure on Russia works; and it may be that the Russians also realize that they have an interest in normalizing food transport. “If all the people in Africa will soon have nothing to eat, everyone will know that Russia is the cause.”

Despite everything, the Dutchman is already preparing for the new sowing season. An empty field cannot exist with Kees Huizinga. “We continue to grow our crops. If we stop doing that, everything will be over.”

Conacyt: They report that the “Patria” vaccine is in the last phase

In Italy, the endless fall of the 5-Star Movement, undermined by defections