Clermont-PSG: the Parisians organize a festival for their first match of the season in Ligue 1 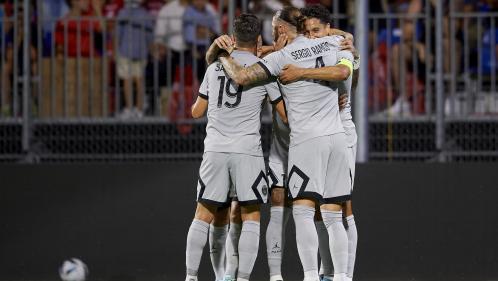 Paris is fine, thank you for him. Traveling to Clermont, PSG had a successful first game of the Ligue 1 season on Saturday August 6 (5-0). Sometimes flamboyant, sometimes managerial, the Parisians did not have to force their talent to beat a limited Clermont team. Scorer and triple passer, Neymar was particularly in sight. Hakimi, Marquinhos and Messi twice, including a wonderful comeback late in the game, are the other scorers.

And yet, the Auvergnats knew the song. Last year, Paris had already inflicted a knockout (6-1). “We tried, but on 2-3 accelerations, it hurts so much they play fast”, noted captain Florent Ogier, at the microphone of Canal +. The gap between the two teams was such that, without the prowess of goalkeeper Mory Diaw (7 saves), the gap in score could have doubled.

After this observation, this match served above all as a revealer for this PSG Galtier version. A week after his card against Nantes (4-0) during the Champions Trophy, he again seduced. Positioned as a free electron behind the attacking duo, Lionel Messi planted twice (80th, 86th). His second goal, a bicycle after a fine opener from Leandro Paredes, closed a promising display. “Very lively”, according to Galtier on Canal +, the Argentinian scored as many goals in eighty-six minutes as he had done in twenty-three days last year.

The connection between Messi and Neymar has, in the same sense, displayed a complicity rarely seen in the previous exercise, pending the return of Kylian Mbappé, absent on Saturday evening. The Brazilian appeared sharp. Even if the work was relative given the opposition, he “made efforts on the replacement”, appreciated his coach. A precocious scorer (12th), he distilled three caviars to Achraf Hakimi (26th), Marquinhos on a free kick (38th), and Messi (80th).

If Hakimi found himself in a shooting position, he owes it largely to Galtier’s tactical scheme. Piston in a 3-5-2, he enjoys almost total freedom and can express himself offensively. Here again, it will be necessary to observe his defensive behavior when the adversity will thicken.

We will be careful, in fact, to draw the slightest hasty lesson about this PSG new look. Exciting beginnings followed by sporting troughs and institutional crises, Paris has experienced more than one. Caution remains in order, but happiness is in good shape. “I have a very receptive, fun-loving group,” smiled Galtier. The technician arrived from Nice did not hesitate to launch the titi Warren Zaire-Emery, who became, at 16 years and 151 days, the youngest player in the history of PSG.

Vibrant 2-2 between Sporting FC and Alajuelense