Profeco: Is it mandatory to tip in Guadalajara? this we know

In Mexico it has become customary that when attending a restaurant, the diner, in addition to paying the total amount of their consumption, also leaves a symbolic amount of money for the waiter who attended them during their visit, which, as a rule, usually oscillate between 10 and 15% of your total bill, and it takes as a reason a tip for a good service.

But is this tip mandatory? This question arises after several diners have complained to the Federal Consumer Protection Agency (PROPHECY) after in different establishments they have been forced to pay this surplus from the account that, in a fundamental principle, is voluntary.

What is the tip?

As we have mentioned before, the tip is a monetary amount that the diner decides whether or not to give the waiter in relation to the quality of his service.

However, this monetary transfer, although it is recommended that it be between 10 and 15% of your total account, is completely voluntary and under the amount you want.

It is not mandatory to give a tip

Profeco has emphasized on more than one occasion that tips are a “voluntary gratuity and cannot be included in the account without the consent of the consumer”, so if the establishment requires a tip from the diner or includes it in their account, they can be reported. , because they violate the rights of the consumer.

On the other hand, if the diner does decide to tip the waiter, “you decide if you want to tip and you set the amount,” as Profeco says.

The only amount that you are obliged to pay is the one that corresponds to your consumption, and only you can decide if the service deserves or not to give a tip.

What to do if the tip is added to your bill

In accordance with the provisions of article 10 of the Federal Consumer Protection Law, there is no legal remedy to force you to pay a specific amount for the tip.

“It is forbidden for any supplier of goods or services to carry out actions that threaten the freedom or personal safety or integrity of consumers under the pretext of searching or investigating […] Suppliers may not apply coercive and unfair commercial methods or practices, nor abusive or imposed clauses or conditions in the supply of products or services. Also, they cannot provide additional services to those originally contracted that have not been requested or expressly accepted, in writing or electronically, by the consumer”, can be read in the article. 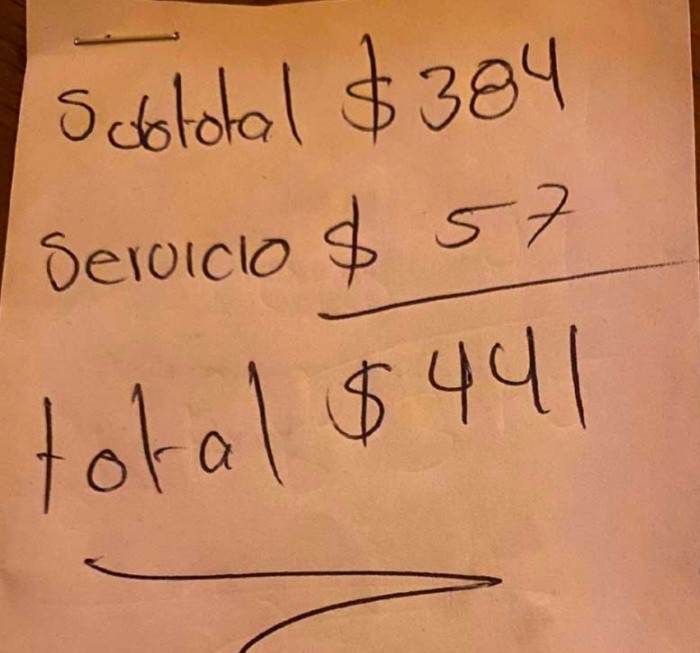 Several diners have made public their reports in which the tip is included in the total bill. SPECIAL

However, if the establishment wants to force you to pay the amount of the tip, you can request that the charge be withdrawn and that they allow you to speak with the manager or person in charge of the establishment to make the situation known. He better than anyone must know that this procedure is illegal, and that they cannot hold you in your place.

If they charge you the tip without consent, Complain!

Profeco urges citizens to report if, as a diner, they force you to give in to an establishment.

To do this, share different pathways through of which you can:

In any of the options you must specify the following details of the establishment:

On the other hand, but no less important, is the employment situation in which people who are dedicated to customer service, especially waiters.

Well, the labor supply of the restaurant establishments offer their vacancies with quite low salaries, most of them even below the minimum wage (currently $172.86 pesos), and they indicate tips (which, as we already mentioned, are merely voluntary and should not be considered as part of the service) as a supplement to the payment.

This situation has subjected the line’s employees to acute levels of stress and economic instability, because since tips are not a fixed income, they find themselves working under extremely poor and illegal salaries.

Let’s remember that the cost of your food already includes the cost of the raw material, its production, the cost of the service, VAT, and of course, the same part proportional to your land, so that, in no way, the establishments should add tips as a supplement to your salary.

According to the general director of the Tax Frequency trainer and consultant, Walter Carlos López Morales, tips are not wages. This is because They are not payments made by the employer in favor of its workers.because it is not the performance of a subordinate personal work.

However, if you find yourself working in terms in which your tips have been integrated as part of your salary, yes “they are taken into account to measure the granting of compensation or benefits that correspond to workers”, mentions Víctor Manuel Melo Posadas , president of the South Social Security Commission of the College of Public Accountants of Mexico (CCPM).

That is, tips should only integrate the salary for compensation purposes of the worker, and therefore, for purposes of quotas to the IMSS (Mexican Institute of Social Security) and contributions to Infonavit (Institute of the National Housing Fund for Workers), and they should be regulated by the Federal Labor Law, in such a way that they are established in a fixed manner from the promotion of employment.

Inflation: Gives up and falls slightly in the US

Investors in tax shelter miss out on millions

Streaming: Disney+ surpasses Netflix in number of total subscribers for the first time