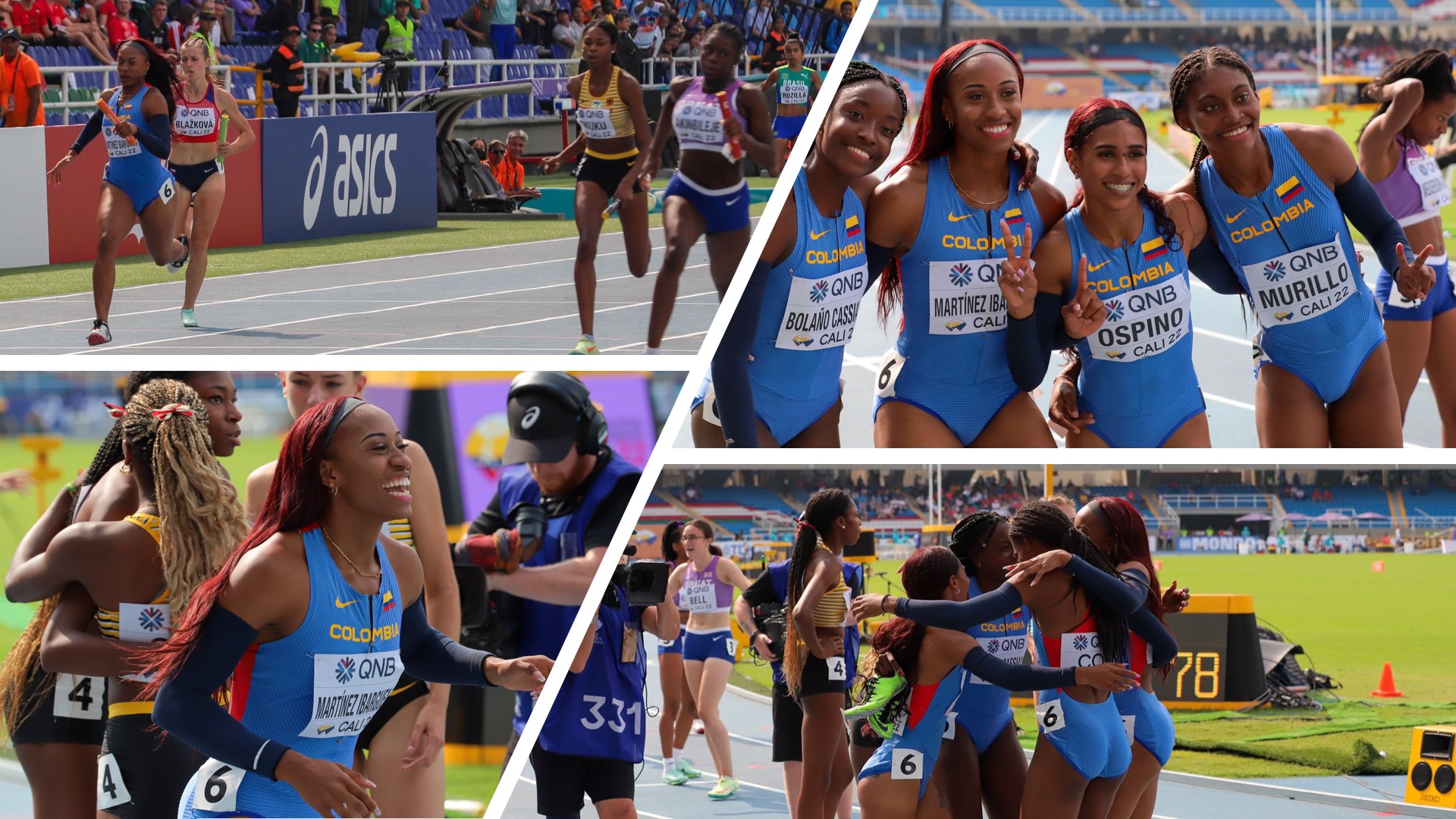 The athletes María Alejandra Murillo, Marlet Ospino, Mélany Bolaño and Laura Martínez Ibargüen shone on the afternoon of this Thursday, August 4, during the development of the 2022 Under-20 World Athletics Championships, which takes place in Cali, Valle del Cauca .

And it is that the female 4×100 relievers from Colombia have just qualified for the final of the specialty after occupying second place in the competition with a time of 44:34 which, as if that were not enough, is now a national record.

The first place went to the United Kingdom delegation, which recorded a time of 43:78, while third place was occupied by Germany with a time of 44:34.

The grand finale of the category will take place this Friday starting at 5:30 p.m. m, after learning the unfortunate news that the Colombian male quartet was disqualified and will now not be able to compete for the gold medal, due to an infraction committed in the first corner by one of the members (losing the line and invading the left lane).

Thus, Colombia seeks to leave its mark in athletic competition after having established a national record for women’s athletics in the 4×100 relay modality at the Pascual Guerrero Olympic Stadium in the capital of Valle del Cauca.

While the United States is the leader with 10 medals obtained so far in the competition, Colombia ranks 19th in the medals with a silver metal so far: 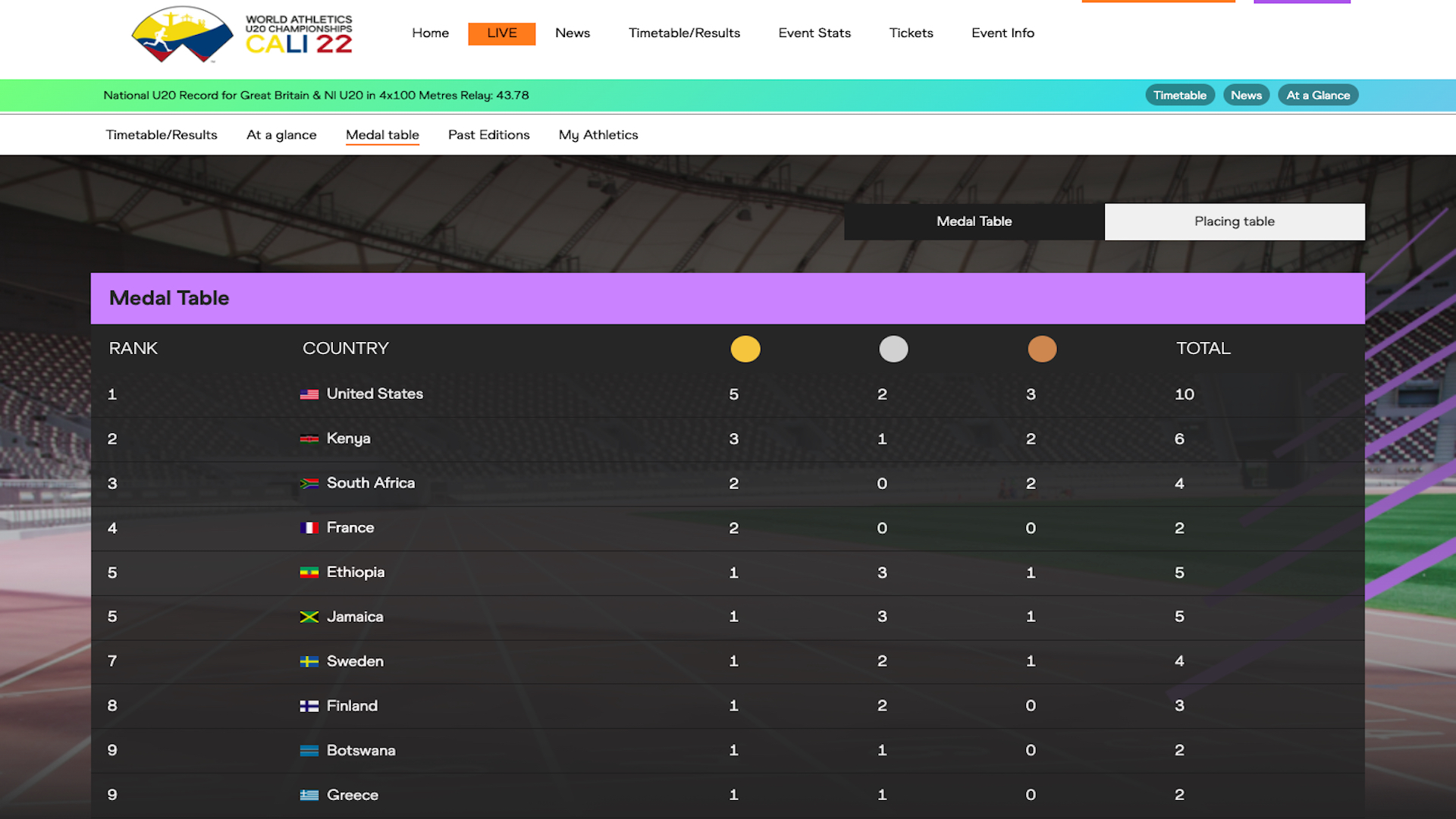 Medals of the 2022 U-20 World Championships in Athletics in Cali, Colombia, Thursday, August 4 / (Worldathletics.org)

The coffee athletes showed what they are made of to dream of the first gold medal for Colombia in the international sub-20 competition. Against the United Kingdom and Germany it will be the litmus test to hopefully eventually reach an Olympic modality in the orbital event scheduled for 2024 in Paris, France.

From the competition’s Twitter account, the four Colombians were congratulated for achieving the youth national record in Cali. In this regard, the organization of the sporting event spoke as follows:

NATIONAL RECORD! The Colombians gave it their all to destroy the stopwatch and leave the record of 44.34, with which they managed to get into the final of the 4x100m relay at #MundialAtletismoU20Cali. !!Congratulations, girls!! #CaliEsWorld 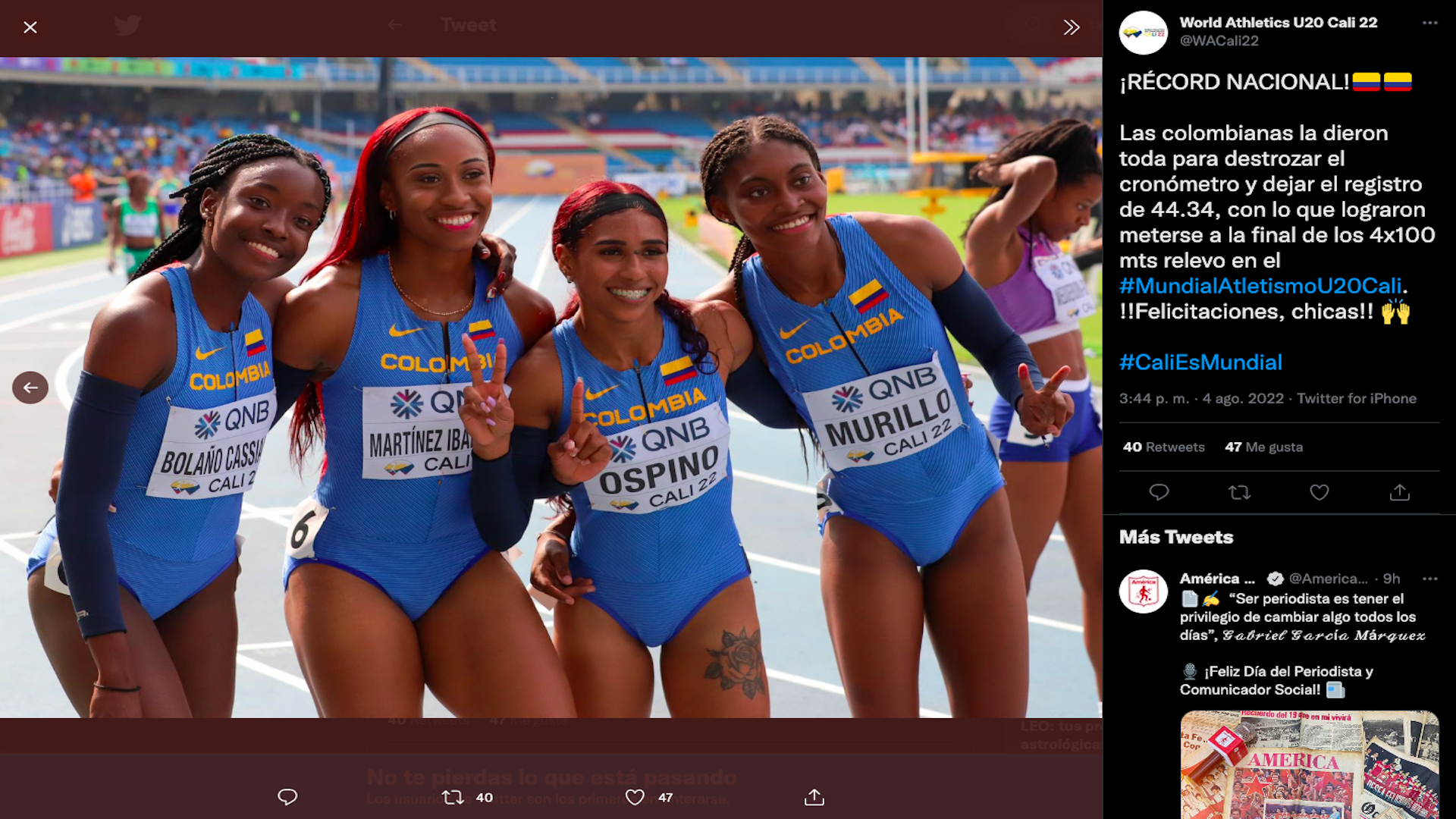 Valentina Barrios gave Colombia the first medal at the XIX Under-20 World Athletics Championships, held at the Pascual Guerrero Olympic Stadium in the city of Cali. In the javelin throwing event, the 18-year-old athlete recorded a throw of 57.84 meters on her fourth attempt, with which she secured the silver medal and, incidentally, the first medal for the host delegation so far in the contest.

The gold went to the great favorite from the qualifying tests, the Serbian Adriana Vilagos. With a remarkable throw of 63.52 meters on her third attempt, she set a record for the competition. On her part, the bronze was in the hands of a debutant, the Uruguayan Manuela Rotundo, who reached a distance of 55.11 meters in her sixth and last attempt, with which she beat Croatian Veronika Šokota.

In the final of the category, the athlete from Soledad, Atlántico, also made history in Colombian athletics. Her launch set a new national record in the under-20 category. She likewise becomes the seventh athlete to get a place on the podium in the history of the junior worlds.

Valentina Barrios wins a silver medal at the U-20 World Athletics Championships in Cali. The Colombian also set a new U20 national record with the launch that gives the country the first medal in the contest.

With her head held high: María Camila Osorio was eliminated from the WTA 250 in Washington Colombia U-20 women’s team is already in Costa Rica to participate in the World Cup Santa Fe is adrift “: Gerardo Pelusso does not see well the current situation of the cardinal team